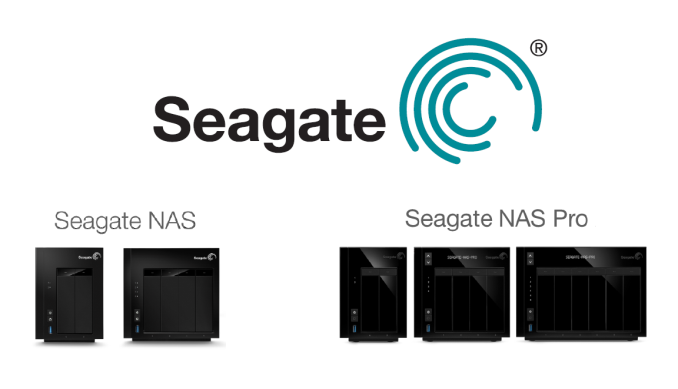 The fruits of Seagate's LaCie acquisition started to appear earlier this year with the Seagate Business Storage Rackmount Series. The NAS OS that was part of the unit was an evolved version of the software that we had expressed approval of in the LaCie 5big NAS Pro. In general, NAS OS has just the right amount of features to create a fully functional SMB NAS without overwhelming the user. On the hardware side, there hasn't been anything new in the desktop form factor from Seagate since LaCie's OS got adopted as the platform of choice for their SMB NAS units. That is changing today.

Seagate is introducing two new network storage lineups today, the Marvell ARMADA-based NAS and the Intel Rangeley-based NAS Pro. The NAS comes in 2-bay and 4-bay varieties, while the NAS Pro comes in 2-bay, 4-bay and 6-bay varieties. While diskless models are available, Seagate expects most customers to take advantage of the bundled offers with NAS HDDs filling the bays. Various NAS HDD capacities from 1 TB to 5 TB are available (the 5 TB versions will ship late August, but other capacities are shipping today). Both lineups target the SMB market, with focus more on data security and ease of use rather than all the bells and whistles that home users tend to want. Within the SMB market, Seagate heavily plays up their remote access / private cloud technology - The SDrive app (for Android & iOS) along with a corresponding desktop program enables remote access to the Seagate NAS seamlessly (no port forwarding to worry about). Keeping up with the needs of this market segment, the SDrive app ensures encryption with the user credentials before data is transmitted either from the NAS to the device or vice-versa.

The NAS 2-bay and 4-bay solutions target SOHOs with up to 25 employees. It uses a Marvell ARMADA 370 platform (single core ARMv7 CPU at 1.2 GHz) and comes with 512 MB of DRAM. Hot-swapping is supported and the rest of the hardware specs are pretty much the same as the competition in this price range. The warranty and included drive class are the aspects in favour of the lineup. On the 4-bay side, Seagate adopts the same SoC platform as that of the 2-bay version. The competition in this price range is a bit more varied with respect to the hardware platform (ARMADA XP, Marvell 6282 etc. are common), but the advantages held by the 2-bay hold true here also.

We have the NAS 4-bay version in-house for review and should get a better idea of the competitive performance in our testbed towards the end of the week.

The NAS Pro family is much more interesting, targeting workgroups of up to 50 employees. While the NAS lineup goes head-to-head with last year's models from the competition, the NAS Pro lineup stands unique for now. This is the first announced off-the-shelf NAS that we have heard of to sport the new Intel Atom processors. In the case of the NAS Pro, the particular SoC is the Intel Atom C2338, a dual-core Atom (new Silvermont architecture) CPU running at 1.7 GHz. The awesome aspects of this Rangeley part are obviously the 6 integrated SATA ports and 8 available PCIe 2.0 lanes. Up to 4x 1 GbE ports (or 4x 2.5 GbE) are supported in the Intel Atom C2338. AES-NI is available for accelerated encryption capabilities.

The NAS Pro family consists of 2-bay, 4-bay and 6-bay versions. Current Atom-based units from the competition (the Atom D270x-based ones) run at more than 2 GHz. But, make no mistake about the 'lower-clocked' Intel CPU in the NAS Pro. This is the real deal as compared to the previous generation Atom-based units, as it is based on a much improved microarchitecture and platform structure. We should get better performance and lower power consumption with the NAS Pro as compared to the competition (in addition to whatever can be gathered from the comparison tables).

Seagate's NAS OS has been hitting all the right notes in its evolution since LaCie got acquired. I have been using it for the last few days in the NAS 4-bay and I am very happy with the much cleaner interface. The isolation of the device management pages from the the apps section is welcome for the target audience. The companion SDrive app also works without issues. One must remember that the more full-featured NAS operating systems such as Synology's DSM and QNAP's QTS were not built in a day. I am quite sure with the focus that Seagate has on the NAS OS, it will reach those points of perfection eventually. For now, the third-party application support as well as the user experience is more than good enough for the target SMB market.

Coming to the business end of this coverage, the questions on the minds of most readers are probably related to why consumers should choose Seagate for their NAS needs. As I was getting briefed by Seagate on this announcement, I was reminded of my interaction with a few IT administrator friends of mine (they handle IT support for 100 - 500 employee companies in the Silicon Valley, handling NetApp filers and other such high end equipment). As the trend of working remotely catches on, it has apparently become necessary to equip the homes of some employees / individual contributors with a fast NAS to ensure data availability locally, as VPN access becomes too slow for some use-cases. When asked for suggestions, I immediately responded with a few from my experience reviewing NAS units. Unfortunately, none of my first-tier suggestions worked out - the top most requirement in their mind was a one-stop shop for the whole package including the disks. After exploring various options, they finally went with either Seagate or Western Digital Windows Storage Servers. I believe this is exactly the sort of situation where hard drive vendors have a very obvious advantage - particularly for the SMB market. Seagate already has a strong brand name, and, with products like the NAS and NAS Pro, they are creating everything - the drives, the chassis and the hardware/software design - in-house. Given the price point advantages over Windows Storage Server-equipped units, SMBs / SOHOs would do well to consider the NAS / NAS Pro units for their network storage needs.