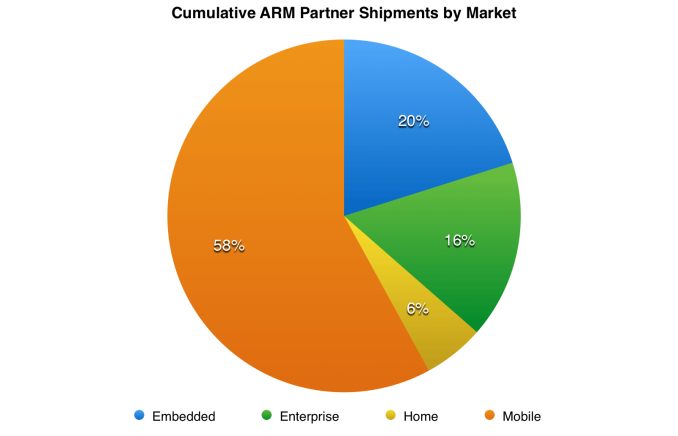 A few weeks ago ARM celebrated its partners shipping over 10 billion ARM based chips in 2013. As ARM makes a royalty on every IP license shipped, it was a banner year for the company. The bigger story was that the 10 billion in 2013 brought the cumulative total for ARM based processors to over 50 billion (note that these are discrete ICs, multiple cores within a single design are not counted multiple times). ARM's press activities were limited to talking about the big final number, but ARM has a pretty broad IP portfolio. What I wanted was a breakdown of where the 50 billion went, so I asked.

What I got in response were tables of data. I was asked not to share specific numbers, but using the data in graphs was ok - and that's all I wanted to do. We'll start with where the 50 billion went in terms of markets (pictured above). Mobile obviously took the majority of shipments, followed by embedded markets. Remember that ARM cores are used all over the place, including in things like HDD and SSD controllers. The modems that work alongside the main apps processors in mobile devices are also frequently home to ARM processor IP. Intel's Quark project actually came about because Intel needed a low power/low cost core to use internally for various projects and eventually decided to offer it to anyone who wanted it. For those companies that don't have the desire/ability to build and validate their own low power CPU core, they often turn to ARM.

The enterprise slice may be a bit misleading depending on what you define as enterprise. We often refer to enterprise in terms of primary CPU shipments into servers. In this case we're talking about chips that go into things like routers and wireless access points. ARM obviously hopes to take a big portion of the high dollar enterprise CPU market with its ARMv8 based IP in the coming years, but it's not there yet.

Note that 37.5 of the 50 billion chips shipped in the past five years (2009 - 2013). That shouldn't come as a surprise given the overlap between that time period and the rise of modern smartphones and tablets. 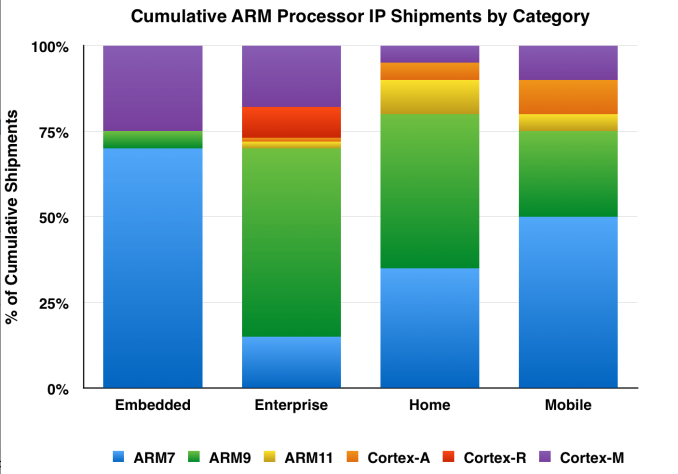 Two thirds of all ARM mobile shipments are really old ARM7 and ARM9 based designs (remember my point about modems above). Here we get the first hint that the reign of the ARM11 designs (the foundation of the original iPhone) was a small blip in the grand scheme of things - the Cortex A family is really what allowed mobile to grow.

The embedded market is dominated by these lower power cores, although the newer Cortex M designs have made a huge dent. The same is true for the enterprise market, which is indicative of what I said earlier about ARM's enterprise market not yet including primary CPU sockets. 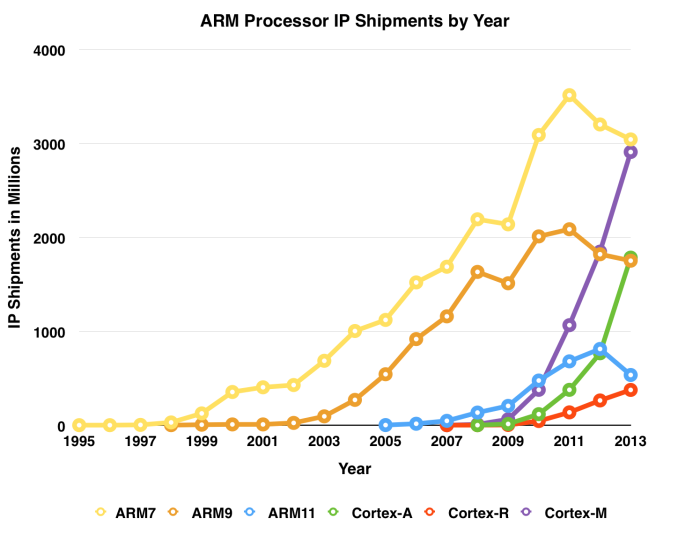 The trends are extremely telling. ARM7 (and ARM9) shipments peaked back in 2011 and have been in a slow decline ever since. Cortex M based designs have been skyrocketing since their introduction and show the most aggressive growth of any ARM line. The Cortex A line shows a similar slope over the past two years, with the ARM11 shipments crossing over in 2012.

The next two charts show the same data but focusing on the past 7 years and past 4 years, respectively: 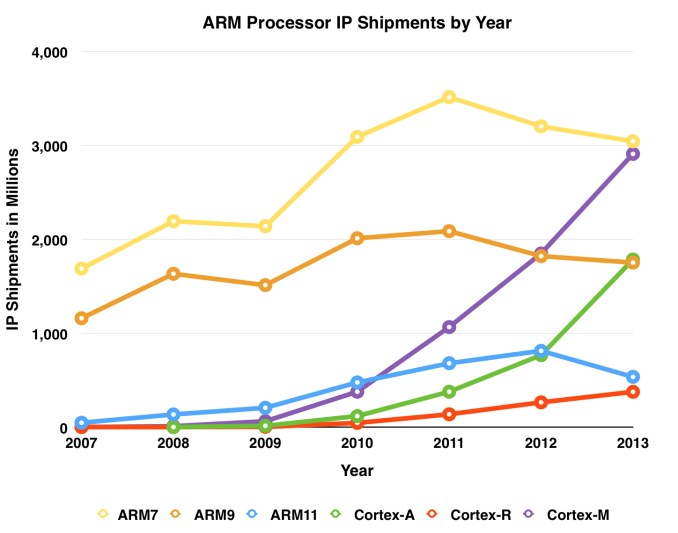 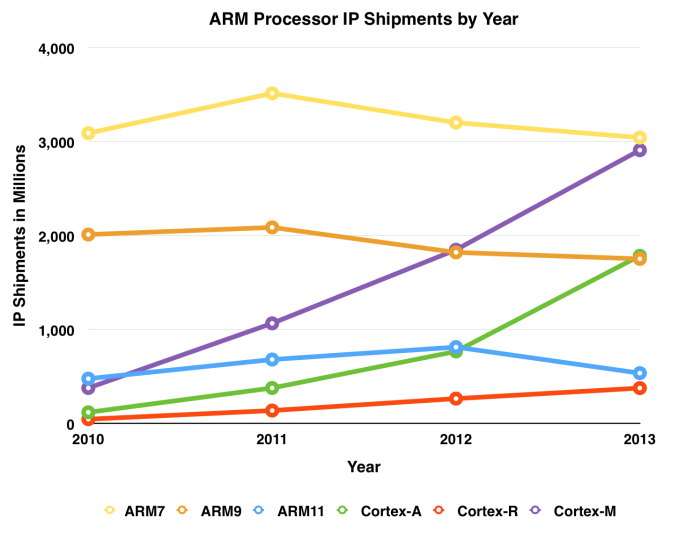 You can easily correlate the rise in ARM's shipments with the explosion in mobile. It's also interesting to point out that, for the most part, shipments are growing with higher performing product families. A smart man once told me that no one wins by betting against performance. Although ARM definitely has its fair share of area and power optimized designs, ultimately it's the serious focus on performance that's been responsible for the surge over the past few years.

It's worth pointing out that although the shipment numbers we're talking about here are in the billions, there's a point to be made about margin. ARM pointed out that Cortex-A shipments overtook x86 in 2012, but with most Cortex-A based designs shipping at well below $30 it's important to put volume in context.

There's a real opportunity for ARM and its partners to start pushing for even higher end designs in my opinion. Thus far all of the talk about ARM enterprise CPUs has been focused on effectively repurposing smartphone designs for the datacenter. You could argue that the Cortex A57 is more enterprise focused than mobile focused, but the fact remains that it's still small/low power enough to get into a phone. I believe one of the next opportunities for disruption will be if ARM (and/or its partners) build a truly big core, something aimed exclusively at the enterprise (and could be repurposed for notebook/desktop use). I've got to believe that all the big players in the ARM space are working on such a thing. And the implications of even moderate success of such a thing are pretty big (particularly if you look at the impact to server CPU ASPs).