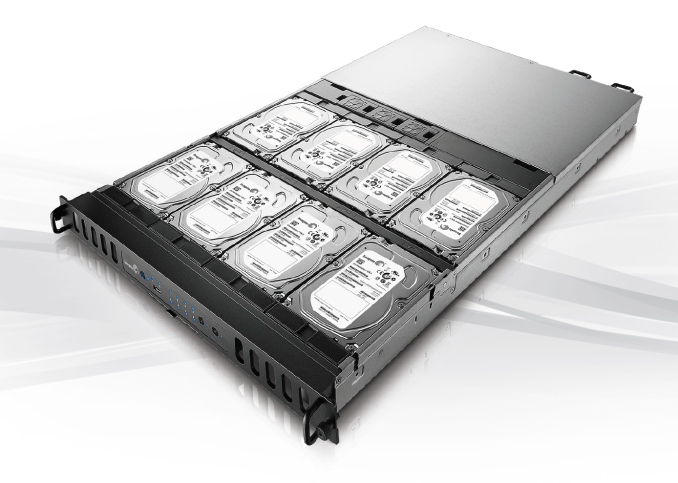 Seagate's acquisition of LaCie in 2012 made quite a bit of sense as most of their product lines were complementary in nature. However, they had a bit of an overlap in the NAS market, particularly in the SOHO ARM-based segment. Early last year, we reviewed the LaCie 5big NAS Pro, a desktop form factor x86 NAS with an embedded Linux OS developed in-house by LaCie. With Seagate not having a presence in this space, it was an ideal segment to target with the help of LaCie's expertise. The result of the attempt is the Business Storage 1U rackmount lineup.

The Seagate Business Storage 1U Rackmounts come in 4-bay and 8-bay varieties. The Business Storage lineup also includes 1-4 bay versions based on a Cavium chipset, but the OS running on those is not based on LaCie's NAS OS. There is also a 4-bay Windows Server. The Cavium-chipset based units as well as the Windows Server come in the desktop tower form factor, while the units based on LaCie's OS are all rackmounts.

The specifications of the Seagate Business Storage 8-Bay Rackmount unit being reviewed today are provided below.

After taking a brief look at our testbed setup and testing methodology for the unit below, we will move on to the hardware and setup impressions. Following that, we will cover performance in single client scenarios and our usual multi-client tests. The final section will cover rebuild times and power consumption numbers while also providing some closing thoughts.

Our NAS reviews use either SSDs or hard drives depending on the unit under test. While rackmounts and units equipped with 10GbE capabilities use SSDs, the others use hard drives. Despite being a rackmount, the STDP32000100 was evaluated with the bundled drives because of the vendor's market positioning. Evaluation of NAS performance under both single and multiple client scenarios was done using the SMB / SOHO NAS testbed we described earlier.