Last month I took a tour of Oak Ridge National Laboratory and visited the final stages of the assembly of the Titan supercomputer. Titan brings together 18,688 compute nodes, each complete with a 16-core AMD Opteron 6274 CPU and an NVIDIA Tesla K20X GPU. The total core count ends up at 299,008 AMD x86 CPU cores and 50,233,344 NVIDIA GPU cores. Each CPU gets 32GB of DDR3 while each GPU is paired with 6GB of GDDR5 for a total of 710TB of memory in Titan altogether. The entire machine will use as much as 9 megawatts of power under full load.

I described some of the types of applications that will run on Titan in our earlier article, but one of the first applications that Titan was tuned for was the LINPACK benchmark. The Top500 list of world's fastest supercomputers as measured by LINPACK is updated twice a year: in June and November. The Titan upgrade was completed just in time to tune and run LINPACK on the machine and submit an official score. As with any new system there's always the threat of hardware or software issues, but luckily the teams working on Titan were able to upgrade all 18,688 compute nodes and get this system stable and running in time to meet the November deadline for submissions. 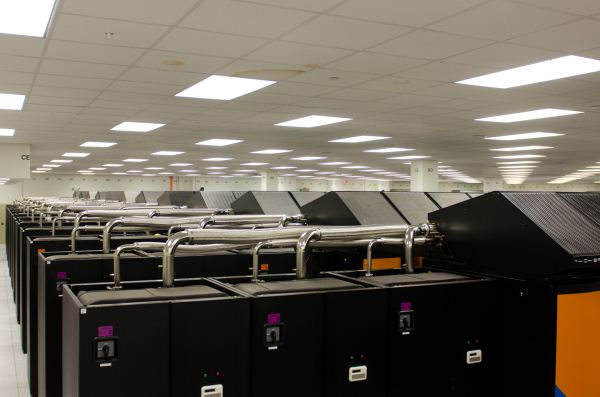 The result is very impressive, a score of 17.59 petaflops in the LINPACK benchmark while drawing 8.21MW of power. Titan's first LINPACK score gives it the first place position on the Top500 list of supercomputing sites. Number two on the list is IBM's BlueGene/Q system using PowerPC A2 CPUs and delivering 16.33 petaflops.