A Much Larger Battery

Apple claimed no decrease in battery life for the new iPad compared to last year's model and only a 1 hour drop over LTE. The problem is that the combination of A5X SoC under GPU load, the LTE baseband and driving/lighting all of those pixels in the Retina Display has a significant impact on power consumption.

Apple addressed the issue by increasing the new iPad's battery capacity by 70%. If the leaked PCB photos are accurate (they look to be), Apple increased battery volume by shrinking the motherboard size and increasing the thickness of the tablet.

The new 42.5Wh battery is downright huge. To put the new iPad's battery in perspective, this is nearly the same battery capacity as the what was shipping in the 2008 13-inch MacBook Pro. This is also a bigger battery than what's used in the 2011 11-inch MacBook Air: 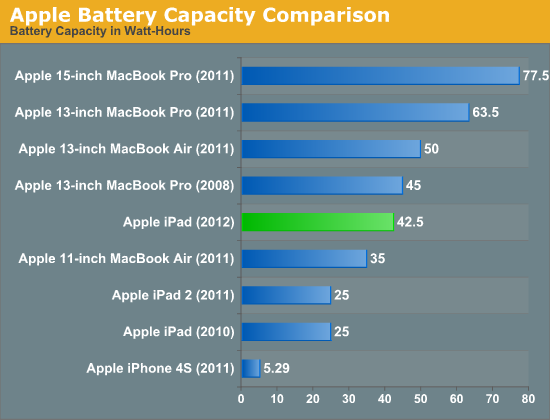 Over the next two years you can expect to see the line between ultraportable and tablet blur considerably. Looking at where the new iPad falls in the chart above really begins to exemplify just how blurry that line is going to become.

With the display off, the new iPad looks and feels a lot like the iPad 2. The additional thickness is hard to see, but the additional weight is definitely noticeable. The new iPad isn't as heavy as the original model, but it's clearly heavier than the iPad 2. I don't believe the added weight is a deal breaker, but it is a step backwards. Maintaining battery life however obviously trumps added weight.

The math is pretty simple. If Apple is claiming 10 hours of battery life with a 42.5Wh battery, the new iPad with the iPad 2's battery would likely be good for just under 6 hours. Such a drop would be unacceptable and thus the new iPad gets a bigger battery and incurs additional weight from the new battery and display components.