TI was one of the earliest partners with ARM on the Cortex A15 and silicon just came back from the fab at the beginning of this year. Even if Apple were similarly instrumental in the definition of the Cortex A15 architecture, it would be Q3 at the earliest before it could have working silicon available in volume. With no A15 design ready and presumably no desire to jump into the custom-designed ARM CPU market quite yet, Apple once again turned to the Cortex A9 for the A5X. 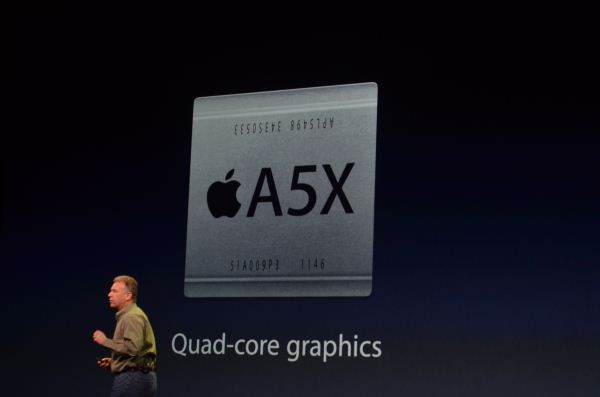 Apple confirmed that there are only two Cortex A9 cores on the A5X and it neglected to mention operating frequency. I suspect the lack of talk about CPU clocks indicates that they perhaps haven't changed. We could still be looking at a 1GHz max operating frequency.

Although we've speculated that Apple moved to a 32nm design with the A5X, it is entirely possible that we're still dealing with mature 45nm silicon here. It would explain the relatively conservative GPU clocks, although the additional GPU cores would balloon die size to 150 - 160mm^2 (roughly twice the size of Tegra 3). If A5X is 32nm, assuming a relatively conservative 80% scaling factor Apple would be able to maintain a die size of around 125mm^2, similar to the previous generation A5.

A quad-core CPU design does make some sense on a tablet, but only one that is either running heavily threaded workloads or is subjected to pretty intense multitasking. As we found in our iPhone 4S review, many iOS apps are still not very well threaded and have a difficult time utilizing two cores, much less four. On the multitasking front, Apple has enabled task switching but there's still no way to run two applications side-by-side. The most CPU intensive workloads on iOS still require that the app is active in the foreground for user interaction. Apps can work in the background but it's not all that constant/common, and again, they aren't pegging multiple cores. Apple built a very efficient, low overhead platform with iOS - it had to thanks to the hardware specs of the original iPhone. A result of iOS' low-overhead, very efficient design is expectedly low CPU utilization for most tasks. This is not to say that CPU performance isn't important under iOS, just that it's hard to find apps that regularly require more than a single core and definitely hard to find those that can benefit from more than two cores.

I will say though, Apple could easily add more cores if it wanted to spend the die area without a significant impact on power consumption. Remember that idle cores can be fully power gated, effectively reducing their power consumption while idle to zero. Apple could also assume a fairly conservative CPU governor and only wake up the third and fourth cores when absolutely necessary (similar to what we see happening with Tegra 3 on Android).

What about the Next iPhone?

Apple has traditionally used the iPad SoC in the subsequent iPhone release that followed later in the same year. It would make sense to assume that we'll see a smartphone version of the A5X SoC (at lower clocks) later this year. The A6? That'll probably debut next year with the 4th generation iPad.

Apple wouldn't let us run any third party applications on the new iPad so we couldn't confirm the actual memory capacity of the new model. On stage at the event, Epic mentioned that the new iPad has more memory and a higher output resolution than the Xbox 360 or PlayStation 3. The Xbox 360 has 512MB of memory, and Apple's A5/A5X has a dual-channel LPDDR2 memory controller. Each channel needs to be populated evenly in order to maintain peak bandwidth, which greatly narrows the options for memory capacity on the new iPad. 768MB would imply 512MB on one channel and 256MB on the other, delivering peak performance for apps and data in the first 512MB but lower performance for the upper 256MB. Given the low cost of DRAM these days, I think it's safe to assume that Apple simply went with two 512MB DRAM devices in a PoP configuration on the A5X for a total of 1GB of LPDDR2 memory in the new iPad. 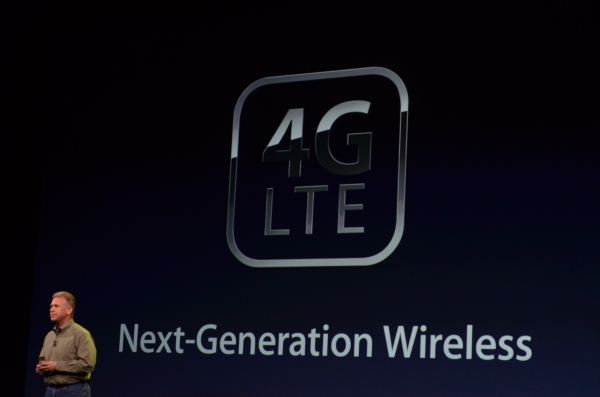 Brian did an excellent analysis on the LTE baseband in the new iPad here. Qualcomm's MDM9600, a 40nm design appears to be used by Apple instead of the 28nm MDM9615. In hindsight, speculating the use of a 28nm LTE baseband for the new iPad was likely short sighted. Apple had to be in the mass production phase for the new iPad somewhere in the January/February timeframe. Although 28nm silicon is shipping to customers today, that was likely too aggressive of a schedule to make it work for an early-March launch.

Apple offers carrier specific iPad 4G models on AT&T and Verizon, although both versions can roam on 3G networks around the world. Apparently the iPad 4G isn't SIM locked, so you'll be able to toss in a SIM from other carriers with compatible networks. LTE data plans are available from AT&T and Verizon with no long-term contract:

Apple surprised many by referring to the 3rd generation iPad simply as "the new iPad". The naming seems awkward today, but it's clearly a step towards what Apple does across many of its product lines. The MacBook Air, MacBook Pro and iPod all receive the same simple branding treatment; newer models are differentiated by a quietly spoken year or generation marker.

I still remember back several years ago when PC OEMs were intrigued by the idea of selling desktops based on model year and not on specs. Apple has effectively attained the holy grail here.