Microsoft has talked a bit about SkyDrive before in its plans for Windows 8, but Microsoft's Mike Torres and Omar Shahine have authored a Building Windows 8 blog post that have made the company's plans for it a bit clearer, and outline the degree to which SkyDrive support will be built in to the new operating system.

The Metro app, pictured above, has been built from scratch for Windows 8 and Windows on ARM and will eventually become the preferred method of working with SkyDrive data (though the service's web interface will still be available). Any Metro application in Windows 8 that can save or open files will be able to do so to and from SkyDrive manually and automatically without any extra coding on the part of third-party developers. 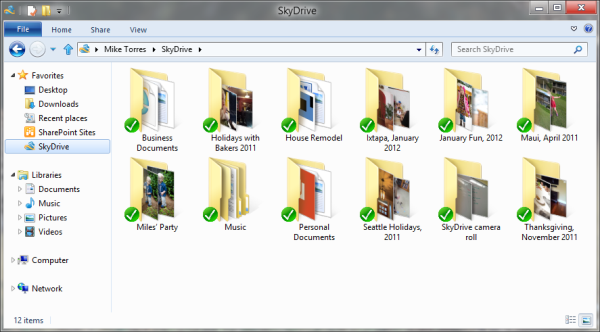 The SkyDrive desktop app is less tightly integrated with the OS - when downloaded and installed, it works more like Dropbox, keeping your SkyDrive files in one folder (which is stored locally for offline access) and synchronizing changes to the server as files are created, deleted, and updated - the interface (as pictured above) is very Dropbox-like, right down to the green checkmarks next to synced items. The SkyDrive client will be able to upload files as large as 2GB to your storage space, and the client will also be available to Windows Vista and Windows 7 clients when it' s launched - sorry, Windows XP users, but the writing has been on the wall for awhile, and Microsoft would very much like it if you would upgrade your operating system.

Microsoft's description of its cloud services - "a single drive that’s available across all of their devices, tailored to the experiences they’re using, providing instant, secure, and private access to their files" - mirrors to a large degree Apple's efforts with iCloud (though iCloud's storage is all used directly by applications via APIs, rather than actually allowing users to access a filesystem. iDisk offers more traditional online storage functionality for Macs, but its discontinuation is imminent) - think one part iCloud, one part Dropbox. Expect Microsoft's strategy for SkyDrive to become clearer as the Windows 8 launch date gets closer.

Early versions of the SkyDrive Metro and desktop apps will be made available with the Windows 8 Consumer Preview later this month. See the link below for additional details.