Qualcomm has historically been pretty silent about its GPU architectures. You'll notice that specific details of Adreno GPU execution resources have been absent from most of our SoC comparisons. Starting with MSM8960 however, this is starting to change.

The MSM8960 uses a current generation Adreno GPU with a couple of changes. Qualcomm calls this GPU the Adreno 225, a follow-on to Adreno 220. Subsequent Krait designs will use Adreno 3xx GPUs based on a brand new architecture.

As we discussed in our Samsung Galaxy S 2 review, Qualcomm's Adreno architecture is a tile based immediate mode renderer with early-z rejection. By Qualcomm's own admission, Adreno is somewhere in the middle of the rendering spectrum between IMRs and Imagination Technologies' TBDR architectures. One key difference is Adreno's tiling isn't as fine grained as IMG's. 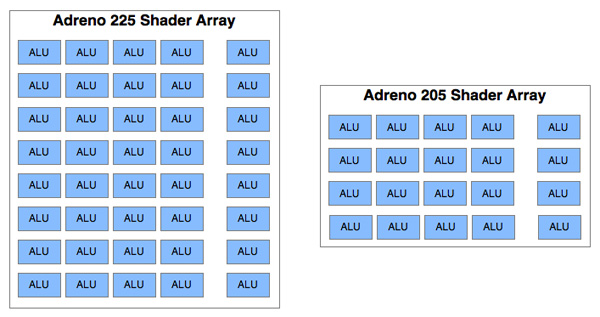 Update: Qualcomm has clarified the capabilities of its 4-wide Vector ALUs. Similar to the PowerVR SGX 543, each 4-wide vector ALU is capable of four MADs (one per component). The scalar units cannot be combined to do any MADs, although they are helpful we haven't really been tracking those in this table (IMG has something similar) so we've excluded them for now.

Looking at the table above you'll see that this is the same amount of computing power than even IMG's PowerVR SGX 543MP2. However as we've already seen in our tests, Adreno 220 isn't anywhere near as quick.

Shader compiler efficiency and data requirements to actually populate a Vec4+1 array are both unknowns, and I suspect both significantly gate overall Adreno performance. There's also the fact that the Adreno 22x family only has two TMUs compared to four in the 543MP2, limiting texturing performance. Combine that with the fact that most Adreno 220 GPUs have been designed into single-channel memory controller systems and you've got a recipe for tons of compute potential limited by other bottlenecks.

With Adreno 225 Qualcomm improves performance along two vectors, the first being clock speed. While Adreno 220 (used in the MSM8660) ran at 266MHz, Adreno 225 runs at 400MHz thanks to 28nm. Secondly, Qualcomm tells us Adreno 225 is accompanied by "significant driver improvements". Keeping in mind the sheer amount of compute potential of the Adreno 22x family, it only makes sense that driver improvements could unlock a lot of performance. Qualcomm expects the 225 to be 50% faster than the outgoing 220 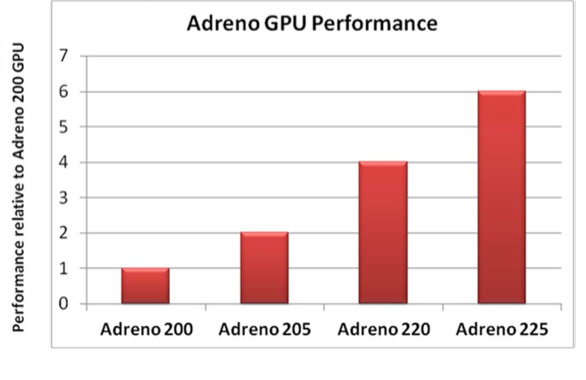 Qualcomm claims that MSM8960 will be able to outperform Apple's A5 in GLBenchmark 2.x at qHD resolutions. We'll have to wait until we have shipping devices in hand to really put that claim to the test, but if true it's good news for Krait as the A5 continues to be the high end benchmark for mobile GPU performance.

While Adreno 225 is only Direct3D feature level 9_3 compliant, Qualcomm insisted that when the time is right it will have a D3D11 capable GPU using its own IP - putting to rest rumors of Qualcomm looking to license a third party GPU in order to be competitive in Windows 8 designs. Although Qualcomm committed to delivering D3D11 support, it didn't commit to a timeframe.