Our first look at $190 P67 boards started with ASUS and Gigabyte. Within hours of posting the review, I was commandeered by several other companies to look at their $190 motherboards. This is still one of the best selling P67 price points, even with Z68 around the corner. Here, we look at the MSI P67A-GD65, the ASRock P67 Extreme6 and the ECS P67H2-A2, and come up with some interesting results.

P67 has received a lot of criticism since its inception. With all the Sandy Bridge CPUs containing an integrated GPU in the form of Intel’s HD graphics, we’d expect each chipset to have some form of graphical output. But for some reason, it wasn’t included in P67—this may be part of Intel’s divine strategy of separating different features in different chipsets, or that Z68, the successor to P67 which will include video outputs, just wasn’t ready. With the lack of access to the iGPU, we also lose access to QuickSync, and end up with silicon real-estate we can’t use. One other sticking point was that Cougar Point does not natively support USB 3.0, whereas it seems that AMD will for their next generation of chipsets.

We expect Z68 to command a premium, this much is certain. With the recent news regarding NVIDIA bringing Optimus to desktops, and we’ve known Virtu will also be available for a little while now, we can expect lower 2D power usage, as well as use of QuickSync. Both the CPU and iGPU can be overclocked, which will also mean that manufacturers will have to put more testing into CPU power delivery, leading to higher board cost. So where does this leave P67, exactly? A lower priced alternative to overclocker the CPU while using discrete GPUs?

Let’s not forget the Intel recall of all Cougar Point chipsets with the mild manufacturing issue. P67 is painted with the stigma of this issue, and the only way to ensure a B3 stepping of the PCH is to buy a board with B3 in the name, or from a reputable retailer that would have replaced all their stock. Z68 isn’t scarred with this issue, adding more credence to P67 potentially disappearing.

So here I am, ranting about P67 and Z68. Why should we review these P67 boards if they might disappear? The importance of future sales of P67 will depend exactly on the price premium over Z68. It could be argued that P67 is to be squeezed out of the market, and the rest of the P67 product will be sold with discounts, but it’s currently here, and people are still buying, wanting the best deal, and it may still stay with us for a long while yet.

With that in mind, today we’re looking at three P67 boards, all initially released around the $190 price point (though some have changed since). First is the MSI P67A-GD65 ($180) offering more bells and whistles than a county fair. Then the ASRock P67 Extreme6 ($210), which is the model above the P67 Extreme4, which we liked very much in terms of price/performance/add-ons—it will be interesting to see what has changed between the two models. Finally we test the ECS P67H2-A2 ($195), offering simplicity and functionality. Let the games begin! 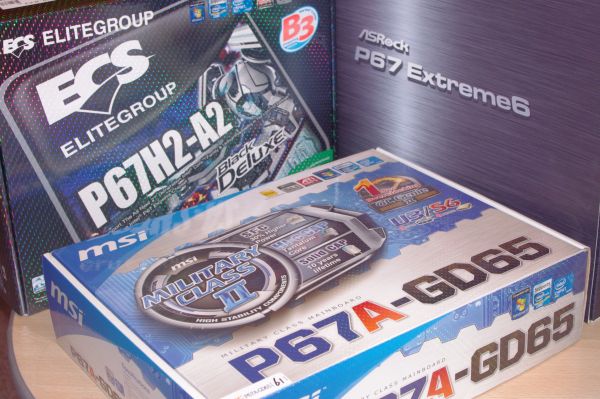