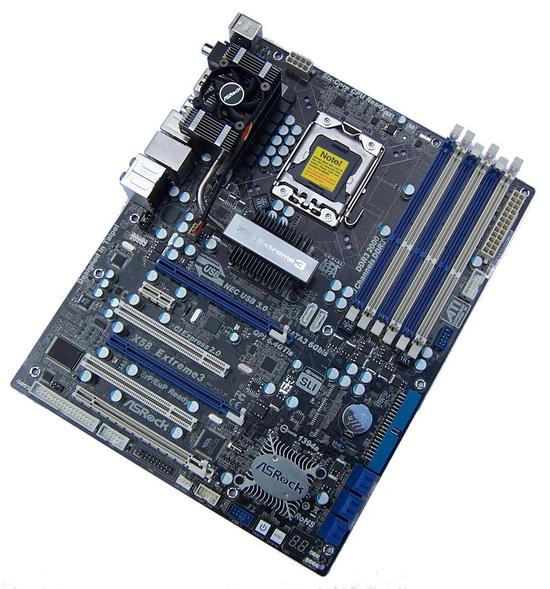 The ASRock X58 Extreme3 is available (at time of writing) for $189.99, one dollar above the EX58-UD3R.  For your extra dollar, a plethora of extra features over the Gigabyte board are available on the ASRock board - a full set of 6 DIMM slots for DDR3 memory, USB3 compatibility, SATA 6Gb/s connectivity, three PCIe slots (x16, x16, x4), Power/Clear CMOS/Reset buttons, and support for DDR3 ECC memory.  The main question is whether this board performs as well as the UD3R, given any of these extra features, or even above the ASRock Extreme, which is $20 cheaper.

What we want to see in a budget board is finesse and capability - a BIOS that works, compatibility with components, and something that runs happily above stock.  While the best budget boards undoubtedly won't have all the bells and whistles of a premium enthusiast board, if it runs decent and we can play around without too many issues, and the price is right, then it will sell.  Off the bat, the ASRock Extreme3 is a happy little runner, with a few issues.  We've had this board running for a couple of weeks now, with an overclock, in a variety of situations, and it's a board worth considering if USB3 and SATA6Gb/s are two features you're dying to have with a Socket 1366 processor on a budget.

In this review, We’re pitting the Extreme3 against the board that has been the stalwart of my PC cavalcade - the Gigabyte EX58-UD3R, revision 1.0.  The EX58-UD3R appeared on the market in Q4 2008, and is still one of the best budget X58 boards available in terms of capability and performance.  ASRock have known their competition for over a year, so they have to show that their product can provide a distinct improvement over the competition.  The marketed additions of USB3 and SATA 6Gb/s is a start, but ASRock is having trouble applying BIOS polish to the motherboard, which we will explain later.

People in the market for just such a board are interested in getting the most out of a Core i7 920 or i7 930 for as little cost as possible, to spend on other areas, such as graphics, memory, or a speedy SSD.  So using a high end air cooler/low end water cooler, 3-6GB of memory, two mid-range DX11 GPUs in SLI/CFX, a small boot SSD and storage HDD would make a pretty neat enthusiast system on a relatively tight budget.  So it would be nice to know if you've got a motherboard up to the task.

Our board arrived pre-flashed with the public v1.2 BIOS.  On the first boot, after changing the processor voltage options, would not allow the changing of other voltage settings, such as ICH, IOH CSI and CPU PLL.  These were changeable after a subsequent boot, however.  Users who frequent BIOS options will be frustrated at ASRock's effort - some sections of the BIOS allow numbers to be typed in (such as BCLK), but others require using the +/- keys.  Some options, on pressing enter, open out into a submenu whereby you can select the setting you want - however, most do not.  This early BIOS version also gave trouble by refusing to wake out of C3 unless the C State Package Limit setting was moved from Auto to C3 - this is to some extent still an issue on the v1.6 BIOS (latest at time of writing).

Other than the fiddly BIOS options that could do with a little polish, the ASRock X58 Extreme3 is very well placed in terms of cost and performance in the X58 market.