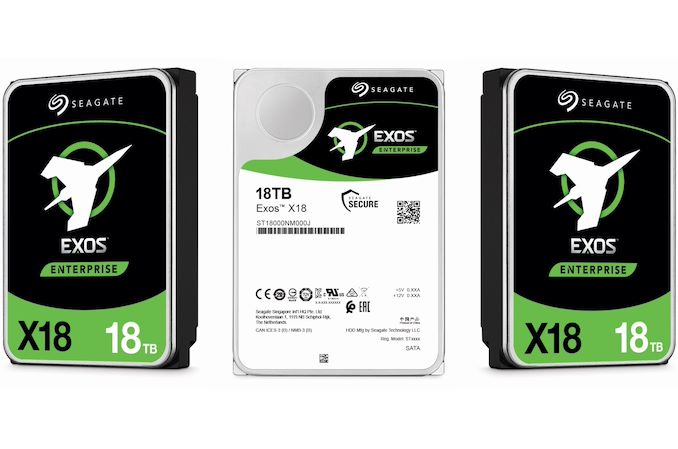 Seagate recently introduced their 18TB flagship IronWolf Pro hard drive for SMB/SME NAS units. Today, the company is unveiling the Exos enterprise version of the same drive. The Exos X18 goes head-to-head against the Western Digital WD Gold 18TB EAMR-based drives introduced in July. Seagate is also taking the opportunity to expand their application/storage server lineup with a 2U 12-bay model - the Exos AP 2U12 Compute and Storage System.

The Seagate Exos X18, like the IronWolf Pro 18TB, is a 7200 RPM CMR (conventional magnetic recording) drive with a 256MB multi-segmented cache. It contains additional reliability features, and firmware tweaks to provide features geared towards data centers and enterprise storage arrays. These include caching tweaks to optimize the drive for low-latency large data transfers, and a power balance feature that allows customization of the power consumption for the best possible watts/TB given a particular set of workloads. The MTBF increases from 1.2M in the IronWolf Pro to 2.5M hours for the Exos X18. 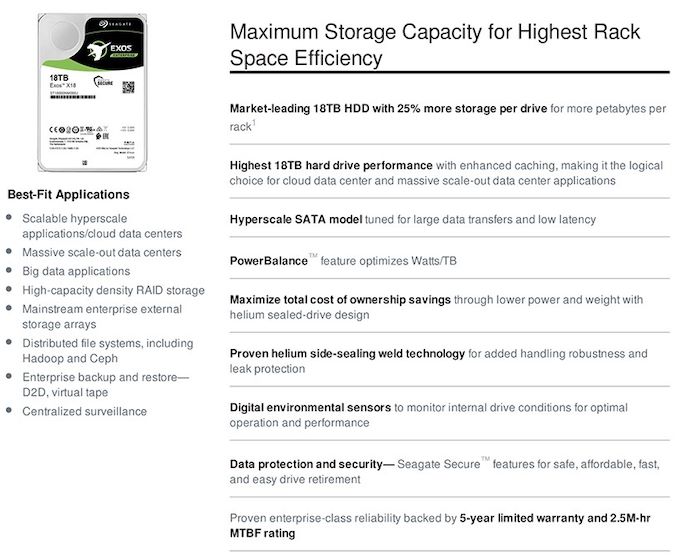 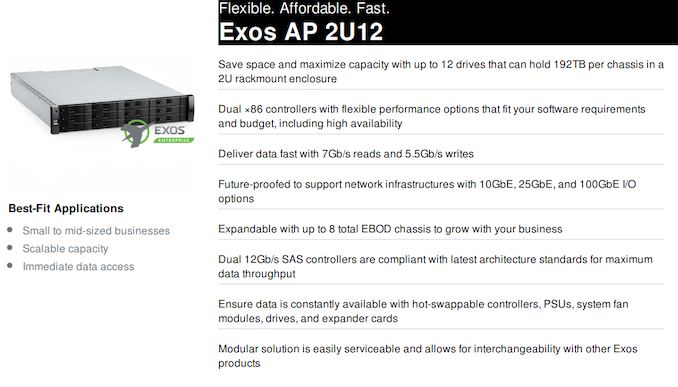 Seagate also has a lineup of products under the Exos Systems tag - these include multi-bay rackmount storage enclosures falling under three different categories - the AP series for compute and storage with an in-built x86 server CPU, the X series RAID enclosures, and the E series JBOD enclosures. Today, the company is introducing a 2U12 AP model - as the name suggests, the 2U rackmount server supports up to 12 3.5" drives and comes with two 10GBASE-T ports and two gigabit ports. The server board is based on the Xeon v5 v4 family, and CPUs with TDP of up to 85W are supported.

Coming back to the Exos X18, Seagate offers it in both SATA and SAS versions. The SATA version has a MSRP of $562, undercutting the WD Gold by $30.