Western Digital to Demo Dual-Actuator HDDs Next Week: Double the Actuators for Double the Perf 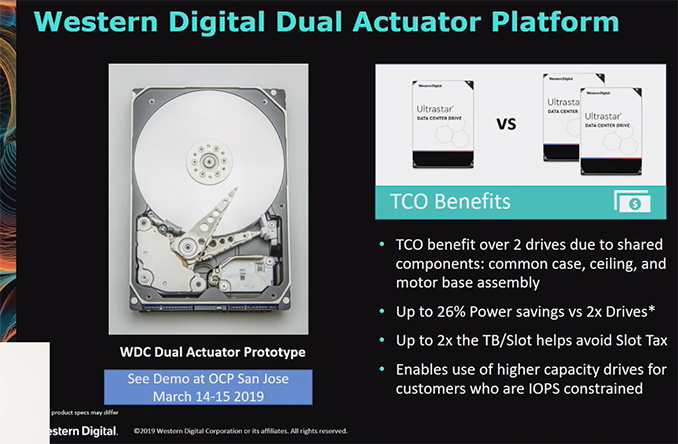 Western Digital has revealed this week that it will demonstrate its first dual-actuator hard drives at next week's OCP summit. Marking the company's first foray into multi-actuator drives, WD expects their dual-actuator HDDs to offer roughly twice the performance of conventional, single-actuator drives, although they'll be trading off some power efficiency in the process.

While the capacities of enterprise and nearline 7200-RPM hard drives has been increasing consistently, due to the laws of physics the I/O performance of these drives has remained at around 80 IOPS per drive. This means that because capacity has gone up, the drives' IOPS per TB performance ratio is decreasing, something that is especially problematic when it comes to read IOPS. As a result, it is getting harder for datacenter operators to meet their service level agreements and quality-of-service requirements.

To combat this, one of the most straightforward ways to increase drive performance and throughput is to increase the number of individual actuators, allowing drives to essentially service twice as many I/O operations at once. Both Seagate and Western Digital have been developing their multi-actuator HDDs for quite a while. The former demonstrated a working dual-actuator drive last March, whereas the latter will show off its dual-actuator prototype next week.

Western Digital has rather high expectations for its dual-actuator HDDs. The company expects the new drives to offer double the sustained transfer rates as well as double the IOPS when compared to existing HDDs. Which if we use existing drives as a baseline, would mean that we're talking about data rates on the order of 500 MB/s as well as 160 ~ 200 IOPS. Meanwhile, although no official numbers were provided ahead of next week's formal reveal, the company did publish a photo of its dual-actuator prototype. 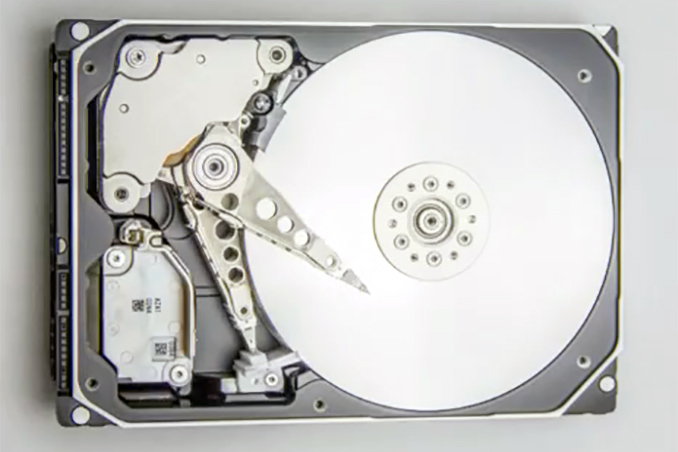 The trade-off for dual-actuator technology is that since these hard drives are essentially two HDDs in a single chassis, they will consume more power than traditional drives. But it's still 26% less than two independent HDDs, owing to the fact that it's still a single set of spinning platters. For example, Western Digital’s Ultrastar 14 TB SATA hard drive consumes 7.6 W in operating mode, and a pair of such HDDs would be 15.2W. Meanwhile, a hypothetical dual-actuator hard drive that consumes 26% less than these two would end up at around 11.25W, which, importantly, is within power limits of a typical 3.5-inch SATA bay (typically up to 12 W).

Right now, Western Digital is not disclosing when it intends to commercially release its dual-actuator HDDs. Instead, the company is stressing right now that it is only talking about a technology demo. Nonetheless, we hope the company will make its plans a bit more clear next week.