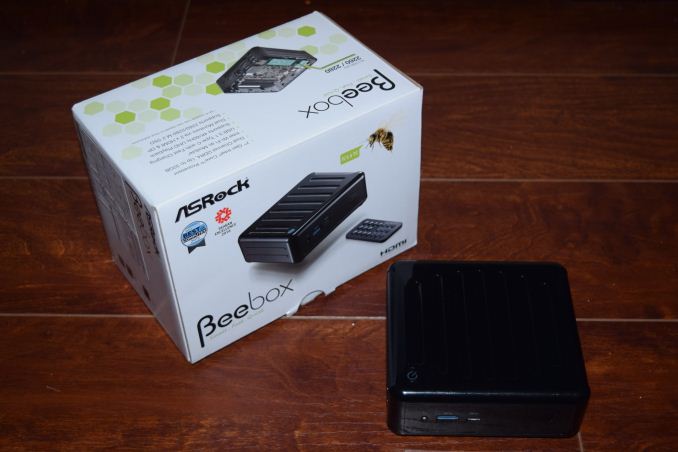 The Kaby Lake-U (KBL-U) series with 15W TDP CPUs was introduced along with the 4.5W Kaby Lake-Y ones in Q3 2016. The first set of products with Kaby Lake-U were ultrabooks. However, ultra-compact form-factor (UCFF) PCs were not long behind. There are already three vendors in the market with Kaby Lake UCFF PCs - ASRock (Beebox-S), GIGABYTE (BRIX), and MSI (Cubi 2). We have already reviewed the MSI Cubi 2 - a no-frills Kaby Lake 'NUC' The most important differentiating features of the ASRock Beebox-S 7200U include a USB 3.1 Gen 2 bridge, as well as a LSPCon (for HDMI 2.0 / HDCP 2.2 support) on the motherboard. This review takes a look at how the ASRock Beebox-S 7200U fares in typical UCFF PC workloads.

Ultra-compact form factor (UCFF) PCs have become quite popular after Intel introduced the NUCs. They have become powerful enough to be the primary computing platform for many households. In addition to the Intel NUCs, many system vendors have come up with their own approach to UCFF PCs. These include ASRock (with the Beebox series), ECS (LIVA), GIGABYTE (BRIX), and MSI (Cubi) amongst others.

Kaby Lake-U, as per Intel's claims, is fabricated on a much more mature 14nm process and brings about a 11% improvement in performance for the same power consumption. The GPU's media engine has also been updated. On the whole, the performance improvements look good for UCFF PCs - particularly for those upgrading from the first or second-generation systems.

We have reviewed multiple Beebox systems before (Cherry Trail, Skylake), and, from an industrial design viewpoint, the Beebox-S 7200U Kaby Lake version is no different. The dimensions are one of the smallest to allow the installation of a 2.5" drive. Unlike the MSI Cubi 2, the Beebox-S 7200U supports a M.2 2280 SSD (with the help of a M.2 riser - the same as the one used in the Skylake Beebox-S 6200U).

The Kaby Lake Beebox series is currently made of two SKUs, one based on the Core i3-7100U and another based on the Core i5-7200U. Both of these come barebones (no storage, memory, or OS). ASRock sampled us the version with the Core i5-7200U. The Beebox-S 7200U can take up to two DDR4 SO-DIMMs (operating at 2133 MHz). We completed the hardware build to result in the following specifications for our Beebox-S 7200U review configuration. Note that we processed most of our benchmarks with the NVMe drive, but a few testing routines used the SATA SSD (the relevant sections will go into the details).

Buy ASRock Beebox-S 7200U on Amazon.com

The ASRock Beebox-S 7200U kit doesn't come with any pre-installed OS, but does come with a CD containing Windows drivers. In any case, we ended up installing the latest drivers downloaded off ASRock's product support page. In addition to the main unit, the other components of the package include a 65 W (19V @ 3.42A) adapter with a US power connector, a VESA mount (along with the necessary screws), a driver CD, user's manual and a quick-start guide. In addition, we also have the appropriate cables - both data and power - to install a 2.5" drive in the system. A small IR remote control with a pre-installed CR232 battery (not shown in the picture below) is also part of the package. 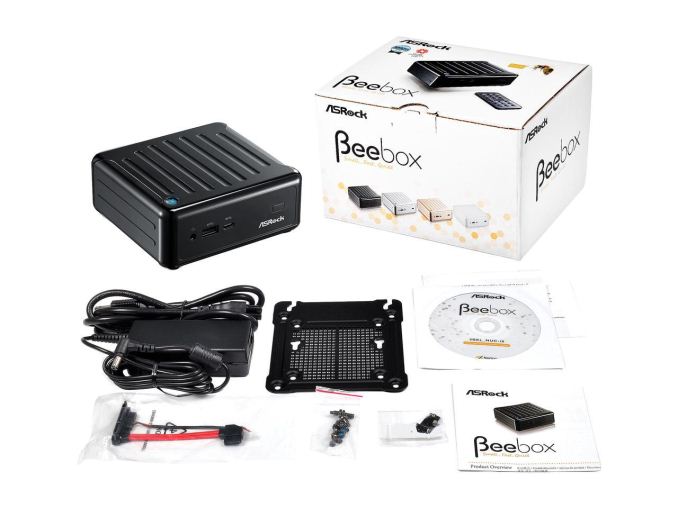 The unique part of the package is a small plastic tab and an additional screw that allows for installation of a M.2 2280 SSD in the unit. Note that even though Kaby Lake-U can theoretically support up to three simultaneous displays, the Beebox-S 7200U supports only two at a time (either HDMI 2.0 + HDMI 1.4 or HDMI 2.0 + DP). Other components that reside on the underside of the motherboard include the ASMedia ASM1142 USB 3.1 bridge chip and the MegaChips LSPCon to enable the HDMI 2.0 output from the DisplayPort output of the Kaby Lake-U SiP. The most important update from the Skylake Beebox is the additional HDCP 2.2 capability and DRM capabilities enabled by the Kaby Lake-U processor.

The PCIe lanes from the SiP are distributed as follow:

ASRock's BIOS has plenty of features that are missing in the BIOS from other vendors. I will not go into the details of all the BIOS features, but, readers interested in checking out the available options can peruse the user manual available here.

Compared to the MSI Cubi 2 with Kaby Lake, we find the Realtek GbE adapter replaced by the Intel I-219V. The Wi-Fi adapter is the Intel AC3160 compared to the AC3168. Compared to the barebones Core i5 version of the Cubi 2 (Cubi2-006BUS) at $375, the Beebox-S 7200U with the same processor is cheaper at $350 and also comes with better capabilities.

In the table below, we have an overview of the various systems that we are comparing the ASRock Beebox-S 7200U against. Note that they may not belong to the same market segment. The relevant configuration details of the machines are provided so that readers have an understanding of why some benchmark numbers are skewed for or against the ASRock Beebox-S 7200U when we come to those sections.