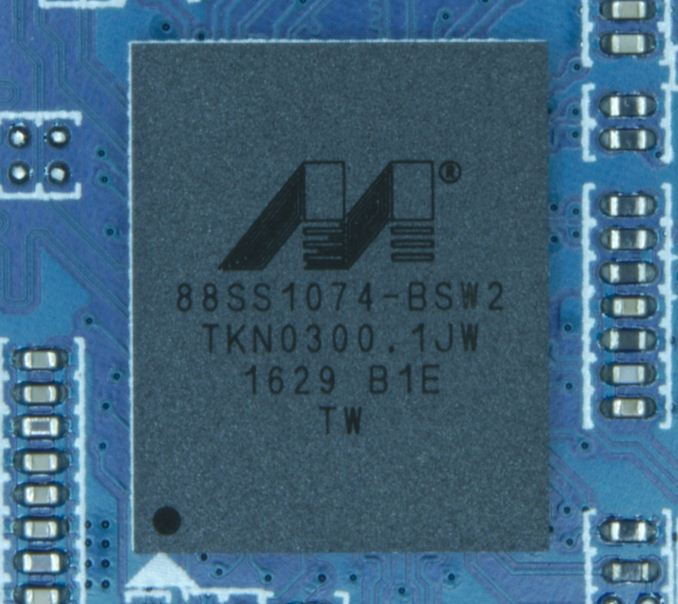 At CES, Marvell announced an updated version of its popular 88SS1074 SATA SSD controller in the 88SS1079. There's no significant change to performance or features as far as we are told, but it moves a few components that were required on the PCB side onto the controller die, saving cost and perhaps to a small extent, power. Fewer components on the PCB will also make layout a bit easier for an M.2 SSD, but the space saved is not so large as to allow for an extra NAND package, We've seen the 88SS1074 on popular SSDs such as the Crucial MX300, SanDisk X400 and WD Blue, and we expect the successors to these drives to adopt the 88SS1079. Some SSD vendors may update their products relatively soon to cut costs as soon as possible and to offset the price impact of the ongoing NAND shortage, but at the very least all current users of the '1074 controller can be expected to use the '1079 when moving to the next generation of 3D NAND that will be hitting the market later this year. This is still a play for cents per GB, so a few cents off the cost of the controller will be helpful, especially for the mid-range SATA SSDs that aim to offer a significant performance boost over DRAM-less designs for a small extra cost.

While we saw a solution using the controller in our meeting with Marvell at CES, we were told to wait for partners to announce their solutions before taking pictures. When we get the 88SS1079 drives in to test, it will be interesting to see if any performance change has occurred (remember, Marvell stated that this should perform the same) or if any power difference to the 88SS1074 is observed due to moving components on die. While no retail SSDs with the new controller have been announced and Marvell cannot comment on their customers' roadmaps, it shouldn't take long for manufacturers to integrate the new controller into their designs given the slight hardware changes and the ability to use existing firmware as-is. We expect new products using the 88SS1079 controller to be announced by the middle of this year.