Razer, a company that styles itself as 'by gamers, for gamers', has today unveiled its latest product, a modular NUC dubbed the Tomahawk. Available as both a barebones package and a high-tier gaming solution, the Razer Tomahawk looks to offer a 'cutting edge' mixture of functionality, performance, and graphics card compatibility, all within a NUC inspired chassis. Some of the key specifications include an Intel 9th generation Core i9 processor, with a 512 GB PCIe 3.0 x4 SSD, 2 TB of HDD storage, 16 GB of DDR4-2667 memory, and an optional RTX 3080.

The term NUC (Next Unit of Computing) gets thrown around a lot when it comes to super small form factor desktop computers, even when NUC is technically an Intel term. Going all the way back to 2014, when Razer's CEO unveiled a conceptual design for a modular PC dubbed 'Project Christine,' Intel looked to have taken the idea a step forward with what it called Element. We've seen many Intel NUCs hit the market this year, including the NUC 9 Extreme (NUC9i9QNX), which we reviewed back in April. Razer being Razer has gone one step further on this idea and created its own version of the NUC, with the Razer Tomahawk.

What sets the Razer Tomahawk apart from other NUCs on the market is its full-scale capability to install a full-sized graphics card with a maximum length of up to 320 mm, with a maximum height of 140 mm. This moves away from common small form factor systems, which generally have to opt for smaller alternatives such as the NVIDIA GTX 1650. The Razer Tomahawk features a tool-less sled that allows users access to the system, which could be to upgrade the storage or even install a new graphics card.

While this is a 'modular' system, it is essentially a PCIe backplane with two PCIe slots. In one slot goes the graphics card, and in the other is 'the rest of the PC'. That rest of the PC includes a 45 W overclockable mobile processor (unupgradable), memory (upgradeable), and storage (upgradeable). Despite there being a barebones option, Razer pre-populates all models with a 512 GB NVMe SSD, a 2 TB HDD, and 16 GB of DDR4-2667 (Razer doesn't say if this is 1x16 or 2x8). On both models there is a spare M.2 NVMe slot, and the barebones simply lacks the discrete GPU, but the integrated GPU can be used if there is not a discrete GPU present.

It wouldn't be a Razer product if it didn't have RGB LEDs. It includes an illuminated green Razer logo on the front panel, with addressable RGB LEDs on the underneath of the chassis to provide a bit of flair. Focusing on the size, the Tomahawk chassis is 19.23 x 24.15 x 1.60 inches (HxWxD), so it is svelte, and it also weighs in at 16.2 lbs. In terms of volume, the chassis itself is 10 L, which is big enough to fit all of the components in when designed efficiently.

Given the nature of the hardware installed, Razer has opted to cool the processor actively and includes two top-mounted 120 mm chassis fans, with ventilation on both side panels and the top panel. Powering the Tomahawk is a preinstalled 750W SFX power supply, although Razer hasn't specified the exact model. 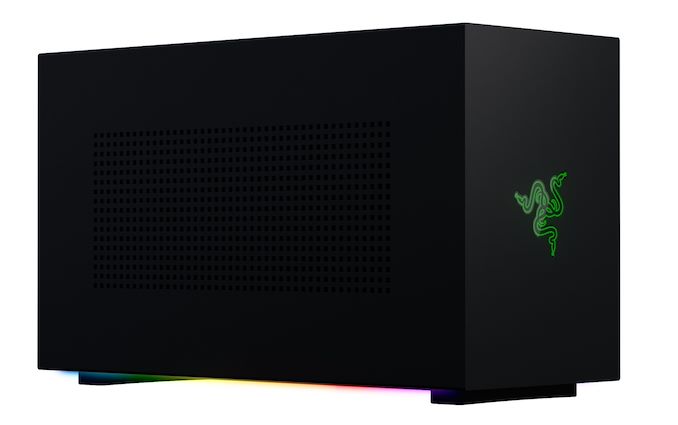 In terms of connectivity, the Tomahawk includes four USB 3.2 G2 Type-A ports, with two Thunderbolt 3 USB Type-C ports, and a single HDMI 2.0a video output. Users opting for the full package, including an NVIDIA RTX 3080 Founders Edition graphics card, adds three DisplayPort 1.4b and a single HDMI 2.1 video output. Networking includes two Gigabit Ethernet ports driven by unspecified controllers, while there's also an Intel AX200 Wi-Fi 6 interface, which includes support for BT 5.0 devices. Nestled in between the motherboard and graphics, I/O is a single 3.5mm audio jack that can accommodate speakers or act as a TOSLINK combo port.

A few possible use case scenarios for those with bottomless pockets or shallow desks could find this an ideal system to take to LAN, to and from work, or even for an on the go content creator. While Razer did unveil its own chassis called the Tomahawk Elite back at CES 2019, the Tomahawk Gaming System is a higher-grade and RGB infused version of Intel's NUC 9 Extreme. 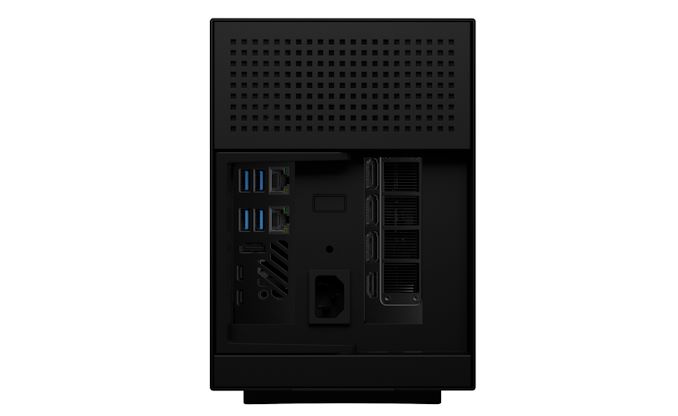 As previously mentioned, the Razer Tomahawk gaming desktop will be available as barebones without a graphics card for a base price of $2400, while the full model equipped with an RTX 3080 Founders Edition will cost $3200. It's not a cheap outlay, especially for an Intel system featuring an RTX 3080, but the latter hasn't been easy to source of late.