With Windows Phone 8.1, all three of the major smartphone platforms now have some form of a unified notification hub, all accessed by pulling a shade down from the top of the screen. Microsoft’s attempt is called Action Center, and like most aspects of Windows Phone it occupies a middle ground between Android and iOS.

Microsoft’s Action Center gives you direct access to four different shortcuts, the settings menu, and notifications from your apps. All aspects of Action Center are user definable. You can control what shortcuts appear at the top of the shade and you can choose what apps get to display their notifications.

The user customizable launch shortcuts are awesome, although I would like to have one or two more shortcuts to avoid scrolling through the mess that is the Windows Phone settings page.

There’s a clear all button in Action Center that not only wipes the screen clean of all notifications, but also propagates the clearing effect down to live tiles as well. In the screenshot below you see I have two emails in my AnandTech account and nine in my Gmail account:

Clearing all notifications in Action Center clears the unread email counter on both live tiles. 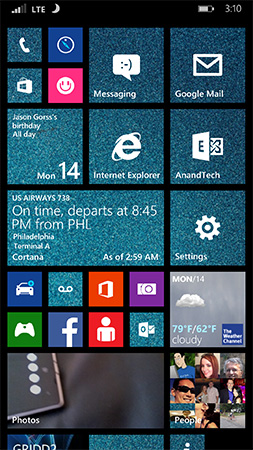 Pulling down on the Action Center also reveals a little more information in the Windows Phone status bar. You now get a battery percentage indicator, today’s date and the name of the cellular network you’re connected to. The status bar no longer automatically hides itself either. WiFi and cellular signal strength, notification (if applicable) and battery indicators are all permanently on display.

Apple has Siri, Google has Google Now, and Microsoft has Cortana. Pulled straight out of the Halo universe, Cortana ends up being a mix of Siri and Google Now. Cortana launches in beta with the same sort of basic voice assistance you get with Siri in iOS. Hitting the search button will take you to Cortana, while holding it down automatically puts her in listening mode. You can set reminders (including those based on location), create/move calendar events, ask about nearby shops/restaurants, place calls and dictate text messages.

Anything that doesn’t fall into a category that guarantees a verbal response from Cortana triggers a Bing search. By default all Bing searches are aimed at the web but by swiping to the right you can redirect search towards your device itself. Phone search is universal and it’ll index everything from apps to text messages and emails. Cortana features integrated music recognition as well. Just tap the music icon and within a few seconds, if the track exists in the Xbox Music store it'll be identified.

Cortana’s basics work well thanks to Microsoft’s extremely accurate (and speedy) voice recognition. You don’t have to use voice to interact with Cortana, typing is supported as well.

Cortana can prevent incoming notifications from surfacing while you sleep or are in a meeting using a feature called quiet hours. Similar to iOS6’s Do Not Disturb mode, Quiet Hours can be configured to allow certain contacts to break through. In an expansion over what iOS DND can do, Cortana can also instruct contacts who aren’t a part of your “inner circle” to text with a certain passphrase in order to break through quiet hours. Similarly, if any contact calls twice within a 3 minute period they’ll be exempted from quiet hours as well.

Unfortunately Cortana’s usefulness, much like Siri’s, can be quite limited. She’s great for settling alarms and creating meetings, but deeper natural language conversations just can’t happen yet. Cortana can save you from typing something, but that’s about the extent of her usefulness as a voice interaction tool.

This is where Cortana’s notebook comes in handy. If you allow her to, Cortana will look at your emails and monitor your behavior to determine what information she should float up to your attention. The result is a Google Now like experience, where you get things like reminders of upcoming flights based on emails in your inbox, as well as estimated commute time based on where Cortana thinks you live and work. You can give Cortana hints about your interests and she’ll use Bing news to grab headlines you might want to read. I feel like this is ultimately where these virtual digital assistants will end up, but we’re still at a very early stage in their evolution.

It’s interesting to note that Apple is now the only major smartphone player without a notebook/Google Now-like feature on its mobile platform. It’s no coincidence that the two players that do have that feature also derive revenue from selling advertising against user data. Once features like Cortana and Google Now get good enough, the obvious next step is to send highly targeted advertisements to the end user. It’s not necessarily a bad thing, but it’s clear that’s going to be the next major jump in advertising on mobile.