The HTC One: A Remarkable Device, Anand’s mini Review

If the One’s industrial design and materials choices make it nice to own, it’s the camera that makes the One a must have. In fact, that’s how it all started for me. I popped my test sim into the One and started carrying it around with my iPhone 5 as I went about the user experience part of my review process. I quickly found myself only taking photos using the One, and using the 5 for everything else. After a few days, the 5 was pretty much only used to check iMessages and answer calls to that number - with the One being used for everything else.

I remember talking to Brian after he first learned about what HTC decided to do with the One’s camera system. I believe he said something like “this is exactly what they should be building”. In the three years I’ve worked with Brian I don’t think I’ve ever heard him say that about any smartphone OEM’s decision with any component/subsystem. The strong endorsement was enough to pique my interest in the One. 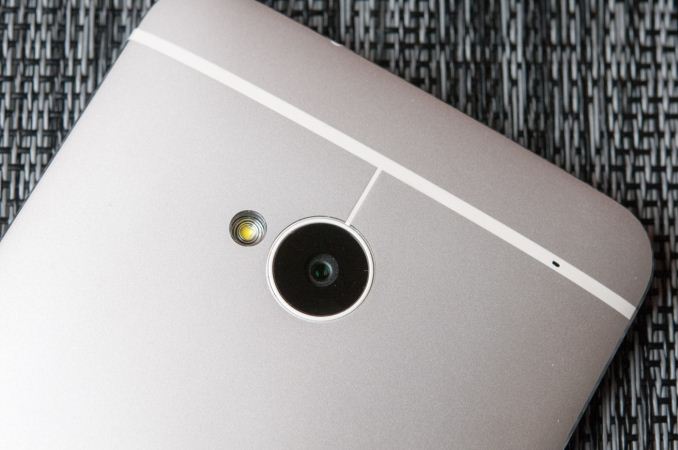 Brian will go into great detail about the One’s camera in his review, and what I’ll provide here is no where near doing it justice but I’ll do my best.

At a high level, HTC’s strategy with the One is to boldly bow out of the megapixel race and instead integrate a lower resolution rear facing camera sensor with larger pixels. Each pixel in the One’s 4MP rear facing camera sensor is over 2x larger than those in the iPhone 5, and even larger than those in the Galaxy S 4. Larger pixels help ensure a better signal to noise ratio, which in turn can really improve low light performance when paired with a suitable lens.

The downsides are obvious. Very well lit scenarios can suffer compared to a higher resolution sensor, and the bigger issue for HTC is that 4MP doesn’t sound as good to the uninformed consumer compared to the Galaxy S 4’s 13MP rear camera. HTC tried to get around the latter problem by calling its larger pixels Ultrapixels, but then it’s up to point of sale training to ensure that the benefits are adequately conveyed. Call me cynical but I don’t have a bunch of faith there.

The F2.0 lens ensures a bunch of light can hit the sensor, and the result is easily the best low light performance I’ve ever seen in any Android or iOS smartphone. I took this shot during Jen-Hsun’s GTC 2013 keynote earlier this week: 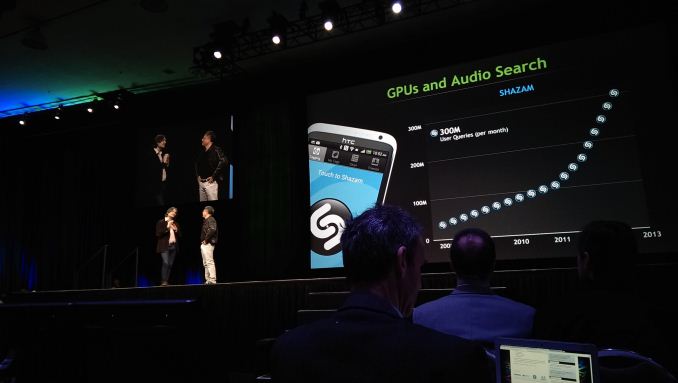 The One seems to want to drive ISO as high as possible to increase brightness, so for this particular shot I manually set ISO down to 100, but otherwise everything else was left to defaults.

The Auto ISO algorithm doesn’t always drive itself super high however, the shot below is outside of Terminal 2 at the RDU airport at 11:29PM: 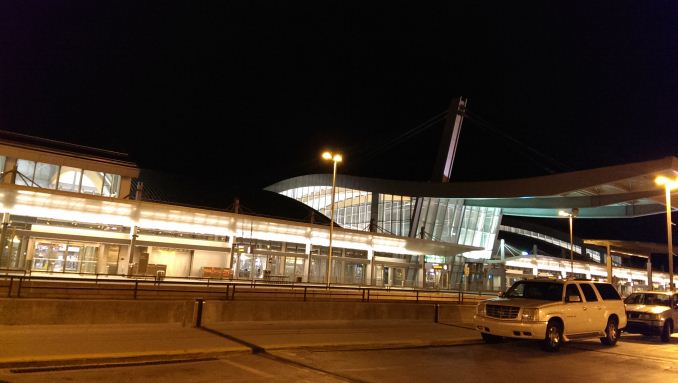 For this shot I didn’t touch anything and the result was a surprisingly low-noise shot.

It’s not just night shots where the One’s camera excels, but also in the more common poorly lit indoor scenarios where I come away very impressed: 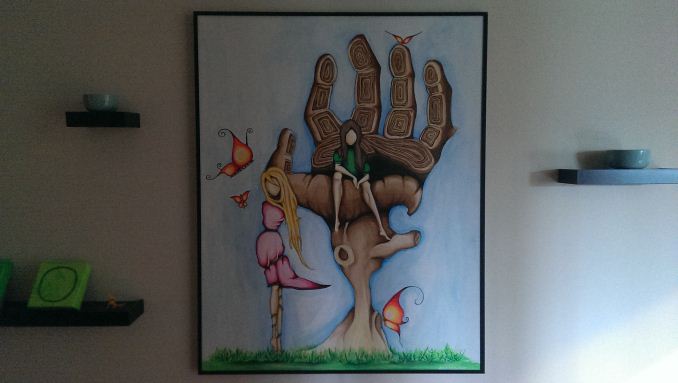 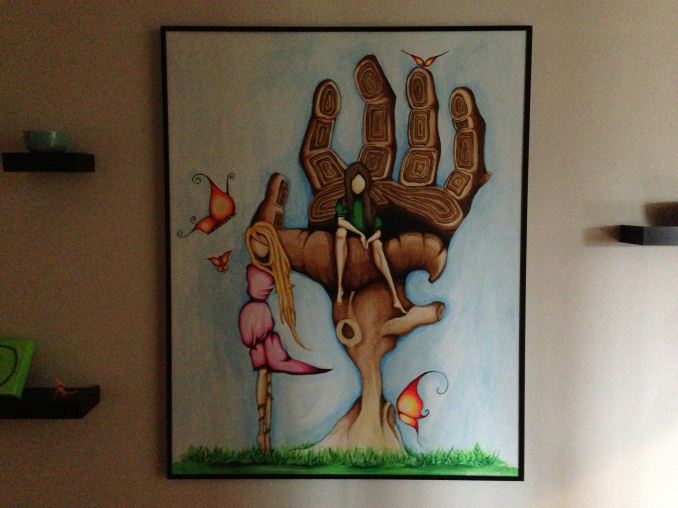 In well lit outdoor scenes the One’s camera does a reasonable job (although HTC seems to have an issue with noise in these well lit scenes from whatever processing they seem to be doing): 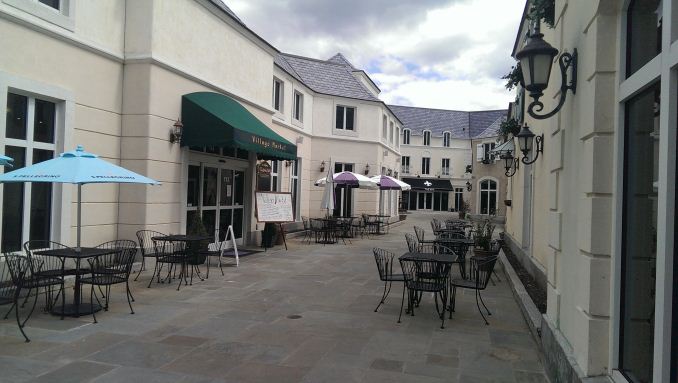 Integrating a good sensor and camera system is just part of what the One does really well here. The feature that I’ve found resonates the best among normal smartphone users is the highlights reel.

The highlights reel below is one that was automatically generated based on my photos and videos from opening day at GTC 2013:

Although highlights reels are automatically generated, you can also generate highlights of individual albums. I created an album of photos I had taken over the past couple of trips (as well as some shots I took at home) and the One created this video:

You can manually choose from multiple themes (filters/music combinations, 6 total), but there’s unfortunately no way to add your own background music yet (I suspect this is coming in the next major update).

The highlights reel is easily the most emotionally engaging feature the One has to offer, even ranking above aesthetics and build quality in my opinion. It’s the type of feature that really seems to resonate with everyone I show it to. The killer aspect in all of this is the fact that the One will put together highlights reels automatically, with no user intervention.

I can see the background music and filters getting boring after a while, and that’s why it’s very important for HTC to quickly enable end users to supply their own audio tracks (as well as quickly - and regularly - expand the collection of filters offered).

The downside to the One’s highlights reel autonomy is the feature remains relatively buried, almost hidden in the gallery app rather than front and center like Blinkfeed. The highlights reel is easy to demonstrate to someone else, it’s just not as obvious of a feature when you pick up the phone for the first time.

I haven’t touched on Zoe, the ability to simultaneously shoot stills and record a short video - both at full res. Zoe is a difficult feature to really explain without demonstrating it, but it does wonders in the creation of highlights reels. Zoe is a great way of dealing with the problem of what to do when your subject is in motion - do you hope for a good still or just capture a video? Zoe interestingly enough does both. It’ll capture a 1080p30 video, as well as 20 full resolution (4MP) stills at the same time.

I’ve mostly been using Zoe as a way to make my highlights reels more interesting, but the best use case I’ve seen was actually by a friend of mine who used it to capture the actions of some street performers in Europe. In one Zoe he had performers spinning on their heads, which typically would make for a good video or an emotionless (but potentially cool) still. Zoe delivered both.

The One, like Nokia’s Lumia 920, features optical image stabilization (OIS), which is designed to help both in shooting video as well as improving low light performance. In practice, I’m not super impressed with the OIS implementation on the One. It seems to need a bit of tuning, but I’ll leave it to Brian to explain exactly what’s going on.

Shot to shot latency on the One is amazing. Video quality is solid as well.

The One has the physical beauty to get you interested, but the camera prowess to keep you engaged.