Assembling the Helix HX500 is a trivial task. In any case, OnLogic pre-configures the system in a manner suitable for immediate deployment, if the end-user so desires.

The Helix HX500 sports an Insyde H20 BIOS offering multiple configuration knobs meant for system administrators in business settings - including Management Engine configuration for AMT support. One of the interesting aspects we had not seen in the BIOS of earlier OnLogic systems is the activation of the memory tester upon every boot-up / reboot. The video below presents the entire gamut of available options.

The AIDA64 system report for the hardware configuration provided the following information:

The CPU PCIe lanes, and most of the other PCIe lanes off the PCH are left un-used, but the upgraded Helix HX600 / HX610 (not tested) does put them to use. We also managed to get a pictorial representation of the internal bus structure in relation to the external ports. 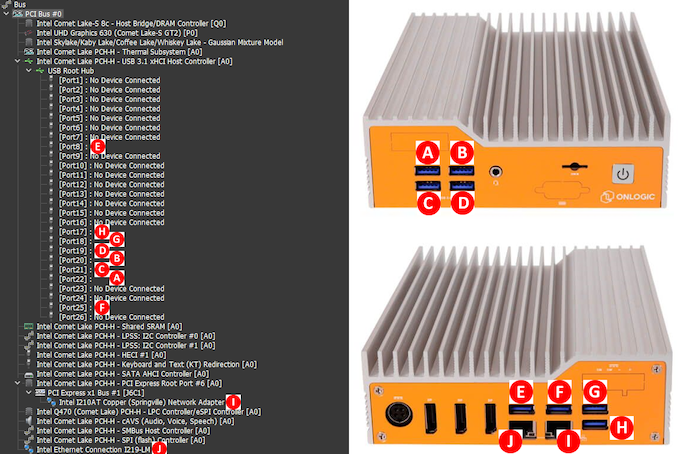 It can be seen that all the high-speed I/O ports in the HX500 are from the Q470 PCH. CPU communication with multiple peripherals simultaneously can get bottle-necked by the DMI link between the PCH and the CPU. However, industrial PC use-cases are probably going to be fine with that limitation.

Thanks to the B2B focus of OnLogic, a detailed block diagram of the Helix HX500 / HX600-series motherboard is available. 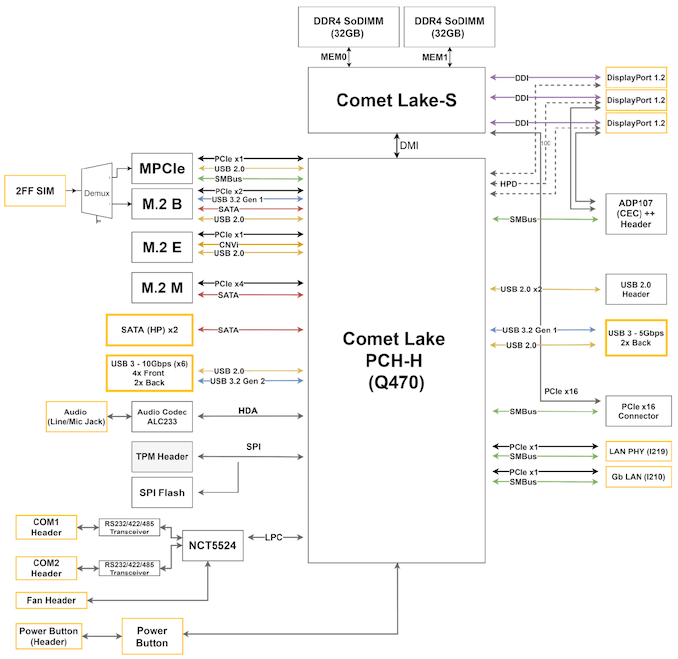 Components such as the PCIe x16 connector are usable only in the Helix HX600.

In the table below, we have an overview of the various systems that we are comparing the OnLogic Helix HX500 against. Note that they may not belong to the same market segment. The relevant configuration details of the machines are provided so that readers have an understanding of why some benchmark numbers are skewed for or against the OnLogic Helix HX500 when we come to those sections. It must also be noted that we do not have any fanless PC with an industrial focus in the list - in fact, this is the first industrial PC we are reviewing with our test suite that was revamped in 2018.

In the next set of sections, we take a look at some performance benchmarks.