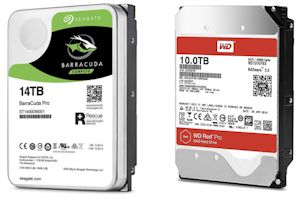 In our series of Hard Disk Drive guides, here’s the latest update to our list of recommended HDDs. All numbers in the text are updated to reflect pricing at the time of writing.

Data storage requirements have kept increasing over the last several years. While SSDs have taken over the role of the primary drive in most computing systems, hard drives continue to be the storage media of choice in areas dealing with large amount of relatively cold data. Hard drives are also suitable for workloads that are largely sequential and not performance sensitive. SSDs are yet to achieve the low $/GB metric that makes HDDs attractive in that market segment.

From a gaming perspective, install sizes of 100s of GBs are not uncommon for modern games. Despite the falling flash prices, high-capacity SSDs still tend to carry a price premium, making hard drives attractive in this market segment. This guide will help readers choose the appropriate hard drive based on their workload, while also keeping the price factor in mind.

There are three active vendors in the consumer hard drive space - Seagate, Toshiba, and Western Digital. While Seagate offers hard drives targeting desktop workloads at their leading capacity points, Western Digital and Toshiba reserve the leading edge for enterprise and datacenter drives. The previous version of our purchase guide from January 2018 only dealt with Seagate and WD drives. Since then, we have seen a number of announcements in the consumer space from both Seagate and Toshiba. These have given us a few additional HDD models to consider in our Holiday 2018 guide. The Seagate Barracuda Pro 14TB is the only newly introduced drive for which we have a hands-on review. Instead of recycling the graphs and benchmark data points from our reviews, we will be adopting a slightly different format starting with this version.

Consumers looking to purchase hard-drives need to have a rough idea of the use-cases they are going to subject the drives to. Based on that, a specific set of metrics needs to be considered. We first take a look at the different metrics that matter, and how various hard drives stack up against each other. Since many hard drive families from different vendors can satisfy the requirements, it may all come down to the pricing. We will present a pricing matrix for various hard drive families against the available capacities.

The following hard drive families will be considered in our guide today. Note that this list does not include surveillance-focused drives such as the WD Purple or Seagate SkyHawk. We will also consider some of the enterprise / datacenter SATA drives that are available for purchase from e-tailers.

A few notes are in order - the WD Gold line of enterprise drives seems to be EOL-ed - and replaced by the HGST Ultrastar DC lineup that is not yet widely available in the North American retail market. Toshiba's MN07 and MG07 series are the 9-disk models featuring industry-leading 14TB PMR capacity models. However, they are again enterprise-focused, and the retail market has to make do with the N300 and X300 drives for NAS and desktop systems.

One of the easiest ways to narrow down the search for a suitable hard drive is to look at the target market of each family. The table below lists the suggested target market for each hard drive family we are considering today.

After filtering out models that don't apply to one's use-case (as an example, for usage in a 4-bay NAS enclosure, one could rule out the Tosiba X300 straight away), it is now time to look at some of the metrics that bring out a drive's characteristics.

Based on these metrics, it is clear that the enterprise drives (Seagate Exos Enterprise and WD Gold) are going to be more reliable in the long run over a big sample set. However, the 180 - 300 TB/yr workload rating is acceptable for most consumer workloads when the drives are going to be used as part of RAID arrays.

The BarraCuda Pro strikes a nice balance across many metrics, but it is rated only for 300K load / unload cycles. It also doesn't have the RV sensors present in the rest of the drives (other than the Toshiba X300).

In considering the non-enterprise drives, we note that the 'Unrecoverable Read Errors' metric is 10x worse for the WD and Toshiba drives compared to the Seagate ones. The MTTF metric for the IronWolf Pro is slightly better than the other drives (at 1.2M vs. 1M hours).

One of the aspects not mentioned in the above table is that the WD Red drives are in the 5400 RPM class, while the rest are all 7200 RPM. From a raw performance perspective at equivalent capacity points, the WD Red might not win on benchmarks, but, it is most likely to be the most power efficient of the lot.

The matrix below shows the current pricing for each available capacity point in all the considered hard drive families.

Prior to commenting on the other possible use-cases, one thing is clear from the above pricing matrix - if you absolutely require 12TB or 14TB per disk, the Seagate drives are your only choice for purchase in the retail market. The 12TB WD Gold is available on Amazon, but priced much higher than even the equivalent Seagate Exos x12 drive. At those two capacity points, Seagate drives are pretty much the only option, and it is just a question of figuring out which of the drives makes the best sense for the application.

On the SOHO / SMB NAS front, the Seagate Exos series, despite its enterprise background, continues to make a strong case across multiple capacity points. The only places where the WD Red could edge out as a better choice are scenarios where the power consumption needs to be kept low. Fortunately, there is not much difference in the pricing between the WD Red and the Seagate Exos. The IronWolf NAS models deliver slightly better performance compared to the WD Red due to the 7200RPM nature, but, have correspondingly higher power consumption numbers. On the SMB / SME NAS front, the IronWolf Pro pretty much edges out the WD Red Pro in pricing across the board. This is despite the bundled data recovery service in the IronWolf Pro pricing.

Based on the above analysis, the recommendations for the NAS drives are clear - WD Red when performance is not as important as overall power consumption, and the Seagate Exos Enterprise drives otherwise. This is assuming that the user has adopted the 3-2-1 backup rule and doesn't foresee the need for a data recovery service (DRS). The IronWolf Pro NAS and the BarraCuda Pro both bundle the DRS. This needs to be taken into account while considering the pricing difference against other drives in the same capacity class.