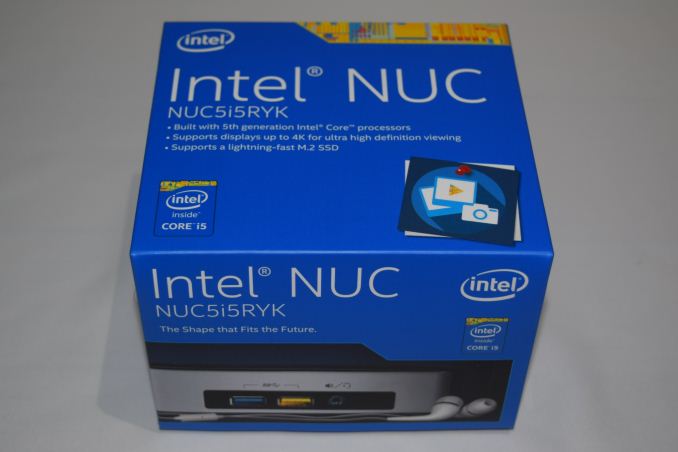 The Intel NUC category has been an interesting product line to analyze, as it provides us with insights into where the traditional casual / home use desktop market might end up. UCFF (ultra-compact form factor) PCs have had an excellent reception in the market, both from home and business users. Intel kickstarted the market with the Sandy Bridge NUCs a couple of years back. Since then, we have had NUCs based on Ivy Bridge, Haswell and even Bay Trail. Other vendors such as GIGABYTE, Zotac and ECS have their own UCFF variants in the BRIX, nano xs and LIVA models respectively.

UCFF PCs have become popular due to a host of factors - performance per watt has improved to such an extent that much of the average consumer's traditional desktop work can be done with systems sporting a sub-20W TDP CPU. SSDs are becoming smaller and smaller, with even 1 TB mSATA units available in the market. High speed interfaces such as USB 3.0 have also become ubiquitous, removing the need for dedicating storage space inside the chassis for fast access to large amounts of data. The advent of mobile platforms have also made casual gaming quite popular - and power-hungry discrete GPUs are not needed for those. All these trends have enabled powerful palm-sized computers - the Next Unit of Computing. Intel has been pushing the performance per watt aspect and GPU performance heavily in the last few generations, making each successive NUC generation more attractive than the one before.

The 14nm Broadwell CPUs were introduced into the market with the Core M branding for fanless ultraportables. Essentially a rebranding of Y-series CPUs, its power efficiency got everyone excited about what a higher TDP version (U-series) could bring for the PC market. Even as ultrabooks based on Broadwell-U are getting ready for the market, Intel and its partners have started getting the UCFF units into the hands of consumers. Intel's Broadwell NUCs were introduced at CES 2015. We have already reviewed GIGABYTE's Core i7-5550U-based BRIX s unit, giving us some insight into how a 15 W TDP Broadwell-U might perform for common workloads. In the concluding section of that review, we had remarked that it would be interesting to see how Intel would differentiate its Broadwell NUC from its partners' UCFF PCs. This review of the NUC5i5RYK - Intel's Core i5 Broadwell-U-based NUC - provides some insights.

The first Sandy Bridge NUC was important for two main reasons - the obvious one being the kickstarting of the UCFF craze. The other one was the introduction of Intel's premium external I/O interface - Thunderbolt - in a reasonably priced system outside the Apple ecosystem. Unfortunately, with Ivy Bridge and Haswell, Intel took a step backwards. NUCs based on those didn't stand out much from what was brought out by vendors such as GIGABYTE and Zotac (in the non-vPro market). With the Broadwell-U NUCs, Intel is trying to regain the edge. These units are the first UCFF PCs that we have seen with support for M.2 PCIe SSDs.

Traditionally, the NUCs are barebones machines - the end-user could choose an appropriate mSATA SSD (or, for selected models, 2.5" drives), a mini-PCIe WLAN adapter, DDR3L SO-DIMMs and an operating system. Intel has two main changes in the barebones approach for the Broadwell-U NUCs: The WLAN adapter (Intel AC7265) now comes soldered to the motherboard. mSATA SSDs are no longer supported. In its place, we have support for either SATA or PCIe-based M.2 SSDs. Similar to the previous generation NUCs, a free SATA port is available on the board. It can be used to hook up 2.5" drives in certain models.

In order to bring out the capabilities of the NUC5i5RYK, we evaluated two configuration:

The specifications of both NUC5i5RYK review configurations are summarized in the table below.

The Intel NUC5i5RYK kit doesn't come with any pre-installed OS, but our pre-production engineering sample review unit came with a USB key containing the drivers. In addition to the main unit, the other components of the package include a 65 W (19V @ 3.43A) wall-wart (with detachable multi-country power plugs), a VESA mount (along with the necessary screws), setup guides and a QVL (qualified vendors list) for the memory and storage subsystems. The gallery below takes us around the package contents and the external features of the unit.

The NUC5i5RYK officially supports DDR3L SO-DIMMs at 1600 MHz. The Kingston HyperX modules that we utilized for the mainstream build had no trouble whatsoever in operating at the rated speed and latencies. For the enthusiast build in which we went the M.2 PCIe SSD route, we initially tried to use the Corsair Vengeance 2133 MHz (C11) kit that worked well in the Broadwell BRIX s unit. Unfortunately, the NUC refused to boot with that kit. Given the pre-production nature of the kit and the absence of the Corsair Vengeance series in the QVL, it didn't come across as too much of a surprise.

In any case, we were able to utilize the 1866 MHz (C10) kit without any problems whatsoever. The BIOS (with memory auto-configuration by default) automatically configured the memory speeds to the maximum rated value. Intel's Visual BIOS is one of the few UEFI BIOSes that provide a good user experience. Plenty of configuration options are available for the end-user (including configurable maximum sustained as well as burst power consumption). The gallery below shows the various BIOS options available.

Certain default configurations (such as disabling of the WLAN subsystem) in the BIOS are questionable, but they should be hopefully fixed by the time the NUC5i5RYK officially starts shipping to end users.

In the table below, we have an overview of the various systems that we are comparing the Intel NUC5i5RYK (Enthusiast) against. Note that they may not belong to the same market segment. The relevant configuration details of the machines are provided so that readers have an understanding of why some benchmark numbers are skewed for or against the Intel NUC5i5RYK (Enthusiast) when we come to those sections.