QNAP took the SMB / SOHO NAS market segment by storm with a host of CES announcements. The release of the AMD G-series SoC-based TVS-x63 was undoubtedly QNAP's major announcement at the show. Though we didn't specifically mention it in our initial coverage, QNAP tags the members of that lineup with the 'Golden Cloud' moniker. Keeping with the theme, two other new high-performance product lineups got a similar treatment

In addition to the above two, QNAP also launched the TS-x31+ series, based on an Annapurna Labs SoC. Without further digression, let us get into the details of each of the lineups.

COTS NAS vendors usually try to keep the breadth of hardware offerings to a minimum. We often see a lineup differentiating only on the basis of number of bays, with the core platform remaining a constant. On the x86 front, particularly, vendors usually have an Atom-based model. The next step up is usually a Pentium or a Core i3-based unit. Consumers wanting a bit more CPU horsepower have no option but to shell out for a Xeon-based unit beyond that.

QNAP is aiming to fill this glaring hole in the market (not only in their own product stack, but also every other COTS NAS vendor) by populating the TVS-x71 series with processors ranging from a Pentium G3250 to a Core i7-4790S. The table below summarizes the various models in the lineup. 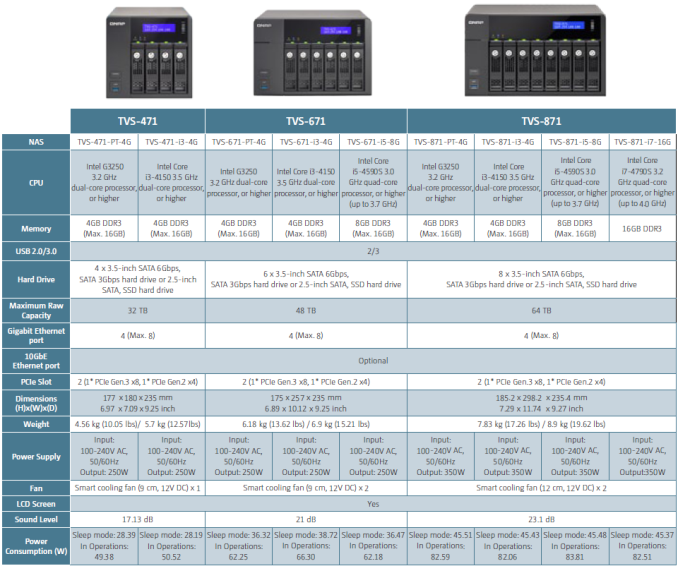 I am particularly excited by the 8-bay models with powerful quad-core processors. I am currently putting the QNAP TS-853 Pro through long term testing by running two virtual machines on it while using it as a media file server. Often, I have seen heavy activity in the VMs choke up the media serving capabilities (partially my fault for allocating two cores to each of the VMs, leaving very few CPU cycles for the primary functionality). Using a 4C/8T processor such as the Core i7-4790S ought to make scenarios such as the one I am testing out a walk in the park for the relevant unit.

All the Haswell models used in the TVS-x71 have an integrated Quick Sync engine and support VT-x. Full 4K decode and display is supported. All the Core-series CPUs used in the lineup also support AES-NI. So, other than the Pentium-based models, we should have hardware acceleration for encrypted volumes. Real-time transcoding for media serving is also available, as are the other QTS features that made the TS-x51 and TS-x53 Pro lineups stand out of the crowd. We don't have any official pricing information for the TVS-x71 series yet, but hope that the highest end model can come in at less than $2000.

QNAP had the 10-bay version (TVS-EC1080+) on display at their suite. The unit comes with a Xeon E3-1245 v3 processor and has 32 GB of ECC DDR3 memory. There are two mSATA ports populated with 128 GB mSATA modules for use with QTS's SSD caching feature. This leaves all 10 bays available for primary storage. A PCIe card with two 10GbE ports is preinstalled and there are four native GbE ports on the motherboard. This tower unit targets enterprise customers and is priced at $3300.

The non '+' models don't have a pre-installed 10G PCIe card, and they come in 8- and 10-bay varieties with either the same Xeon processor or a Core i3-processor.

I tweeted right after getting back from CES that Annapurna Labs was the surprise package of CES for those following the NAS platform vendors. Marvell seems to be taking things a bit too easy, opening up the doors for the startup to force its way into the market. Readers looking for information on Annapurna Labs would do well to peruse the Platform Details section in our piece covering the launch of the Synology DS2015xs.

Unlike Synology, QNAP has decided to use an Annapurna Labs SoC without the integrated 10G ports. We have two Cortex-A15 cores running at 1.4 GHz in the 28nm SoC that is part of the TS-231+ and TS-431+. The SoC also has two native GbE ports with enough performance for full-scale link aggregation. 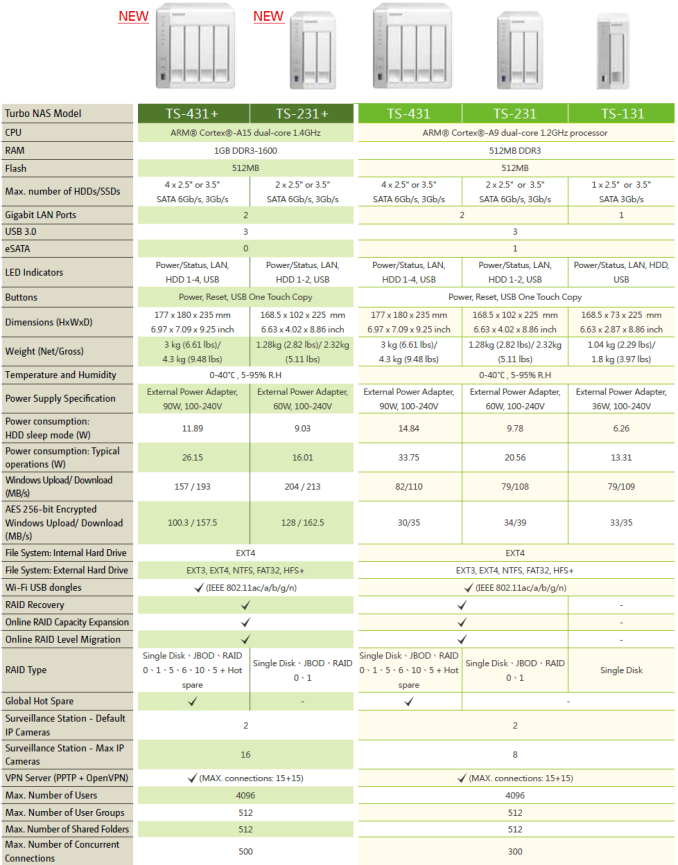 QNAP quotes transfer rates in the 200 MBps range for the TS-x31+ models. Marvell now seems relegated to the very low-end models such as the TS-x12P. Even Freescale has overtaken them with a dual-core Cortex-A9 platform in the TS-x31 series.

At the CES suite, QNAP also talked about an upcoming low-cost Bay Trail-based two-bay model without hot-swap support. We believe it will be used to address cost-sensitive markets and is unlikely to make it to the USA and EU. QNAP also updated us on their home automation initiative. Other than the publicly announced partners, QNAP is also attempting to act as a hub / one-stop interface for the multitude of home automation / security devices out in the market. Obviously, a good and consistent experience with any QPKG in this domain relies heavily on the said devices having open APIs and willing to be controlled locally. QNAP hopes to have something more concrete for announcement sometime in the later half of this year.

All in all, QNAP had a very busy CES, and, to be frank, we were overwhelmed (in a good way) by the number of announcements. In terms of sheer number of features available, QTS is well ahead of the rest of the COTS NAS OSs - they have the lead in hardware-accelerated media transcoding and creating a stable front-end for QEMU with the Virtualization Station package. However, the overall QTS user experience could do with some improvement. In addition, the challenge for QNAP will be to maintain a cohesive strategy moving forward and keep up with the need to maintain and support a wide variety of hardware platforms.