Aside from the formal press releases from Corsair already announcing the new Carbine 100R, the Hydro H110i GT all-in-one liquid cooler, the HG10 N780 GPU Bracket and their new flash storage options, at their suite there was a couple of interesting things worth discussing regarding DRAM. A small portion of the suite had the recently released GIGABYTE X99-SOC Champion (which we have reviewed), but plugged in to this was a set of orange DDR4-3400 memory. 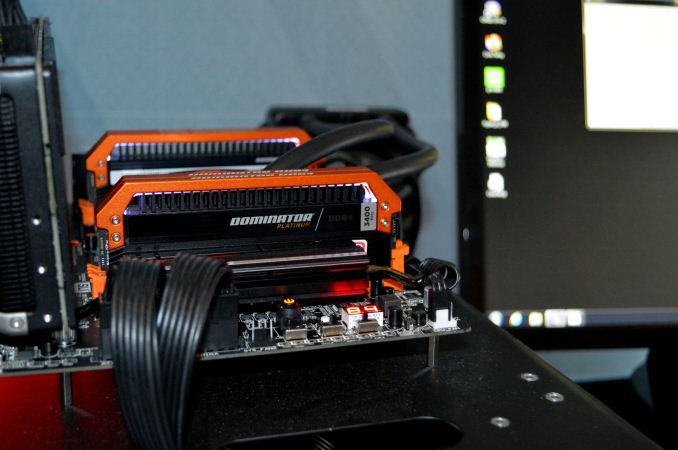 Up until this point, Corsair had released DDR4-3200 (we have a kit of this in to test) at $740 for 4x4GB to DDR4-3333 at $910, but DDR4-3400 pushes the margin out a bit more. With most DRAM, binning for higher speed hits the law of diminishing returns – you have to bin more ICs to get the high speed. As a result, these modules will be pretty expensive, and because it is X99 which needs four modules to reach quad channel bandwidth, a user has to buy all four. At the suite, they even had them running with a small overclock to DDR4-3500: 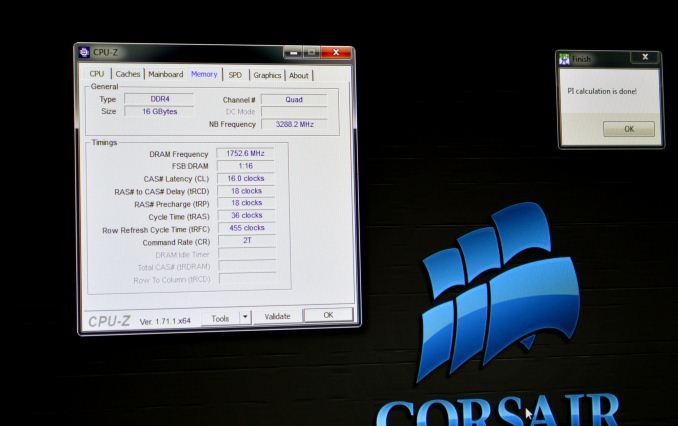 This sets them up to be very expensive. They are currently on Corsair’s website for $999.99 for a 4x4GB kit. To put that into context, two sets of 4x8GB DDR4-2133 C13 will run at just over $1000 combined, making these modules almost 4x the cost per GB than the base JEDEC frequency memory. These DDR4-3400 modules are set at 16-18-18, which is looser than JEDEC at 2133, but indicates that both primary sub-timings and frequency are tight compared to each other. Compatibility for this kit is so far only listed as with the X99-SOC Champion.

While the kit was impressive and did catch my eye, the following wall image caught my attention more: 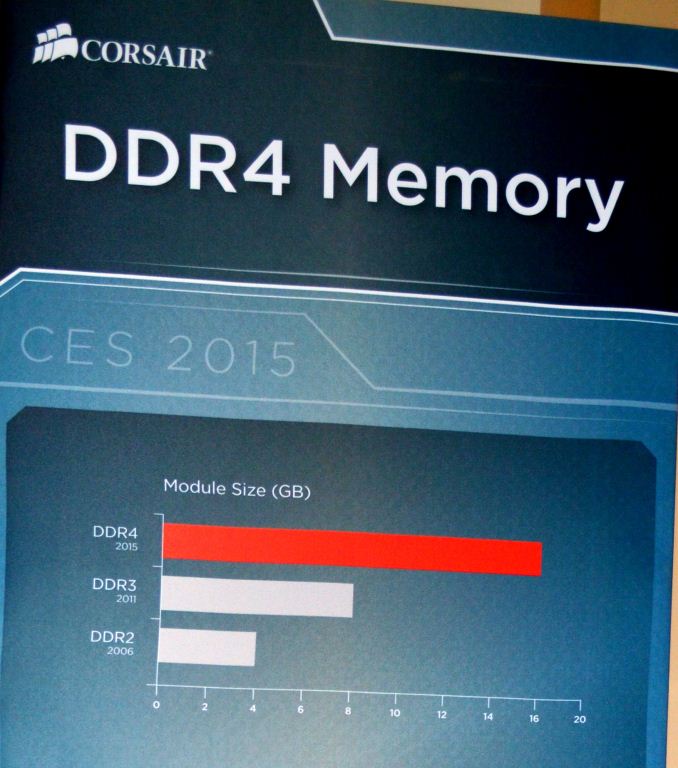 Here it explicitly states that a module size of 16GB is coming to DDR4 in 2015. Unfortunately no other information could be crowbarred out of Corsair regarding time frame or pricing, but we were able to speak with a memory manufacturer who said it should be coming in the near future. We will be working hard with Corsair to secure some testing kits if they pop up, but it means that soon we should (hopefully) start to see 128GB UDIMM arrangements on X99. It might also mean another round of BIOS updates to help support a full 8x16GB configuration. These would most likely start at DDR4-2133, as this would have the highest yields.