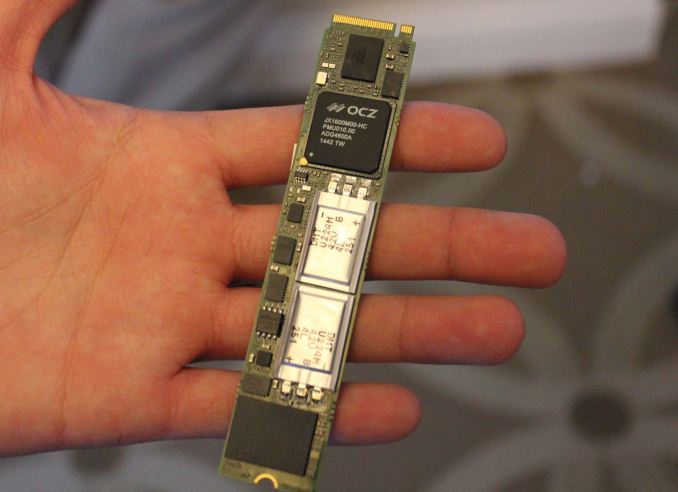 While the Barefoot 3 platform is already a couple of years old, it is still going strong. OCZ has been in the process of adopting Toshiba's latest A19nm to its whole product lineup and with all other drives having made the change, the Vector is the last (but definitely not the least) to make the switch to the latest NAND process.

Aside from the new NAND, OCZ is also adding a new 960GB capacity. We have seen many OEMs upping their capacities to 960GB/1TB in the past six months or so and the Vector 180 marks as OCZ's first client-level SATA SSD with 1TB-class capacity. The Vector 180 also features partial power-loss protection (or Power Failure Management Plus as OCZ calls it), which is not a full implementation like in enterprise drives, but there are capacitors to ensure that data at rest is safe. In other words, all user data in the DRAM buffer will still be lost in the case of sudden power loss, but the capacitors ensure that all metadata is safe and that the drive will continue to operate normally after a power loss (i.e. the NAND mapping table won't be lost, which can brick the drive or at least slow down the next boot up as the drive has to go through recovery process). 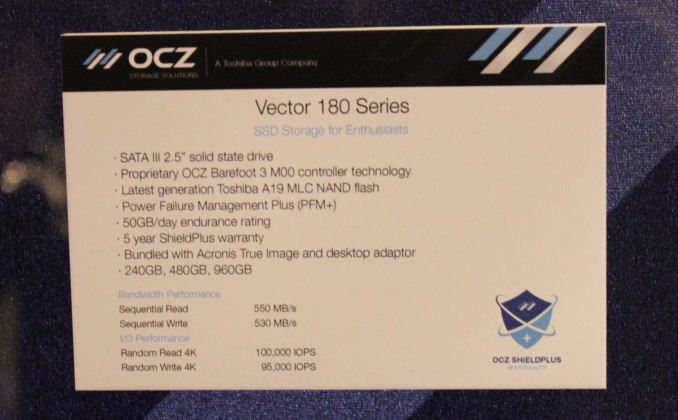 The rest of the specs remain pretty much unchanged from the Vector 150. The drive is rated at 50GB of writes per day and carries a 5-year ShieldPlus warranty (no purchase receipt required and all defective drives will be replaced with brand new units). Given that the controller and the underlying firmware remain unchaged I would expect the performance to be very similar to the Vector 150.

Unfortunately, the Barefoot 3 platform still doesn't support low-power states, so the main market for the Vector 180 will be in desktop systems. This is a problem in the silicon itself (it is two years old, after all) and to fix that the silicon would require a redesign, so instead of spending resources on that OCZ has decided to focus on the next generation JetExpress controller.

Originally OCZ's plan was to release the Vector 180 here at CES, but the company decided to spend a bit more time validating the drive to ensure that everything is okay (which, as some of you may remember, is quite different from what OCZ used to do a few years ago). Availability should be in the coming weeks, though, and I would expect pricing to be close to the Vector 150 or perhaps a bit lower given the new, more cost efficient NAND. 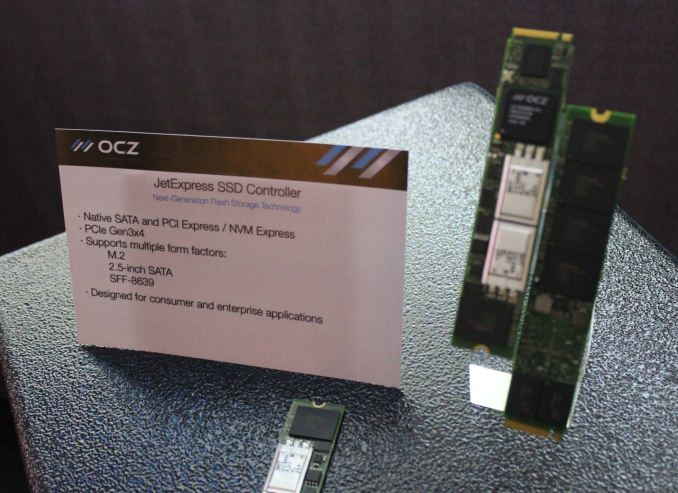 The big and obviously interesting news is OCZ's JetExpress controller. It's a native PCIe 3.0 x4 controller with NVMe support and SATA/AHCI are also included for legacy support (SATA isn't going anywhere anytime soon anyway). In terms of features the JetExpress has pretty much all the bells and whistles. DevSleep, TCG Opal 2.0, eDrive, LDPC error correction and TLC NAND are all supported. The controller itself is small enough to fit in M.2 as seen above, unlike the FPGA designs that we have seen in drives like the Samsung XS1715.

Architecturally the JetExpress sports the same Aragon cores as the Barefoot 3, but the core count is much higher (I'm hearing seven cores) with each core having its own specific purpose. The chip consists of several power islands, which can be shut down individually for increased power efficiency. The DRAM controller is massive and supports up to 32GB of DDR3, which enables very high capacities (I was told that even 10TB is achievable, although in most cases the problem is the form factor and its physical limitations, not the controller itself).

OCZ will start by shipping the JetExpress to enterprise customers in the first half of 2015 and a client release will follow in H2'15 -- most likely right around the time Intel releases its Skylake platform with proper PCIe and NVMe support.

OCZ's ECC engine is also quite interesting. The controller supports both BCH and LDPC error correction and there are three different modes (high performance, high endurance and hybrid) available. Basically, high performance mode means that only BCH ECC is used, which has less overhead than LDPC but isn't as powerful and thus results in lower endurance. The high endurance mode, on the other hand, has LDPC enabled, which increases the endurance by about 3x from what I've heard. The hybrid mode basically has BCH enabled at first, but as the NAND is cycled and starts to require more ECC, LDPC will kick in to boost the endurance. The reason why OCZ is offering all three modes is that LDPC adds some latency, so once it kicks in there is some performance loss and typically enterprise customers want a device that has predictable performance throughout its life (or at least an option to choose a mode like that). Similarly, some customers value performance more than endurance (online transaction processing is a good example since the more transactions you can do the more money you will make), so OCZ is offering the customer the opportunity to select what mode is the best for their usage.

In addition to the upcoming JetExpress drive OCZ was showing off their upcoming Z-Drive 6000 for enterprises with NVMe support. The drive comes in 2.5" 15mm form factor with the SFF-8639 connector (basically the enterprise version of SATA Express) and utilizes PCIe 3.0 x4 interface. The Z-Drive features the same PMC controller as Samsung's XS1715 but obviously the firmware is à la OCZ. Performance comes in at up to 3GB/s for sequential reads and 2GB/s for writes and random performance is up to 700K IOPS for reads and 175K for writes. Capacities go all the way up to 3.2TB, although OCZ was very confident that the company can build a 6.4TB version as well. OCZ is currently sampling a handful of key OEMs and volume availability should be in the coming months.

I spent a good hour talking with OCZ's CEO, Ralph Schmitt, about how OCZ is doing under Toshiba and what is the direction of the company, so watch out for a deeper dive after CES.