Our last ASUS TUF review was back with Z87. In terms of our sampling, TUF and ROG are obviously important, but the main models of the channel line are typically where the bulk of sales are. In the channel line (Z87-Pro, Z97-Pro, Z97-A, X99-A etc.) the software from ASUS revolves around AI Suite 3 and a multi-function overclocking tool. For the TUF line, such as this Z97 Mark S, the focus is more on temperature and component longevity, and as such we get Thermal Radar rather than ‘4/5-Way Optimization’ as the primary tool. Overclocking is relegated almost entirely to the BIOS as a result, but Thermal Radar puts an extra level of depth into the fan controls beyond those we see elsewhere.

We will look at Thermal Radar in a moment, but ASUS also has a series of other programs bundled with the Z97 Mark S. First up is Boot Setting, which allows users to go direct to the BIOS with a single click or implement fast boot modes. The primary use for this software is Windows 8/8.1 when the system is in semi-instant POST mode, although I find the software very useful for testing overclocks and re-entering the BIOS to test and fine-tune. 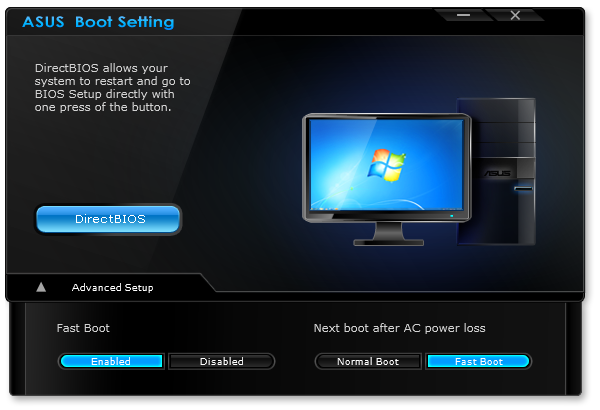 The motherboard software also has ASUS’ branded version of CPU-Z included. CPU-Z is a tool used by enthusiasts to examine the system without opening it up or going into the BIOS, such as in-depth CPU or memory details. It is also used by competitive overclockers as third-party verification about the hardware installed.

In the motherboard bundle is a skinned version of cFos, the network management software. ASUS’ frontage allows the user to select which software has network priority (by providing a software middleman for data packets before they hit the Windows network stack), making sure that users can have gaming, streaming or file sharing as their outgoing network priority. 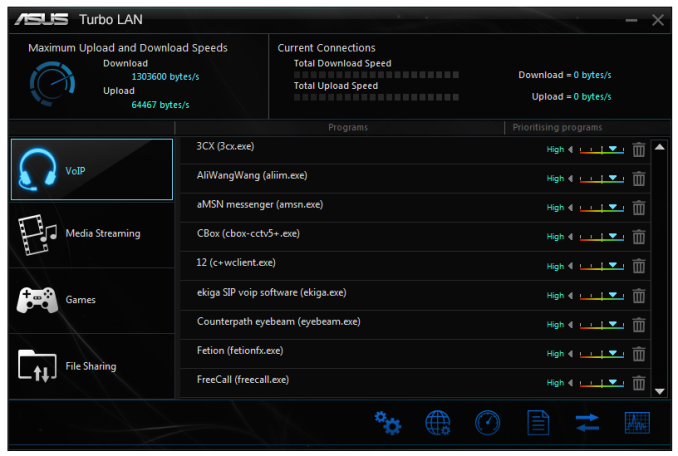 Users can also go into the more detailed settings, and these screens use basic ASUS skins over cFos’ software model. 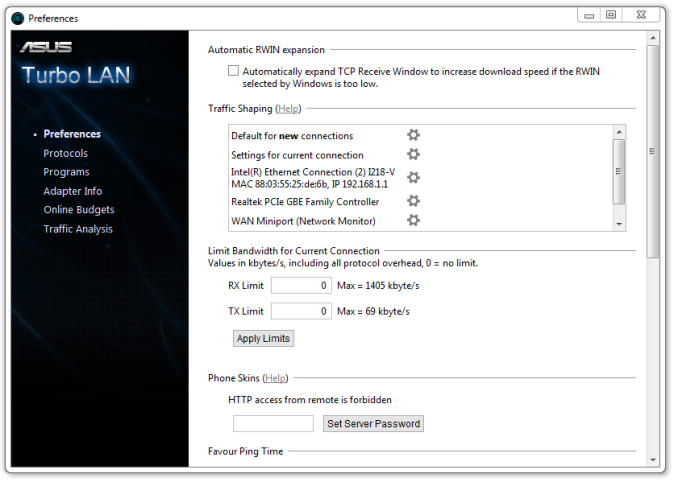 The main frontage for the software as mentioned previously is Thermal Radar, now in its second major iteration. 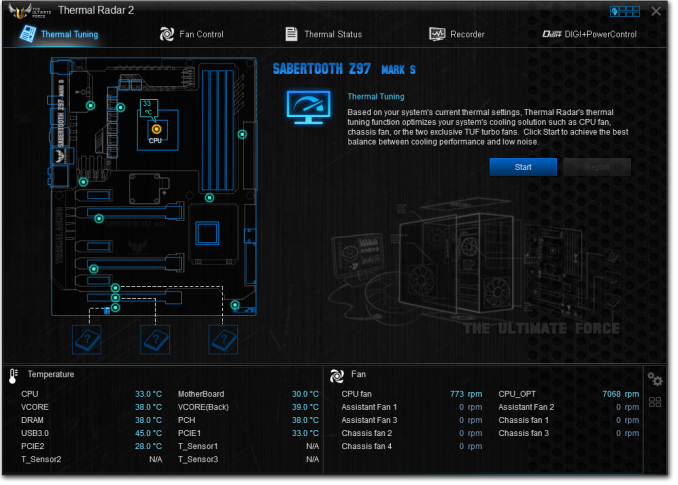 Thermal Radar, and its tool Thermal Tuning, are designed to test all the fans in the system and develop a series of fan profiles to maximize cooling with minimum noise. In general ASUS equates noise to fan RPM, which is strictly true although it might miss out any fan irregularities (e.g. some fans might develop strong noise >1600 RPM). 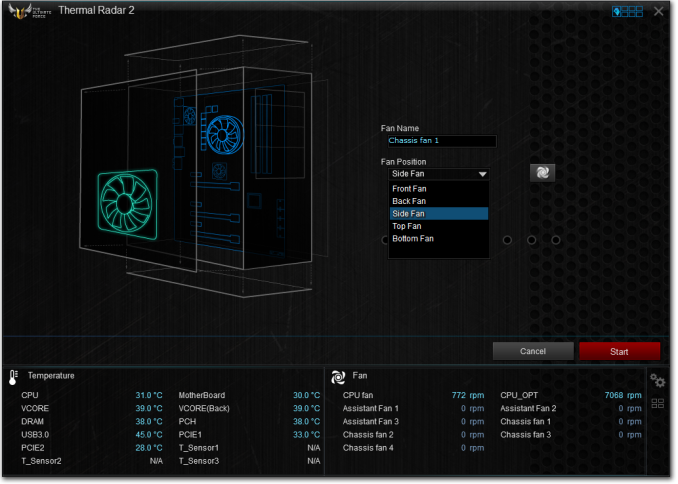 The software also likes to know where fans are placed, and users can allocate each fan header to a fan position. The software has a button for users to press in order to detect which fan is which by applying 100% power to that fan for a short duration.

When testing is done, we get a direct output for all the fans in the system: 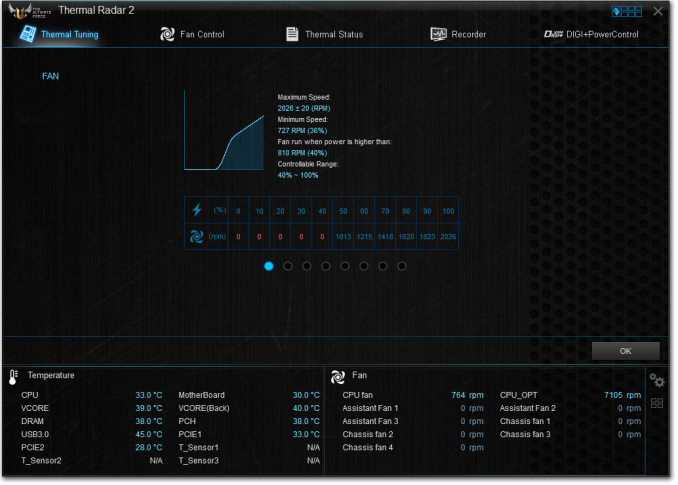 This shows the fan RPM response to power, which the system can use to adjust fan profiles: 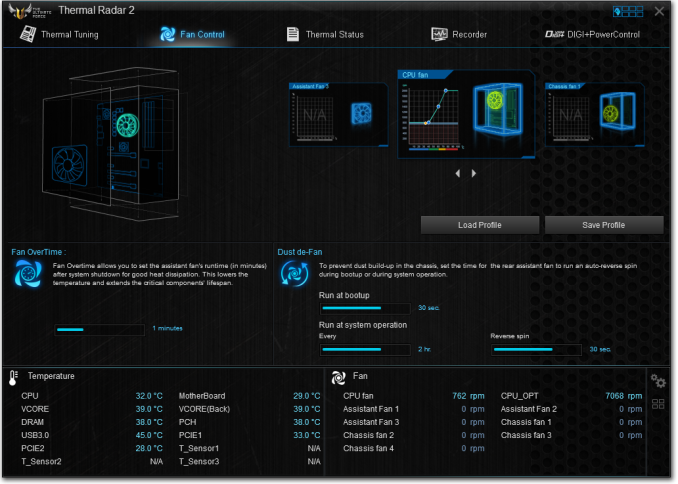 Here we see the Fan Overtime and Dust de-Fan options we saw in the BIOS, as well as a series of per-fan profile adjustments. 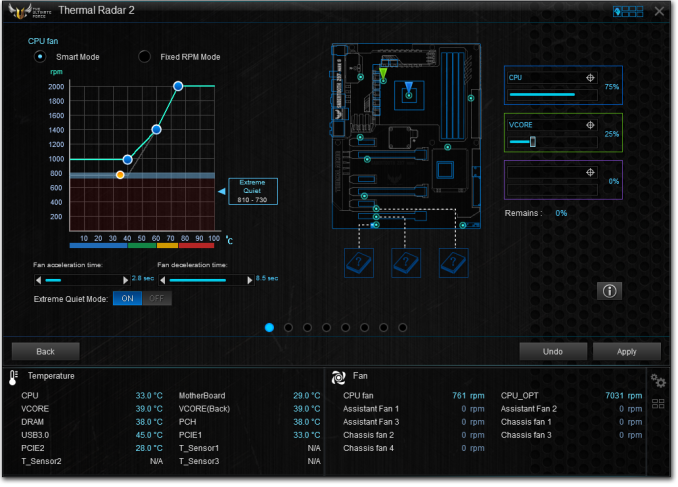 Users can adjust the three point gradient, with the ‘quiet-zone’ displayed from the testing, but the software offers an interesting way to detect the temperature. Due to the number of temperature sensors on board, the RPM/Temperature response can be configured as a fraction of multiple sensors. For example:

A side fan on the case can be a split such that:

This gives an overall temperature response to that fan of 50.5C, which might correlate to 1225 RPM according to the graph.

I should point out an additional plus point. These graphs are RPM/Temp, not PWM/Temp where PWM is the fan power. This means that the software does the internal mathematics based on the fan profile in order to get the right RPM. 12-18 months ago I said this was possible, and the mathematics might be long but it should all be straight forward. 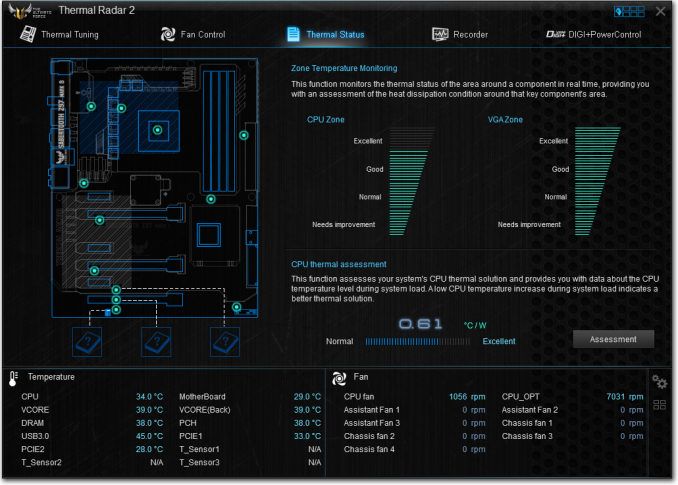 After all the settings have been adjusted, moving to the Thermal Status tab up top will give an overall assessment of the system based on the CPU and VGA zones as shown on the diagram. There is also an option for an assessment of the CPU thermal qualities. Pressing it causes the system to ramp up loading and detect how efficient the CPU cooling and settings are. 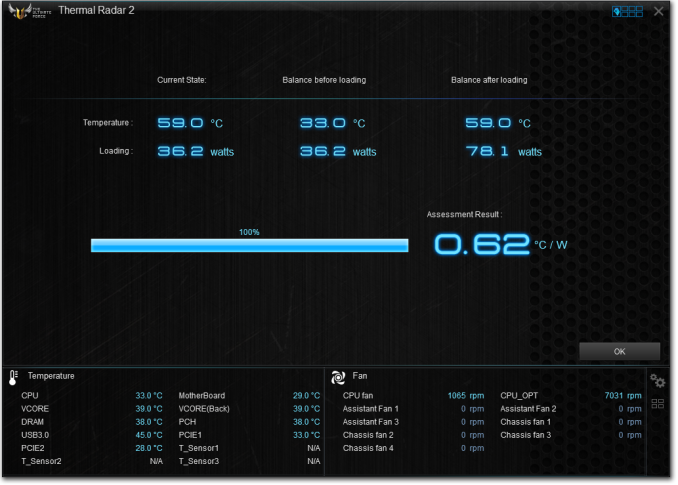 I got 0.62 degrees Celsius per watt, which is on the way to excellent but could be better. Users who invest in water cooling loops or chilled loops might get a good score here. 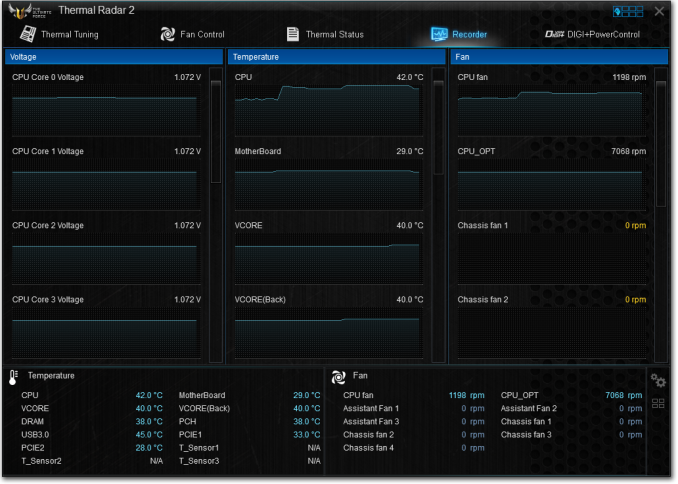 The software also offers a screen to see how these values change over time when loading is applied. Though I would point out that that all of these graphs start from zero, rather than the min-max of each sensor. 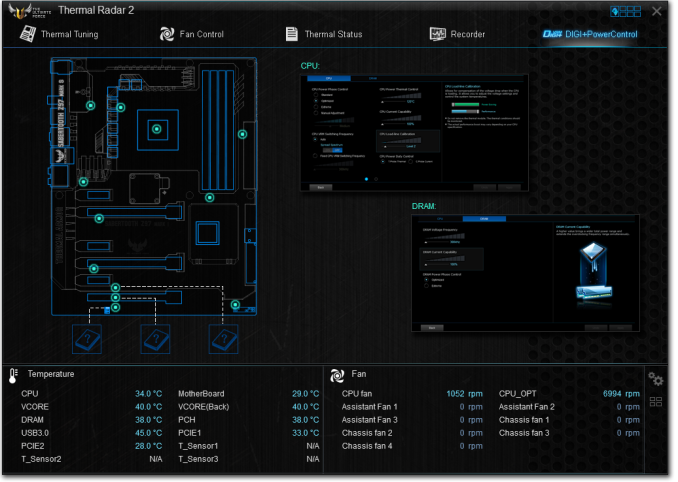 ASUS has also included the digital power controls for the CPU and DRAM, allowing adjustment of switching frequencies and load line calibration values. 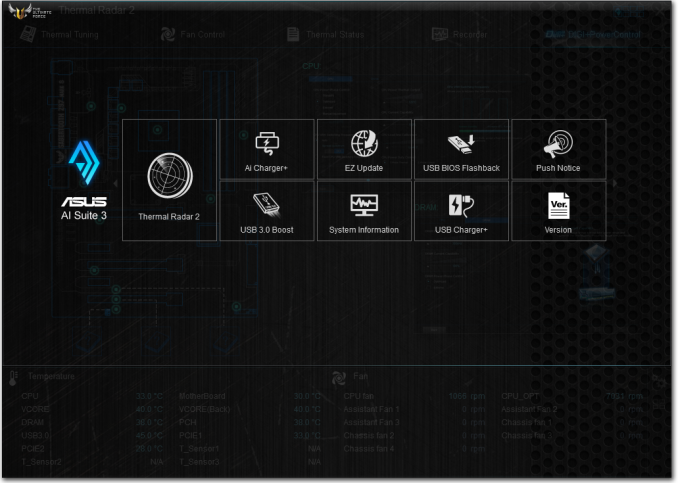 Despite all that talk around Thermal Radar, AI Suite actually has several more software options by clicking the boxes in the top right of the software. All of these we have covered in previous reviews, such as fast charging utilities, USB 3.0 Boost and USB BIOS Flashback. EZ Update is still here, designed to help update drivers and bundled software to their latest up-to-date versions, but again this software did not seem to work. Our USB 3.0 Boost results are in the benchmark pages of this review.