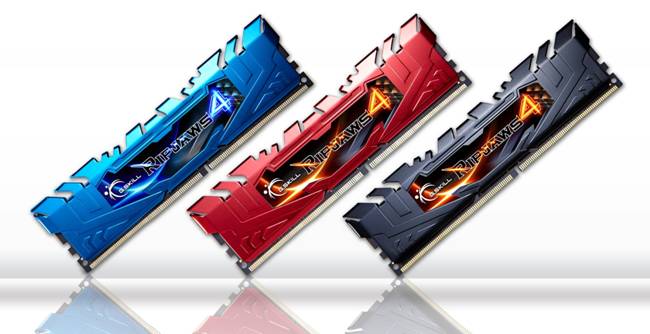 Much like the recent swathe of X99 motherboard previews we have seen, memory manufacturers are getting on board with showcasing their DDR4 memory modules to use with the Haswell-E platform. Unlike the CPUs from Intel, there is no formal NDA as such, allowing the media to report the design and specifications, although because real-world performance requires the CPU, no-one is able to post benchmark numbers.

The new DDR4 from G.Skill is the next DRAM module manufacturer to come out with an official press release, and following the previous high performance Ripjaws DDR3 range G.Skill will introduce its memory under the Ripjaws 4 moniker with a new heatspreader design.

G.Skill is reporting full XMP 2.0 support, and that this new module design matches the 40mm height of previous Ripjaws designs, allowing previous CPU coolers to be matched with this generation. As the modules are launched, the three colors G.Skill is pursuing are blue, red and black. I know G.Skill monitors our news, so if you really want another color in there, make a note in the comments.

Preorder pricing puts these modules at: