We are running a bit late with our Flash Memory Summit coverage as I did not get back from the US until last Friday, but I still wanted to cover the most interesting tidbits of the show. ULLtraDIMM (Ultra Low Latency DIMM) was initially launched by SMART Storage a year ago but SanDisk acquired the company shortly after, which made ULLtraDIMM a part of SanDisk's product portfolio.

The ULLtraDIMM was developed in partnership with Diablo Technologies and it is an enterprise SSD that connects to the DDR3 interface instead of the traditional SATA/SAS and PCIe interfaces. IBM was the first to partner with the two to ship the ULLtraDIMM in servers, but at this year's show SanDisk announced that Supermicro will be joining as the second partner to use ULLtraDIMM SSDs. More specifically Supermicro will be shipping ULLtraDIMM in its Green SuperServer and SuperStorage platforms and availability is scheduled for Q4 this year.

We have not covered the ULLtraDIMM before, so I figured I would provide a quick overview of the product as well. Hardware wise the ULLtraDIMM consists of two Marvell 88SS9187 SATA 6Gbps controllers, which are configured in an array using a custom chip with a Diablo Technologies label, which I presume is also the secret behind DDR3 compatibility. ULLtraDIMM supports F.R.A.M.E. (Flexible Redundant Array of Memory Elements) that utilizes parity to protect against page/block/die level failures, which is SanDisk's answer to SandForce's RAISE and Micron's RAIN. Power loss protection is supported as well and is provided by an array of capacitors. 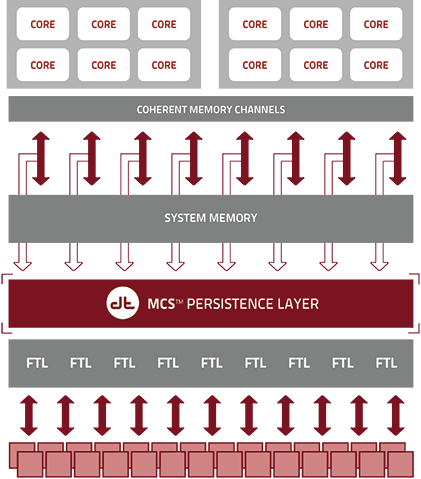 The benefit of using a DDR3 interface instead of SATA/SAS or PCIe is lower latency because the SSDs sit closer to the CPU. The memory interface has also been designed with parallelism in mind and can thus take greater advantage of multiple drives without sacrificing performance or latency. SanDisk claims write latency of less then five microseconds, which is lower than what even PCIe SSDs offer (e.g. Intel SSD DC P3700 is rated at 20µs).

Unfortunately there are no third party benchmarks for the ULLtraDIMM (update: there actually are benchmarks) so it is hard to say how it really stacks up against PCIe SSDs, but the concept is definitely intriguing. In the end, NAND flash is memory and putting it on the DDR3 interface is logical, even though NAND is not as fast as DRAM. NVMe is designed to make PCIe more flash friendly but there are still some intensive workloads that should benefit from the lower latency of the DDR3 interface. Hopefully we will be able to get a review sample soon, so we can put ULLtraDIMM through our own tests and see how it really compares with the competition.