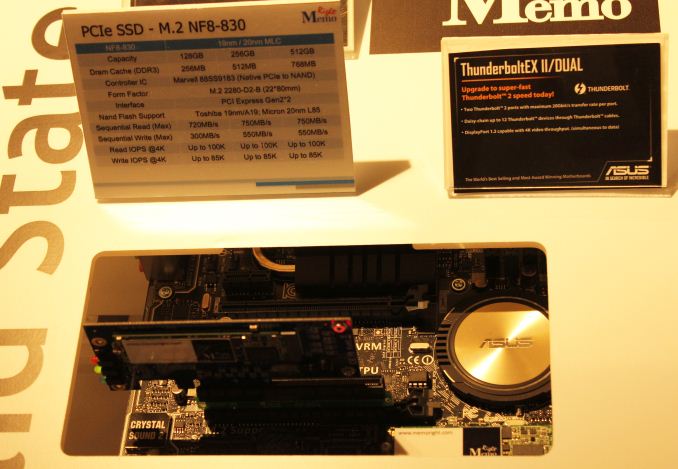 Memoright is a company that some of you might have heard of as we reviewed one of their drives back in 2011 but they have been out of the retail market for several years now. The reason is that Memoright is an SSD ODM (Original Device Manufacturer) nowadays, which means they design and manufacture SSDs but don't sell them under their own brand. In other words, Memoright's clients can buy SSDs from them, rebrand them and sell them to the consumers. The logic of their business model lies in the fact that it's much easier to deal with a handful of large clients instead of the whole consumer and retail market because you don't have to worry about distribution or B2C marketing for instance. Memoright's strength is its technology as they have their own firmware team, so it makes sense to focus the resources on that and let the partners handle the consumer sales.

Memoright uses only Marvell controllers, which is due to Marvell's investment made in early 2013. The two companies are in an alliance where Marvell provides the silicon while Memoright focuses on firmware development.

The first SSD Memoright had to show was their new PCIe 2.0 x2 SSD. The name, NF8-830, is quite awkward but remember that this is not the end-product. Memoright's clients can (and very likely will) rename the product to suit their branding. The controller is the same Marvell 88SS9183 as found in the Plextor M6e and NAND support includes Toshiba A19nm as well as Micron's 20nm NAND. The actual drive is M.2 but in the picture it's in an adapter to fit in a regular PCIe slot. The drive should already be available to Memoright's clients but due to Memoright's ODM business model, there is no way for us to know if a company is selling a Memoright drive because there is no branding and Memoright can't disclose any of its partners. 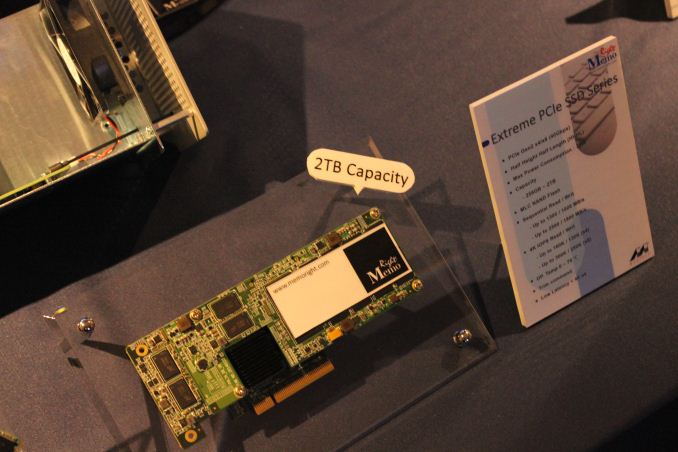 Memoright's other PCIe SSD is aimed more towards the enterprise market with the PCIe 2.0 x4/x8 interface and capacity of up to 2TB. I'm not sure what is the controller but the performance figures suggest that this could be just two or four 88SS9183 controllers in RAID 0. 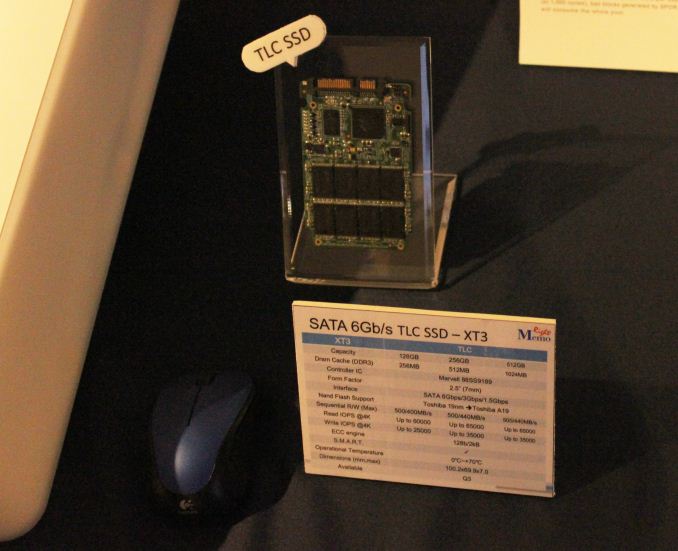 Memoright is one of the few companies that has openly discussed and displayed their TLC drive. The XT3 is scheduled to ship in Q3 and it will use Toshiba's first generation 19nm TLC NAND along with the Marvell 88SS9189 controller. Memoright wants to transition to Toshiba's cheaper A19nm TLC NAND but currently the endurance is not good enough for SSDs (from what I heard, it's only good for 200-300 P/E cycles). Once the process matures and endurance increases, Memoright expects to make the change but it may not be until next year. Memoright is also developing a new TLC SSD based on the Marvell 88SS1074 controller, which is designed for TLC NAND with improved error-correcting mechanisms.

The XT3 uses a similar SLC buffer as Samsung uses in their 840 EVO to make up for the lower performance of TLC NAND. Memoright couldn't give me the exact sizes but I would expect the buffer to be a few gigabytes at least, possibly more for larger capacities. 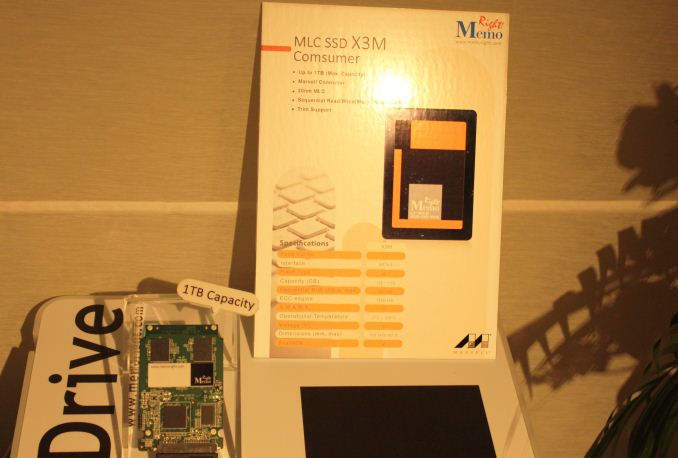 Memoright's MLC offering is the X3M, which comes in capacities of up to 1TB. The controller is currently Marvell 88SS9187, although Memoright expects to switch to the newer 88SS9189 controller with better DevSLP support. Toshiba's first generation 19nm and Micron's 20nm NANDs are supported and support for A19nm and 16nm will be included in a future firmware. 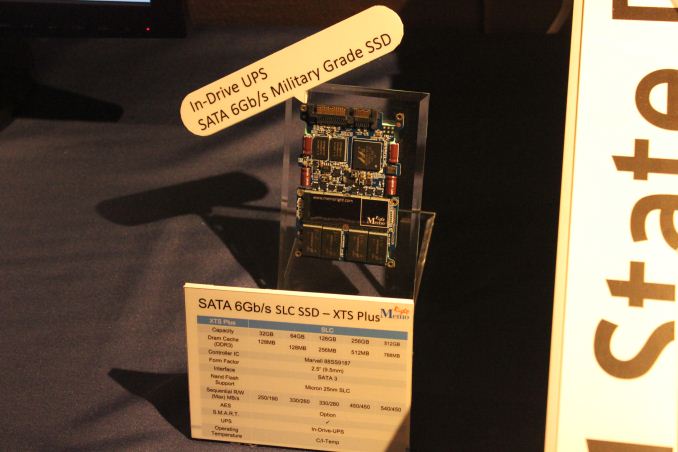 Memoright also had a "military-grade" XTS Plus at their suite. The biggest difference to consumer models is support for power loss protection along with higher endurance SLC NAND. I'm not sure if that constitutes as "military-grade" but the added features make the XTS Plus more geared towards the industrial market. 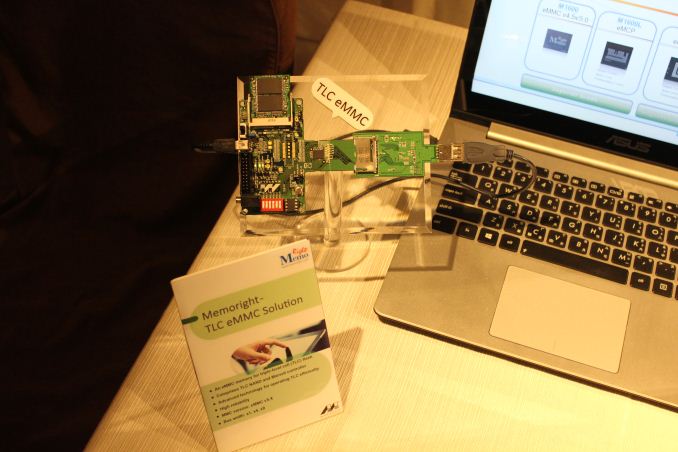 In addition to SSDs, Memoright had eMMC solutions to show. The TLC eMMC in the picture is still in development but Memoright hopes to have it available during this year. The main use of TLC is in SD cards and USB flash drives but it could find its way to low-end smartphones and tablets as well. 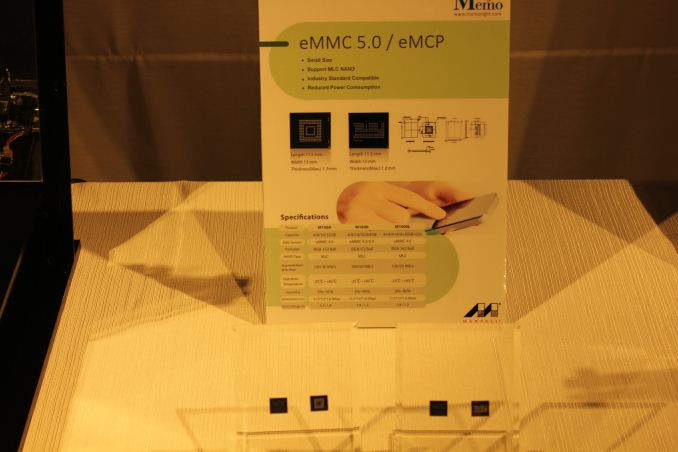 Obviously MLC as well as eMCP solutions are available too. The difference between eMMC and eMCP is that eMCP packs DRAM into the same package, making it an all-in-one kind of solution for storage and memory.