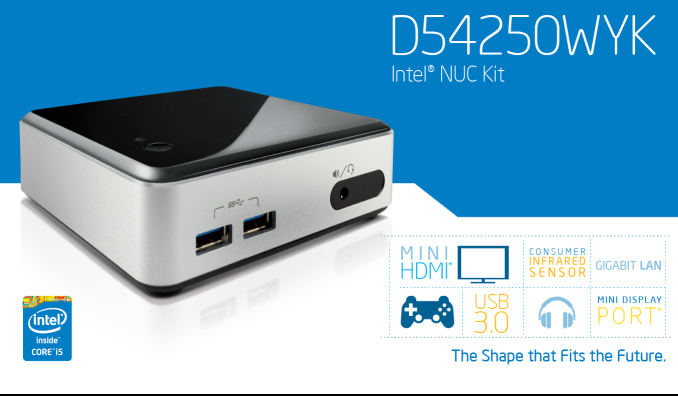 The Intel NUC category has been an interesting product line to analyze, as it provides us with insights into where the traditional casual / home use desktop market might end up. Officially falling under Ultra-Compact Form Factor PCs (UCFF), units in this category take miniaturization to the extreme by even making 2.5" drives unnecessary. Last year, we reviewed Intel's first NUC. Fast forward to the present, and we have the Haswell-based NUC already in the market. How does Haswell improve upon the original NUC? Before going into that, a little bit of history is in order.

The ultra-compact form factor (UCFF) for PCs was originally championed by VIA Technologies with their nano-ITX (12cm x 12cm) and pico-ITX (10cm x 7.2cm) boards. Zotac was one of the first to design a custom UCFF motherboard (sized between nano-ITX and pico-ITX) for the ZBOX nano XS AD11 based on AMD Brazos. The motherboard was approximately 10cm x 10cm. Intel made this motherboard size a 'standard' with the introduction of the Intel NUC boards in May 2012. The first generation Intel NUCs were both launched with Core i3 17W TDP CPUs. While one model had a GbE port, the other traded it for a Thunderbolt port.

The Haswell NUCs come in two varieties too, but Intel has opted for a more conventional configuration this time around (particularly due to the slow uptake in Thunderbolt adoption in the target market). The following table provides a quick look at the specification of the two Haswell NUCs, with our review configuration highlighted. The WYB suffix refers to the board alone, while the WYK suffix refers to the kit with the chassis. The WYKH increases the dimensions of the chassis to support a 2.5" HDD / SSD in addition to the mSATA drive.

The layout of the board is specified in the diagram below. The integration of the PCH into the processor is one of the advantages of the Haswell NUC compared to the Ivy Bridge NUCs (which used a QS77-Express chipset). 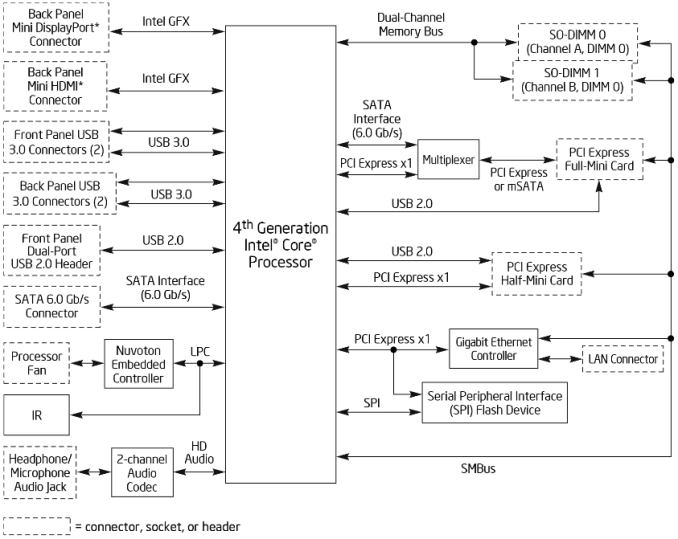 For such a small motherboard, the unit does pack quite a punch. The choice of the WLAN card as well as the mSATA disk is left to the system builder. This is in contrast to the Gigabyte BRIX, where consumers are advised not to remove the supplied WLAN card. The extra degree of freedom will definitely be appreciated in some circles. The default chassis provided by Intel employs active cooling and has a height of only 1.4 inches. This rules out the possibility of cramming in a 2.5" drive into the enclosure of the WYK, even though the motherboard provides SATA ports. The WYKH models alter the chassis dimensions to take advantage of the on-board port.

In the remainder of the review, we will look into our choice of components for completing the NUC build, some notes on the motherboard design, performance metrics / benchmarks, HTPC aspects and round up the review with some coverage of miscellaneous aspects such as power consumption and thermal performance.