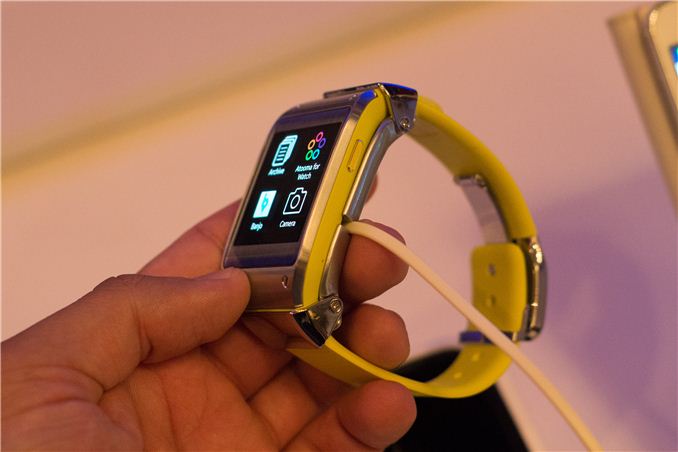 As the smartphone and tablet markets shift from high growth to the early stages of maturity, forward looking companies are looking at other adjacent markets for continued growth. Wearable computing is one of those markets. The fit makes a lot of sense. Wearable devices benefit from the same sort of things that gave us the present ultra mobile revolution (efficient software, low power hardware), and at least initially can rely on the ubiquitous nature of the modern smartphone to provide data connectivity.

Today Samsung threw its hat in the wearables race with its announcement of the Galaxy Gear: a companion device designed to be worn like a watch. The Galaxy Gear features a 320 x 320 1.64-inch Super AMOLED display mounted on a wrist strap. The Galaxy Gear is big (although not quite as big as Qualcomm's Toq reference design), with a footprint of 36.8mm x 56.6mm. It's pretty thick too at 11.1mm. The Gear isn't heavy but it's not svelte by any means. Large watches aren't uncommon, but if you're used to not wearing a watch (or wearing a much lower profile one), the Gear sticks out.

I didn't have any build quality or complaints about materials in my short time with the Galaxy Gear. The Gear didn't feel like a luxury timepiece, but it didn't feel cheap either. The relatively light weight in this case is a double edged sword. I tend to associate heft with nicer watches, and that heaviness wasn't there with the Gear. Samsung will offer a number of colorful, adjustable sized bands to help personalize your Gear. Overall the styling isn't bad but it doesn't scream beauty to me 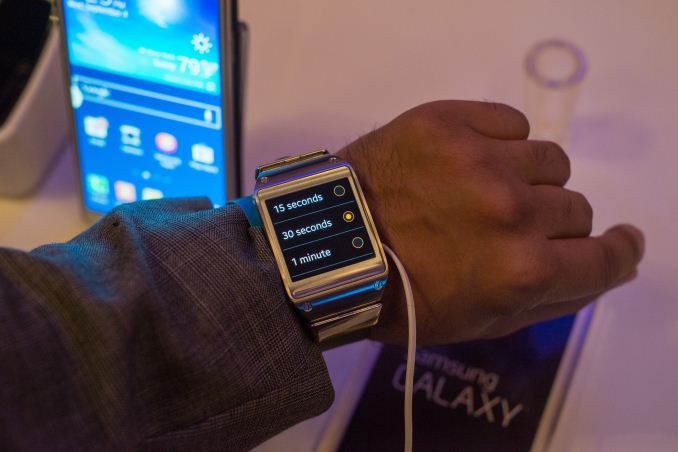 The use of a Super AMOLED display rather than some sort of an e-Ink variant changes the Gear's behavior dramatically. The display's brightness is customizable but it the display itself will shut off when it's not being used. You can't simply glance down at your wrist and see the time without first waking the device. Poking around in the settings menu I found options for a 7 second sleep time all the way up to 5 minutes. Rather than an always on display like you'd have with an actual watch, the Galaxy Gear is more akin to a smaller smartphone display that happens to be strapped to your wrist. I tried wiggling the Galaxy Gear to get it to wake up but it looks like the only option, at least initially, is to hit the power/lock button on the side. There is an accelerometer inside the device, so presumably Samsung could try and detect when you're moving your arm as if you're about to check the time and wake the screen up automatically but that didn't seem to be enabled on the devices I used. 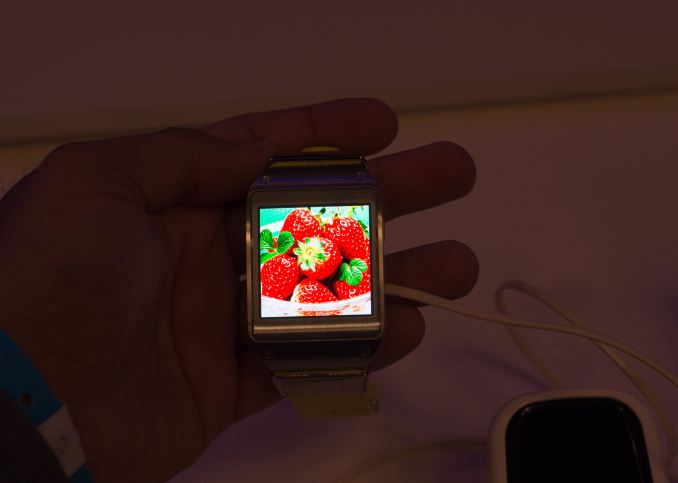 With a 1.64-inch diagonal on a square display, pixel density is actually pretty high on the Gear (~275 PPI). Color reproduction is pretty typical of what you'd expect from a Samsung built Super AMOLED display. Everything appears extremely oversaturated and very intense. As the bulk of the UI is quite simple, the display's color reproduction isn't a huge problem most of the time, it's just an issue when you're going to use that dense display to show off photos.

The Gear runs its own OS (some flavor of Android?) and it supports 3rd party apps, although there's no open SDK that I'm aware of. Navigating the OS is pretty simple although not always intuitive. Swipe left/right to switch between screens/functions/options, and swipe from top to bottom to go back to a previous screen. Left/right swipes worked fine, but it was the top to bottom swipe (back gesture) that I had trouble with. Do it too quickly and it won't register, you have to be somewhat slow and deliberate to get the Gear to pick it up. I noticed other journalists having issues with the back gesture as well. We're talking about pre-production hardware running pre-production software, so things like this could be ironed out before the Gear goes retail. 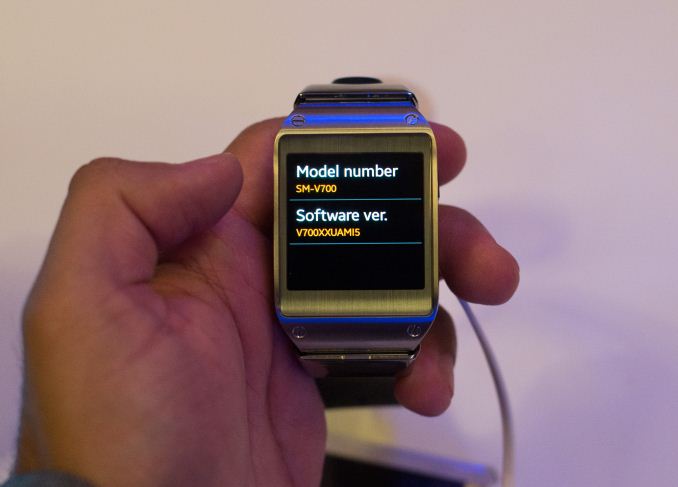 The Galaxy Gear can do a lot of what you'd expect it to. The only radio inside the device is a Bluetooth 4.0 LE radio, which the Gear uses to tether to your smartphone. At launch only the Galaxy Note 3 and Galaxy Note 10.1 (2014 Edition) will be supported, as they both ship with Android 4.3 (and thus come with BLE API support). Samsung plans on expanding support to some of its other devices in the future.

Once tethered to your smartphone you can do things like navigate your contacts and place/receive phone calls using the Gear. Contacts and your phone log are pulled from your smartphone, they aren't stored on the Gear itself. 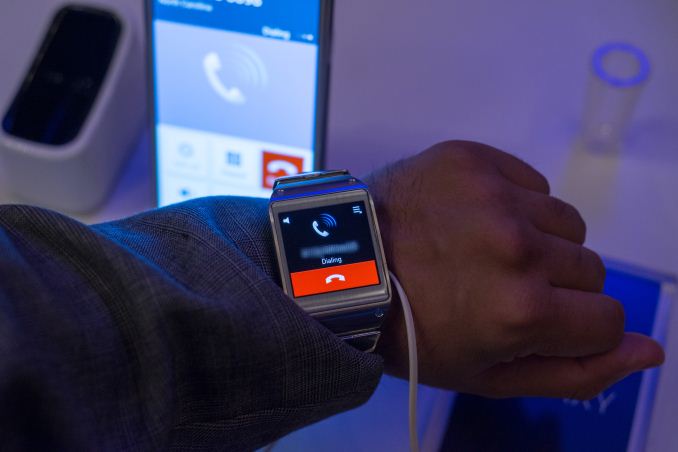 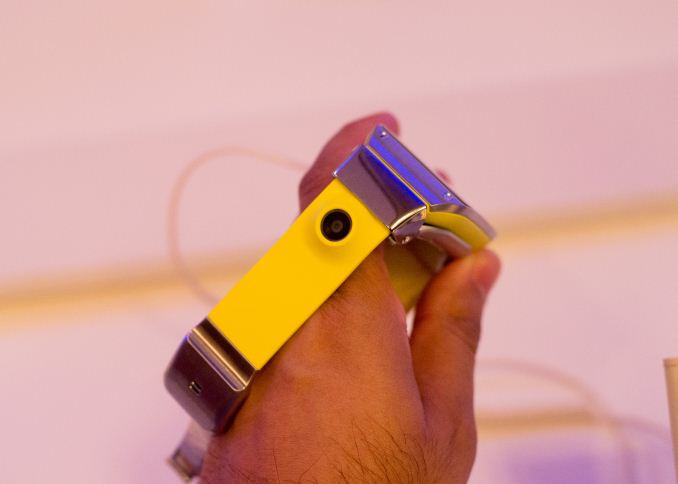 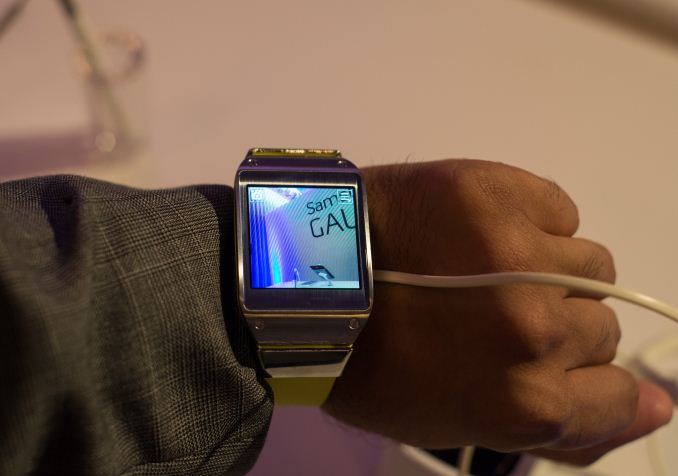 The Galaxy Gear comes with 4GB of NAND where all of these photos/videos are stored. You can choose to transfer any local content to your smartphone wirelessly. The process is pretty simple, find the photo/video you want to send, bring up the contextual menu and hit transfer. Memographer launches on your tethered Galaxy smartphone and dumps the content into your phone's gallery. Capturing photos and video is fairly quick and painless, just tap the Gear's display to capture. The camera lens and sensor are located on the front of the Gear's wrist strap, which does take some getting used to.

There are some other neat, native features that the Galaxy Gear enables. You can obviously receive notifications on the Gear, which is one of the biggest reasons to have a wearable to begin with. The Gear also has a locator function that helps you find your phone by making it ring - super useful for people who are constantly misplacing their phone around the house. There's a music app that lets you control music playback on your smartphone, and customizable clock faces of course. 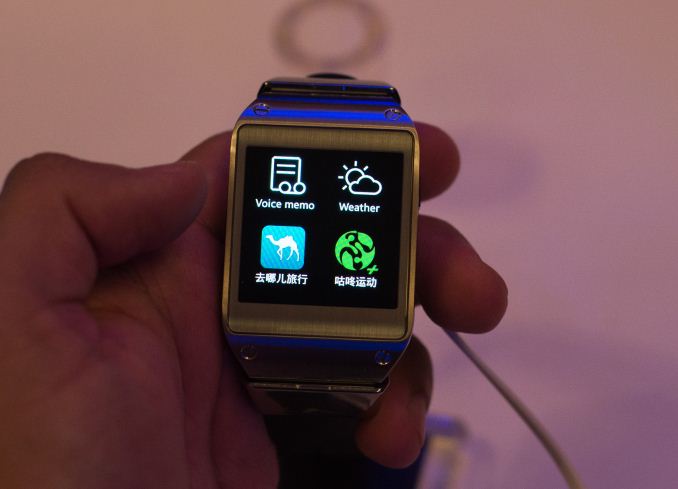 Samsung had a number of 3rd party apps pre-installed on Gear devices at its press event. The apps themselves were very simple and many were non-english, but it's clear that Samsung views Galaxy Gear as an app execution platform in its infancy, rather than just a passive device you connect to a smartphone. With that basic premise comes a set of tradeoffs that the Gear embraces fully.

The biggest tradeoff is one of power consumption. I already mentioned that the display doesn't seem to be designed to be always on, but instead it acts more like your smartphone display - only on when you need to interact with it. Looking at Qualcomm's Toq and even the Pebble smartwatch, both of those devices are based around ARM's Cortex M3 processor - a very low power, embedded microcontroller. Samsung's own semiconductor division seems to have confirmed that the heart of the Galaxy Gear is a derivative of the Exynos 4212, a Cortex A9 based design. The Galaxy Gear's spec sheet indicates a single core 800MHz processor. If we're indeed talking about a die harvested Exynos 4212, then we're talking about raw compute performance comparable to what was in the iPhone 4 - but in a watch, powered by a much smaller battery.

Samsung lists the Galaxy Gear as having a 315mAh battery. If we assume 3.8V chemistry, we could be looking at a 1.2Wh unit inside the Galaxy Gear. That battery doesn't have to power as large of a display as it normally would in a smartphone, but that's just not a lot of power if there's indeed an 800MHz Cortex A9 inside. If I'm right about the SoC/core and the battery voltage, under extended load it'd be possible to kill the Gear in a little over an hour. You probably won't be browsing the web on your Galaxy Gear so that's probably an unrealistic scenario, but even if we're talking about 5 - 10 hours of use the Galaxy Gear is still more computing device strapped to your wrist than a watch.

Despite the relatively high performing silicon, the early Galaxy Gear samples weren't what I'd consider perfectly smooth performers. Transitioning between screens was pretty quick, near 30 fps, but every now and then you'd see some stutter or a longer than desirable app launch time. Now I'm going to go ahead and assume there's a lot of optimization work that needs to be done before the Gear ships in October, but until we see final software don't immediately assume that the 800MHz CPU frequency means the Gear will be lightning quick.

Most of the Galaxy Gear samples at Samsung's press event were tethered to tables, a process which I believe obscured the Gear's micro USB port. If you dig around in the settings you'll even see an option to enable USB debug mode (lending further credibility to the OS having Android roots). 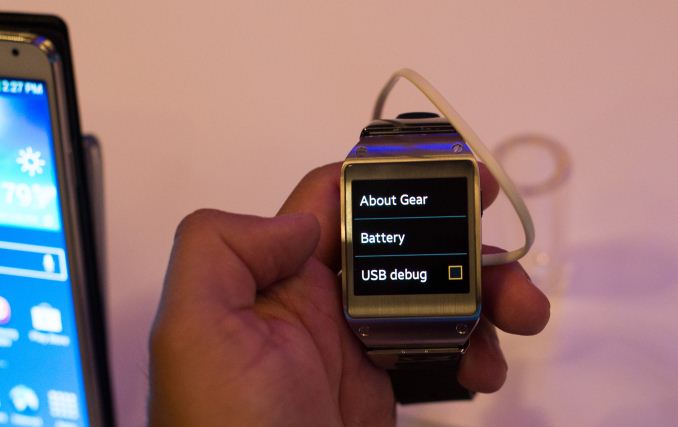 The Galaxy Gear will ship in October for $299. It's a pricey device most definitely in its infancy, but one thing all companies learned from living through the most recent mobile revolution is that it's very painful to be late to a new market. Just as Samsung's early connected cameras weren't perfect, I'm not expecting perfection out of the company's first wearables either. The trick is navigating the transition between early experiments and iterating towards perfection, when the time is right. That's the other lesson from the mobile revolution: being early is meaningless if you can't effectively manage that transition. 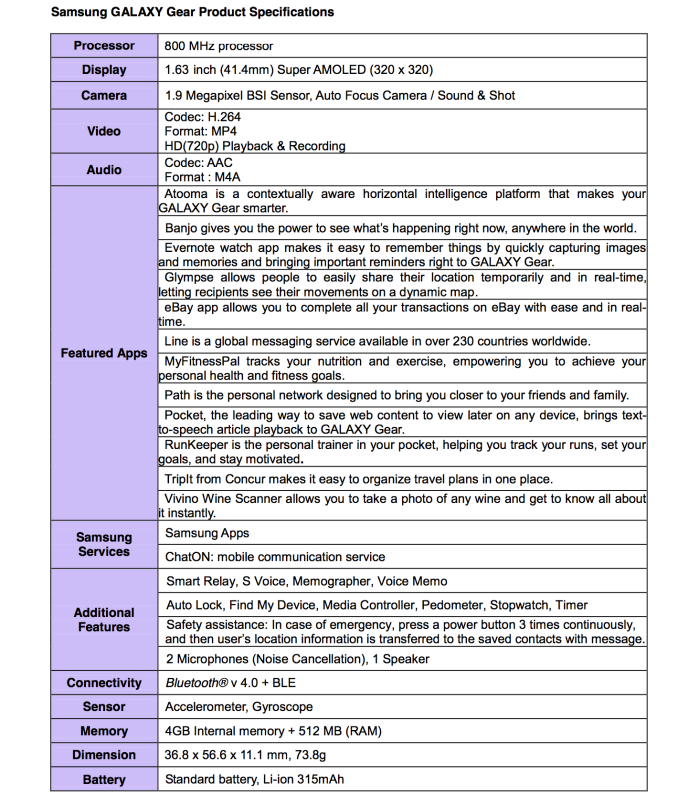