NVIDIA Tegra 4 Architecture Deep Dive, Plus Tegra 4i, Icera i500 & Phoenix Hands On

Ever since NVIDIA arrived on the SoC scene, it has done a great job of introducing its ultra mobile SoCs. Tegra 2 and 3 were both introduced with a healthy amount of detail and the sort of collateral we expect to see from any PC silicon vendor. While the rest of the mobile space is slowly playing catchup, NVIDIA continued the trend with its Tegra 4 and Tegra 4i architecture disclosure.

Since Tegra 4i is a bit further out, much of NVIDIA’s focus for today’s disclosure focused on its flagship Tegra 4 SoC due to begin shipping in Q2 of this year along with the NVIDIA i500 baseband. At a high level you’re looking at a quad-core ARM Cortex A15 (plus fifth A15 companion core) and a 72-core GeForce GPU. To understand Tegra 4 at a lower level, we’ll dive into the individual blocks beginning, as usual with the CPU.

ARM’s Cortex A15 and Power Consumption

Tegra 4’s CPU complex sees a significant improvement over Tegra 3. Despite being an ARM architecture licensee, NVIDIA once again licensed a complete processor from ARM rather than designing its own core. I do fundamentally believe that NVIDIA will go the full custom route eventually (see: Project Denver), but that’s a goal that will take time to come to fruition.

In the case of Tegra 4, NVIDIA chose to license ARM’s Cortex A15 - the only vanilla ARM core presently offered that can deliver higher performance than a Cortex A9. 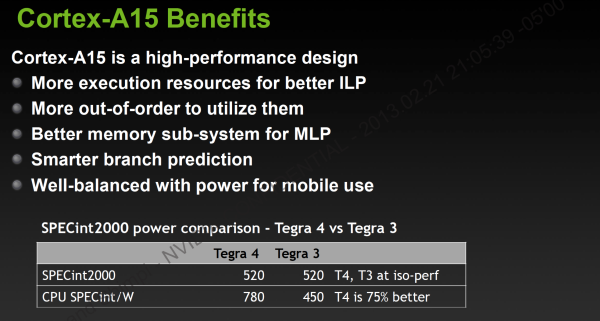 The table above is a bit confusing so let me explain. In the first row NVIDIA is showing that it has configured the Tegra 3 and 4 platforms to deliver the same SPECint_base 2000 performance. SPECint is a well respected CPU benchmark that stresses everything from the CPU core to the memory interface. The int at the end of the name implies that we’re looking at purely single threaded integer performance.

The second row shows us the SPECint per watt of the Tegra 3/4 CPU subsystem, when running at the frequencies required to deliver a SPECint score of 520. By itself this doesn’t tell us a whole lot, but we can use this data to get some actual power numbers.

At the same performance level, Tegra 4 operates at 40% lower power than Tegra 3. The comparison is unfortunately not quite apples to apples as we’re artificially limiting Tegra 4’s peak clock speed, while running Tegra 3 at its highest, most power hungry state. The clocks in question are 1.6GHz for Tegra 3 and 825MHz for Tegra 4. Running at lower clocks allows you to run at a lower voltage, which results in much lower power consumption. In other words, NVIDIA’s comparison is useful but skewed in favor of Tegra 4.

What this data does tell us however is exactly how NVIDIA plans on getting Tegra 4 into a phone: by aggressively limiting frequency. If a Cortex A15 at 825MHz delivers identical performance at a lower power compared to a 40nm Cortex A9 at 1.6GHz, it’s likely possible to deliver a marginal performance boost without breaking the power bank.

That 825MHz mark ends up being an important number, because that’s where the fifth companion Cortex A15 tops out at. I suspect that in a phone configuration NVIDIA might keep everything running on the companion core for as long as possible, which would address my fears about typical power consumption in a phone. Peak power consumption is still going to be a problem I think.