We’re not likely to be running DDR4 any time soon on desktops, and even most laptops are probably over a year away from getting the upgrade, but now is the time to prepare for the shift. To that end, Micron (Crucial) has a DDR4 demonstration running at CES 2013. The system is an Intel test platform with undisclosed internal hardware, affectionately (or perhaps not) referred to as the Frankenstein Box. My guess is that there might be an Ivy Bridge, Sandy Bridge-E, or current-gen Xeon running in the box with a converter board of some sort to allow the DDR4 to talk to the DDR3 on-die controller (similar to the RDRAM to SDRAM converters we saw back in the Pentium 4 Rambus days), but how they’re running it right now isn’t particularly important so much as the fact that they are able to run Windows. It’s just as possible that the box has an unannounced next generation Xeon with a DDR4 controller. But I digress….

The systems wasn’t open for inspection, but Crucial had an oscilloscope showing the signals on the test unit and a bootable Windows 7 platform running a bouncing balls simulation, which is what we usually see with early/prototype/Frankenstein systems. The memory was running at 2133MHz, apparently with similar timings to what we currently see with DDR3-2133, so at launch the base DDR4 speeds are going to be around twice as fast as what we saw with DDR3. The test platform unfortunately is limited to 2133MHz as the maximum clock; Crucial said they’re seeing 2400-2800MHz without any trouble, and the JEDEC DDR4 specifications currently go up to DDR4-3200. Worth note is that DDR4 makes some changes to help reduce power use, including dropping the standard voltage to 1.2V (down from 1.5V with DDR3), and we’ll likely see low voltage and ultra low voltage DDR4 in the 1.0-1.1V range.

The standard memory chips are now 4Gb compared to 2Gb for most DDR3, which makes 4GB single-sided and 8GB double-sided DIMMs the starting capacity. The initial target devices will be servers where the improved memory density and power savings are needed most, effectively doubling the amount of RAM we’re likely to see at similar price points/configurations to the current generation DDR RAM. Crucial will be releasing a full portfolio of products based off the memory chips, including RDIMMs, LRDIMMs, SO-DIMMs, and UDIMMs (standard and ECC). Mobile and desktop adoption of DDR4 is expected to occur in 2014. One change Crucial pointed out with their UDIMMs can be seen in the photo above: the edge with the 284 pins is no longer perfectly straight. The idea is that when you insert a DDR4 DIMM, it will require less pressure as you’ll only be pushing in about half of the pins at a time. 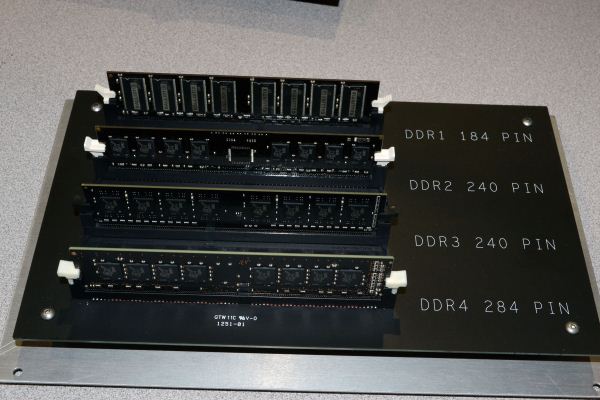 Besides the DDR4 demonstration, Crucial had a display showing their various memory modules over time, from DDR through DDR4. It’s always fun to see how far we’ve come over the past eight or so years. At the top we have a DDR DIMM with 184 pins—state-of-the-art circa 2001/2002. Launch speeds were DDR-200 (PC1600), with capacities of 128MB to 1GB being typical over the life of the product. DDR2 moved to 240 pins around 2003, launching at DDR2-400 and moving up to DDR2-1066 by the end of its life cycle; typical capacities ranged from 256MB to 2GB. 2007 brought about the advent of DDR3, and while there are technically DDR3-800 parts, for the mainstream market DDR3 started at 1066 and has officially moved up to DDR3-2133; capacities are generally in the 512MB to 4GB range, with 8GB being the maximum. And last we have DDR4, launching by the end of the year. If the pattern continues, we should see DDR4-4266 by the time DDR5 memory is ready for mainstream use and capacities will start at 2GB and likely top out at 16GB (possibly more) per module.