Though we still like to think of Intel first and foremost as a computer CPU company, the fact of the matter is the company is trying its hardest to expand their horizons. Among their expansion efforts are a push in to the smartphone space, and to further that Intel is at Mobile World Congress 2011 making their latest smartphone-related announcements.

The first announcement, and of course the one nearest and dearest to our hearts, is on the CPU side of things. Medfield – Intel’s next-generation Atom-based smartphone SoC is now sampling and will ship later this year. Intel still hasn’t thrown out a solid timeframe for when Medfield will ship, but Q4 is as good a guess as you’re going to get. 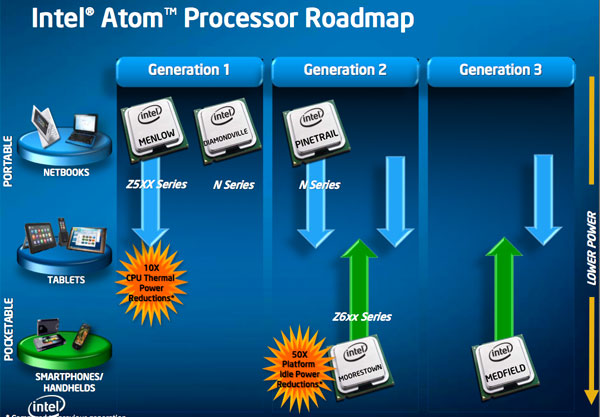 Medfield is the follow-up to Moorestown, Intel’s first Atom smartphone-sized SoC design that was launched only 9 months ago, and did not ship until the later half of last year. Moorestown has not had any major design wins, so while it’s out there you probably never have and never will see a Moorestown powered smartphone. As Intel’s first foray in to smartphone SoCs Moorestown had its teething issues – the principle platform was a 2 chip family, with only the Z6xx CPU + GPU + MC manufactured in-house at 45nm, while the MP20 PCH containing the camera, audio, I/O, and other supporting hardware was a 65nm product manufactured at TSMC. 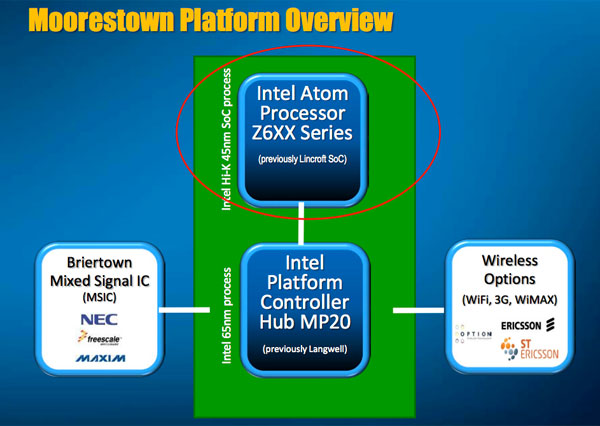 The importance of Medfield in Intel’s product lineup is that it should resolve Moorestown’s teething issues. The CPU and PCH are being integrated on to a single chip, and the entire product is being built on Intel’s 32nm process, which will allow handset makers to more easily fit Medfield in to phones thanks to the reduced chip count. Architecturally Medfield is not a significant overhaul – we’re still looking at a power optimized in-order Atom – but a die shrink for the CPU and effectively two die shrinks for the PCH should go a long way towards increasing performance; the last thing we heard in this respect is that GPU performance should double, while CPU performance has not been commented on. In any case at 32nm by the end of this year, Intel will have a process advantage over its SoC competition, who will still be on 4Xnm until they transition to 28nm some time next year.

Of course Medfield is not an entire smartphone on its own. Additional supporting chips – chiefly a modem – are necessary. As you may recall, Intel picked up Infineon’s wireless solutions business back in August of 2010, giving them modem technology to go with their Atom SoCs. Down the line we’ll see Infineon-derived modems integrated in to Atom SoCs, but for now Intel is still using separate modems developed by the new Intel Mobile Communications group, which is the basis of the other major piece of news coming from Intel today.

Intel announced their first compact, low-power multi-mode LTE modem (LTE/3G/2G), the XMM 7060 platform, powered by the X-GOLD 706 baseband processor. It will begin sampling in Q3 this year, and will ship roughly a year later in H2 of 2012. The multi-mode modem is important both for Intel and for Infineon’s traditional customers. For Intel it’s something to sell alongside Medfield, while for customers after just the modem it’s going to be among the first low-power LTE modems on the market. With the additional complexity of LTE, LTE modems had to be similarly beefed up compared to their 3G brethren, which in turn can hurt battery life. Low-power modems should bring power consumption back in balance with today’s 3G modems.

On a side note, given that Intel only recently acquired Infineon's wireless group, it shouldn't come as a big surprise that the X-GOLD 706 is being fabbed out of house. Intel says it will be a 40nm product, which means it's likely being fabbed over at TSMC.