Most of our readers have probably used a DVR (Digital Video Recorder) device at some point in time. TiVo was the first such device to gain mainstream recognition, but in reality, PC owners have been able to do most of what TiVo offered for a long time. ATI's All-In-Wonder line has had TV-In capability since the days of the old ATI Expert line with Rage graphics chips. Of course, the ability to do something like watch or record TV on a PC is not the same as the ability to do that well, and thankfully, we've made some serious progress in that area over the past decade. Our last TV tuner card roundup is almost six months old, and while much of the information is still current, we do have some new cards some might be considering.

Today, we have a trio of TV Tuners for review, and while they have some similarities, they're also quite different in features, software, and performance. Two of the cards are - as far as I'm aware - the only HDTV tuners currently available for Windows that will handle QAM decoding. The cards are the MyHD MDP-130 and the DVICO Fusion5 Gold. (Older DVICO and MyHD cards may have handled this as well, to varying degrees.) The third card marks one of the first truly interesting PCIe X1 cards to appear on the market, the PowerColor Theater 550 PCIe.

The MyHD and Fusion5 cover the "everything plus the kitchen sink" range of tuner cards, while the Theater 550 is more focused. Where the former offer QAM decoding, HDTV, and digital and analog capabilities, the Theater 550 is an analog-only card. At first, it might seem like this is an unfair match-up, as we have HD capable cards going up against a card that only handles SD analog TV. Unfortunately, reality tends to make the importance of HD functionality less important than most people would like, and the ability to receive and record analog channels well may actually be the more important factor for most people.

It's entirely possible that there are areas where most channels are available in HD, but at least in Washington, the options are rather limited. The major networks all have HD channels - ABC, CBS, Fox, and NBC - but the amount of actual HD content is relatively limited. The USC games for most of this season, for example, were not available in widescreen - only the recent Bruins game was in HDTV. The vast majority of programming is still standard TV upsampled to HD resolutions. Generally speaking, if a broadcast isn't in widescreen format, it's not truly HD (though it could still be Digital TV). ESPNHD SportsCenter broadcasts provide a great example of the difference between native HD and upsampled SD, as the program contains both types of content. Watching a clip from a widescreen NBA game followed by another clip from a different game that is upsampled SD shows a dramatic loss in quality for the latter. 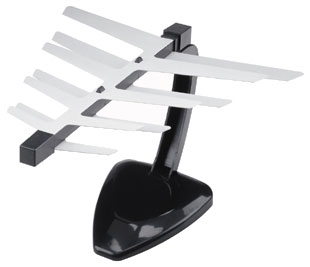 First, let's answer this question: Why is QAM decoding important? For those who live in areas where "terrestrial" or OTA (Over The Air) broadcast reception is poor or downright non-existent, cable or digital satellite is generally required. Cable companies use QAM encoding on their digital channels, and while no cards currently support playing encrypted QAM channels, being able to record/timeshift the unencrypted channels is a definite plus. Depending on your location, OTA Digital TV reception can be easy to get with something as small as the pictured Silver Sensor antenna, or you may need a large roof-mounted antenna with a signal amplifier. At my location, a small indoor antenna is not sufficient for receiving OTA DTV, and while a larger antenna mounted on the roof might work fine, that's often not an option on rental or apartment housing. Besides, there are certain cable channels that I would want regardless of how good my OTA DTV is, like ESPN, Discovery, Cartoon Network, etc. Since I'm already subscribing to a cable service and since OTA reception is a problem without investing quite a bit of time and money into a better antenna, that makes the capabilities of the Fusion5 and MyHD all the more interesting to me - and hopefully some of you as well.

I've been using all three cards for several weeks watching and recording broadcasts and now have a pretty good feel for how each performs, where it excels, and where it falls short. Initial impressions on some of the cards changed quite a bit over time, due in part to the learning curve associated with the technology as well as some hardware and drivers/software updates. Some problems that, at first, seemed like deal breakers ended up having a solution, while other areas that appeared to work okay ended up causing difficulty later. There may be areas that I overlooked, as I don't purport to know everything that there is to know about TV tuners. However, if something is difficult enough that I can't find a reasonable solution within several weeks, that's going to be a problem for many consumers. Let's see if one card can emerge as the clear leader, or if they all come up lacking.

We'd like to thank Digital Connection for providing us with the MyHD MDP-130 and Fusion5 Gold cards for testing. They are one of the few places to carry such cards, but they're reasonably priced and knowledgeable. They answered many of our questions and helped to give us a better understanding of the various software and hardware options. They have quite a bit of information on HTPCs and HDTV accessories.