Assembling the NUC BOX-1165G7 is a trivial task involving the removal of four screws to take out the bottom panel, followed by slotting in two DDR4 SODIMMs and a M.2 NVMe SSD. Users opting for a 2.5" drive have the SATA data / power cable affixed to the bottom panel. The cable hooks up to the motherboard using a slim SATA header at the edge of the board near the SODIMM slots.

The NUC BOX-1165G7 sports a spartan BIOS interface that is acceptable enough for a system meant for business deployment. Beyond basic options controlling CPU operating parameters, we do not have much in terms of fine-tuning performance. In any case, for the type of deployments that the NUC BOX-1100 series would see, those types of options are unnecessary. The video below presents the entire gamut of available options.

The AIDA64 system report for the hardware configuration provided the following information:

It is interesting to note that the CPU-attached PCIe 4.0 x4 NVMe SSD doesn't come up in the report. However, we did manage to get a pictorial representation of the internal bus structure in relation to the external ports. 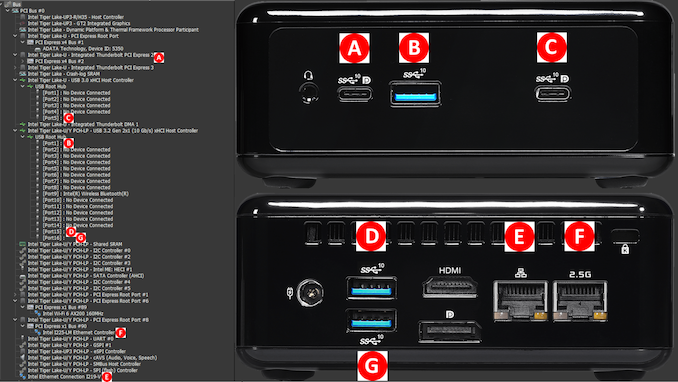 In the annotated screenshot above, we can see the ADATA XPG GAMMIX S50 Lite connected to the PCIe root port (x4 Bus #1) of the TGL-U component of the processor package. Directly beneath it is the first surprise - ASRock Industrial advertises the front Type-C ports as being capable of USB 3.2 Gen 2 (10 Gbps) speeds along with the ability to carry a Display Port signal. Since this Type-C port is directly off the processor, it is capable of obtaining USB4 / Thunderbolt 4 certification (though ASRock Industrial had not processed it when the system was sampled to us). We tried multiple Thunderbolt 3 peripherals attached to the Type-C port to the left of the Type-A port, and all of them worked flawlessly (after installing the Thunderbolt drivers). The other Type-C port in the front panel is also off the TGL-U component, but it is behind a xHCI host controller. This appears to be acting purely in USB4 mode (pending certification), as we were able to get display signals off it, and also operate 10 Gbps portable SSDs at maximum performance. However, Thunderbolt 3-only peripherals refused to power up. The rest of the I/O ports are all off the PCH-LP component, and are bottlenecked by the DMI link between the TGL-U component and the PCH-LP.

Thanks to the B2B focus of the product, ASRock Industrial supplies a detailed block diagram of the NUC-1165G7 motherboard. 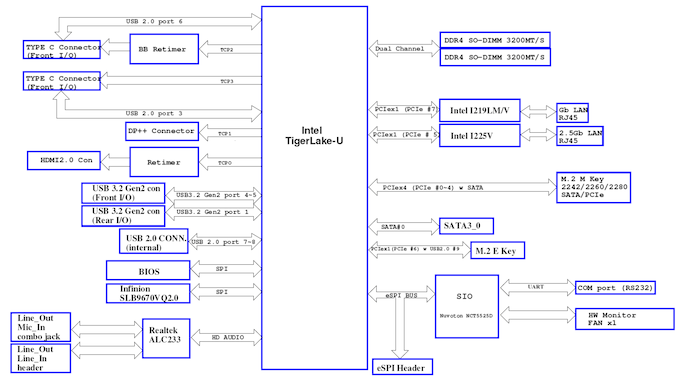 The above layout provides some clues regarding the differences between the two Type-C ports in the front panel. While one of the Type-C ports has a 'BB Retimer', the other doesn't. The insertion of an Intel Burnside Bridge retiming chip between the TGL-U package and the Type-C port enables it to operate as a Thunderbolt 4 port for all practical purposes. The other Type-C port is restricted to USB 3.2 Gen 2 (10 Gbps / Display Port functionality. Given that ASRock Industrial makes no claim of Thunderbolt 4 in its marketing literature, this is pretty much an added bonus for consumers.

In the table below, we have an overview of the various systems that we are comparing the ASRock NUC BOX-1165G7 against. Note that they may not belong to the same market segment. The relevant configuration details of the machines are provided so that readers have an understanding of why some benchmark numbers are skewed for or against the ASRock NUC BOX-1165G7 when we come to those sections.