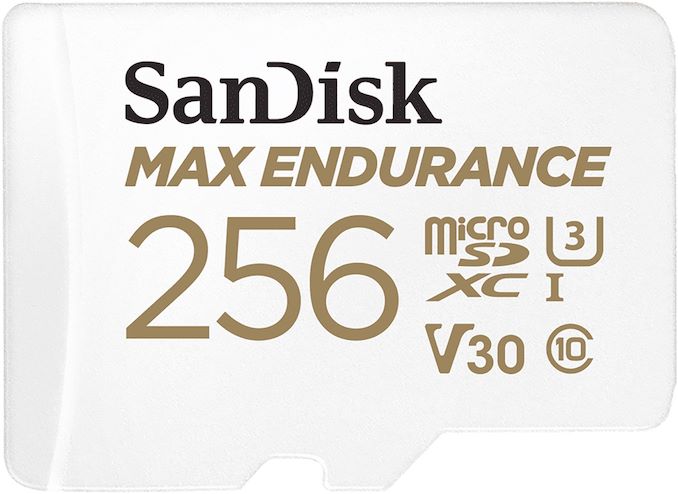 In a world where NAND storage density, capacity, and low cost matter the most, key metrics that take a back seat include endurance and retention rates. For users who want high endurace and retention rates, who want to ensure that their memory cards last for a long time, Western Digital’s SanDisk has recently launched its Max Endurance microSD cards that promise increased endurance, reliability, and are covered with a massive warranty.

The SanDisk Max Endurance lineup of microSD cards includes models featuring a 32 GB, 64 GB, 128 GB, and 256 GB capacity. Western Digital does not indicate which type of 3D NAND memory it uses for these cards or their terabytes-to-be-written (TBW), but it is reasonable to think that these products have some additional NAND flash for overprovisioning and, perhaps, extra controller capabilities.

Sandisk now has the following warranties on its microSD cards:

To maximize longevity of the SanDisk Max Endurance devices, they are waterproof, shockproof, X-ray-proof, and can work an extreme temperature range between -25°C and 85°C (-13°F to 185°F).

As far as performance is concerned, the SanDisk Max Endurance cards use the UHS-I bus and are rated for up to 100 MB/s reads as well as 40 MB/s writes. The cards in the lineup support the Video Speed Class 30 spec, therefore offering at least 30 MB/s sequential write speeds. Also, the products carry the Class 10 and UHS Speed Class 3 logos.

The SanDisk Max Endurance cards are now available directly from Western Digital. The 32 GB model with a three-year warranty costs $12.99, whereas the most advanced 256 GB device with a 15-year warranty is priced at $84.99.