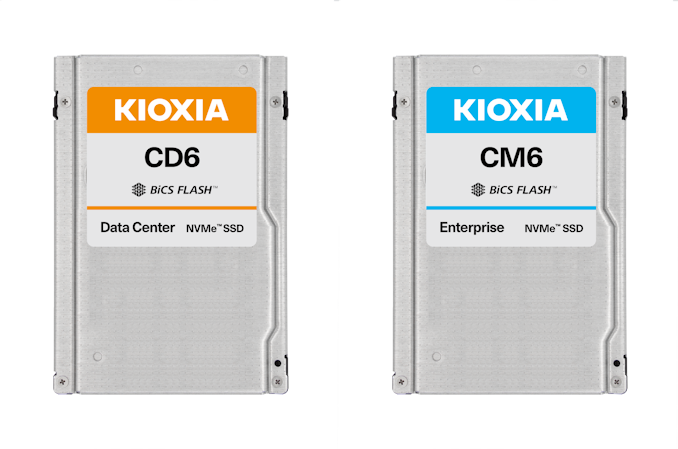 Following through on their roadmap for transitioning to PCIe 4.0, Kioxia (formerly Toshiba Memory) has announced the availability of their first two PCIe 4.0 SSDs. The CD6 and CM6 SSDs target the datacenter and enterprise markets respectively, with a common hardware platform but some differences in configuration, features and performance.

The CD6 and CM6 use a next-generation SSD controller from Kioxia. As with most NVMe controller designs, the switch to PCIe 4.0 has triggered a switch to 16nm FinFET fabrication in order to permit higher performance within the same power limits. The CM6 uses an 18-channel controller while the CD6 gets a slightly cut-down 16-channel version.

Both drives are using Kioxia's 96L 3D TLC NAND, which helps improve performance, especially for write. Both models will feature capacities ranging from 800GB up to 15.36TB, and the CM6 will also be getting a 30.72TB model a bit later. The drives use the 2.5"/15mm U.3 form factor, backwards compatible with U.2 backplanes, but also supporting newer tri-mode SAS/SATA/PCIe backplanes and HBAs. Kioxia believes they are the first to start shipping PCIe 4.0 U.3 drives to customers.

The Kioxia CM6 offers the highest performance and most features. Sequential throughput is rated for up to 6.9 GB/s (reads) and 4.2 GB/s (writes), and random read throughput is up to 1.4M IOPS. Sustained random write performance is up to 170k IOPS on the 1 DWPD version of the CM6 intended for read intensive workloads, and up to 350k IOPS on the 3 DWPD version for more mixed workloads. Features exclusive to the CM6 include support for dual-port PCIe x2+x2 operation, support for up to 64 NVMe namespaces, and support for various sector sizes including Protection Information.

The Kioxia CD6 is the more affordable version, cutting back a bit on controller channels and overprovisioning, and thus also performance. Sequential performance is up to 6.2 GB/s (reads) or 4 GB/s (writes), and random reads at 1M IOPS. The CD6 is the first generation of datacenter NVMe drive from Kioxia/Toshiba to include a 3 DWPD version in addition to the 1 DWPD tier. This means the maximum sustained random write performance from a CD6 is a huge improvement over the CD5, with the 3 DWPD version offering up to 250k IOPS and the 1 DWPD version offering up to 85k IOPS, compared to just 35k IOPS for the fastest CD5. The addition of the 3 DWPD tier is intended to help move some remaining SATA customers over to NVMe even if they are not yet comfortable with dropping down to 1 DWPD.