Shifting gears, let’s talk about the actual hardware that will be hitting retail shelves today. As I mentioned towards the start of the article, AMD isn’t launching an official reference RX 5600 XT, so today’s launch is all about partner cards. To that end, AMD has sampled us with Sapphire’s Pulse RX 5600 XT. Sapphire’s card is a moderately factory overclocked card, and following AMD’s BIOS changes, is apparently a good example of what AMD wants other partner factory overclocked cards to be like.

Editor's Note: These are the specs post-BIOS update. Anyone buying the Pulse in January will want to make sure to update their card with Sapphire’s new BIOSes

Sapphire has several sub-brands of cards, including the Nitro and the Pulse. Normally the Nitro cards are their higher-priced factory overclocked cards, while the Pulse cards are more straightforward. But following AMD’s BIOS changes, that seems to have at least partially gone out the window. In any case, even with its factory overclock the Sapphire Pulse RX 5600 XT is not being positioned as a high-end card among RX 5600 XTs; at $289, it carries just a $10 premium over AMD’s MSRP. 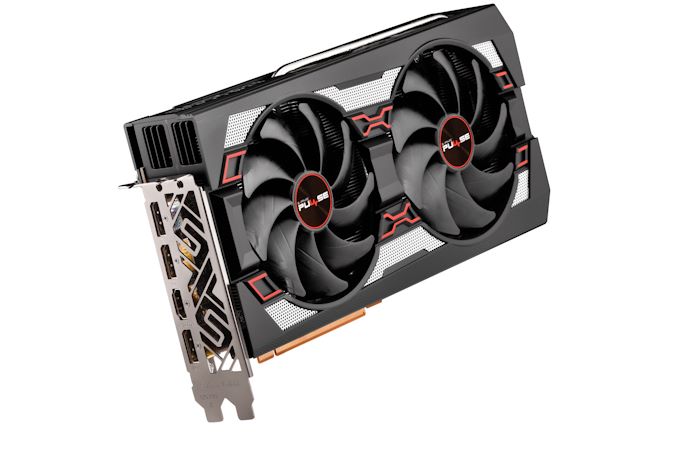 For their Pulse RX 5600 XT cards, Sapphire has opted to factory overclock both modes for the card. The card’s default mode, which is its performance mode, ships with a ~180W TBP. This affords a rather sizable 240MHz (17%) increase in the card’s rated game clock. Meanwhile the memory clock has been increased by 2Gbps (17%) to 14Gbps. In short, in performance mode the Pulse is noticeably more powerful (and power-hungry) than a baseline RX 5600 XT.

On the flip side of the coin is the card’s quiet mode BIOS. This BIOS uses settings much closer to AMD’s own reference specs, with the 150W TBP and 12Gbps matching AMD’s. The only change here is that the card gets a milder 85MHz (6%) factory overclock, as far as the game clock is concerned.

Digging into the card, it’s clear from the start that Sapphire has overbuilt the card, particularly for cooling performance. At 10-inches long the card isn’t especially lengthy, but Sapphire makes up for that with a 2.3-slot wide cooler design and significantly taller (5.3-inch) frame. Comparing it to NVIDIA’s relatively compact dual-fan GeForce RTX 2060 Founders Edition, the Sapphire Pulse RX 5660 XT has about 50% more volume. Which, along with making the card a bit of a pain to install, affords it a lot more volume for heatsinks and fans.

The payoff for this oversized design is that Sapphire can use larger, lower RPM fans to minimize the fan noise. The Pulse 5600 XT packs 2 95mm fans, which in our testing never got past 1150 RPM. And even then, the card supports zero fan speed idle, so the fans aren’t even on until the card is running a real workload and starts warming up. The net result is that the already very quiet card is completely silent when it’s idling. 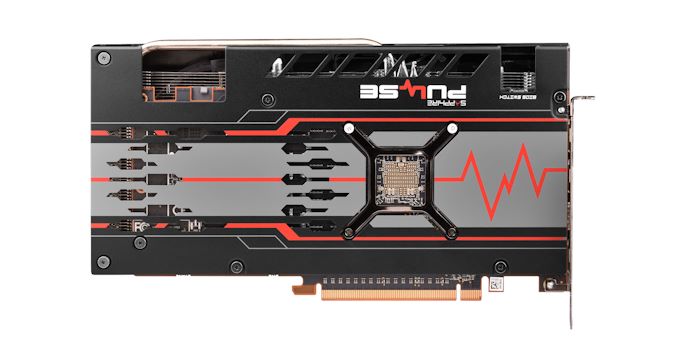 Meanwhile beneath the fans is a similarly oversized heatsink, which runs basically the entire length and most of the height of the board. A trio of heatpipes runs from the core to various points on the heatsink, helping to draw heat away from the GPU and thermal pad-attached GDDR6 memory. The fins are arranged horizontally, so the card tends to push air out via its I/O bracket as well as towards the front of a system. The card also comes with a metal backplate – no doubt needed to hold the oversized cooler together – with some venting that allows air to flow through the heatsink and out the back of the card.

Feeding the beast is an 8-pin external PCIe power cable, as well as PCIe slot power for its electricity needs. From a practical perspective this is well-provisioned for a card that will hit 180W, and with the design presumably being recycled from a 5700 series design, there’s room for a second power connector if Sapphire ever needed it. 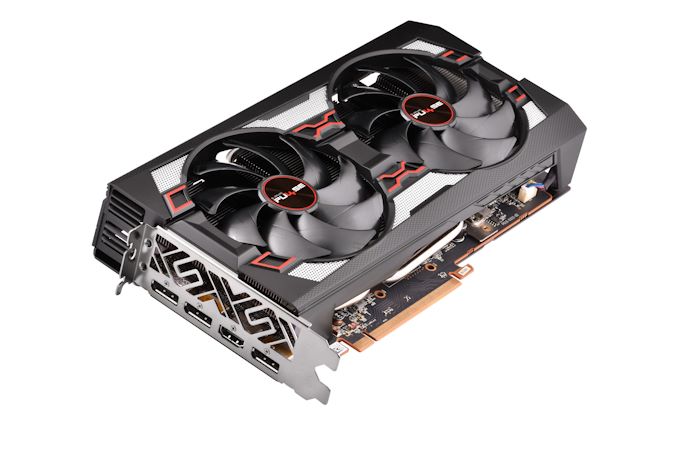 Finally for hardware features, for display I/O we’re looking at a pretty typical quad port setup. Sapphire has equipped the card with 3x DisplayPort 1.4 outputs, as well as an HDMI 2.0b output. With daisy chaining or MST splitters, it’s possible to drive up to 6 monitors from the card.