One of our key conclusions from our Ryzen 9 3950X review is that AMD’s TDP number on the box was now somewhat a blurred line, with the processor instead taking the ‘Package Power Tracking’ or PPT value as its true peak power consumption. This meant that for a processor to have 105 W TDP on the box, the default PPT of 142 W meant that we saw power consumption around 142 W rather than 105 W. One concern going into this review is that AMD would take a similar line with the Zen 2-based Threadripper parts as well.

Both of the TR 3960X and TR 3970X processors have a list box TDP of 280 W, which is a new ‘record’ for high power consumption in a consumer CPU. In the enterprise space we see some specialist processors break the 400W mark, but those CPUs exist in environments with a variety of cooling methods and sound isn’t much of a concern. Conversely, these AMD processors will have to live in a box under someone’s desk, so there has to be a point where the TDP is too much. Last AMD generation was 250W, this one is 280W: if we’re not there already, then this should be a practical limit. AMD of course recommends liquid cooling with a good pump and a big radiator, so anyone buying one of these processors should look into spending at least another $120+ on a good liquid cooling system. 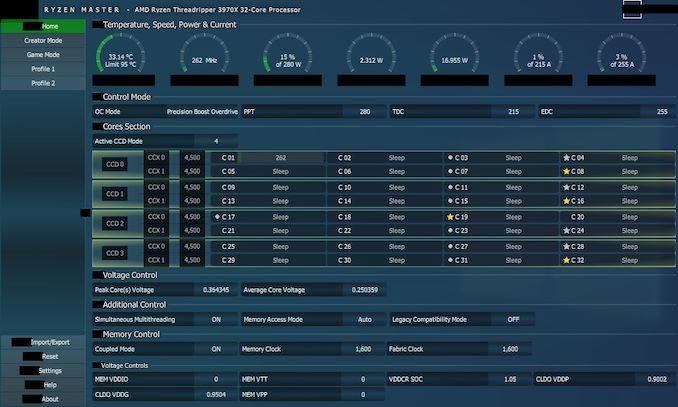 For our power consumption metrics, we performed our usual testing: using an affinity mask to limit the cores in use, implement a high-powered workload, and then measure the power readings 30 seconds in. We take the power readings from the processor itself, using the internal registers that are designed to regulate how much the processor does a form of turbo but also regulate temperatures and so forth. This method is broadly accurate, assuming the motherboard supports the external reporting of these values, but depending on the processor family it also gives us insights into how much power is being derived from the cores individually and the package as a whole. 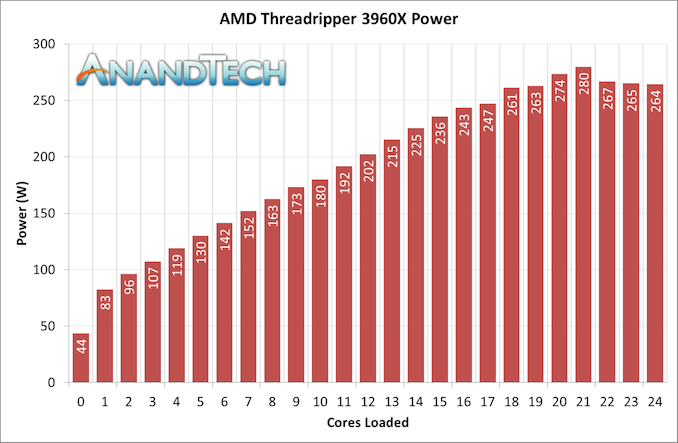 From the peak power perspective, we hit 280 W with 22 cores loaded. It drops off a bit after that, like we saw with the Ryzen 9 3950X, but not by much at this time. It should be noted that as we reach these higher values, out of those 280 W, around 205 W is being used by the cores, while 75 W or so is for everything else: that means memory controllers, PCIe root complexes, and the infinity fabric. This 75 W value doesn’t vary that much, starting at 68 W even at single core load. This indicates that either IF doesn’t take much power as more cores are used, or it is on all the time.

Moving to the 3970X, and we see a similar picture:

With more cores, the power is spread around a lot more. One core loaded tops out at 13 watts, and at 11 cores loaded we can still manage above 10 watts per core. When fully loaded, we move down to as low as 3 W per core, but it does average out to around 6 watts per core. Checking the frequency at this loading and despite the 3.7 GHz base frequency, we actually have all the cores at 4.0 GHz. 32 cores at 4.0 GHz? Yes please. 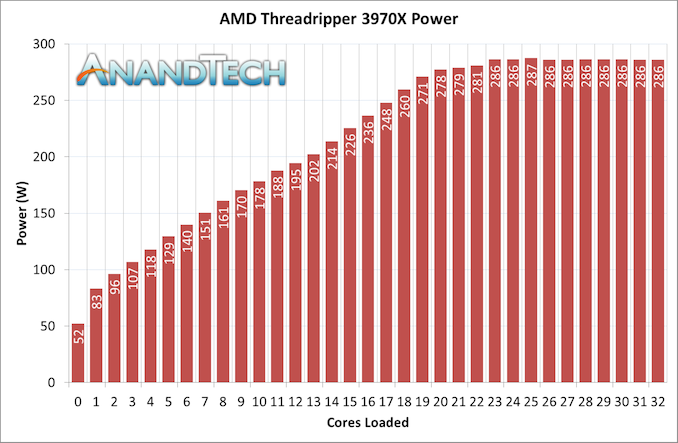 The peak power metrics rise to just over 280 W when we hit 23 cores loaded and stay there, with no dip after hitting the peak. It would seem that the 3970X appears better built in that regard.

If we comment on the power between the cores and everything else, we again get a 205-210 W value for the power in the cores. This leaves 75 W or so for the rest of the chip, almost identical to the 3960X, and again this doesn’t waver much from 1 core loaded to all-cores loaded.

What will be interesting to see will be when we get the 3990X in to test as comparison. I expect that 75W value to go up – even if it goes to 100W, that leaves 180W for 64 cores, or around 3 W per core. Based on my estimates, we could be looking at anywhere from 3.0-3.5 GHz per core, which actually fits in nicely with the frequencies of the EPYC 7H12 which is also a 64-core 280W part, but for the high performance compute market.

When comparing peak power consumption to all the other CPUs in our review, as expected our new CPUs are near the top of the charts. 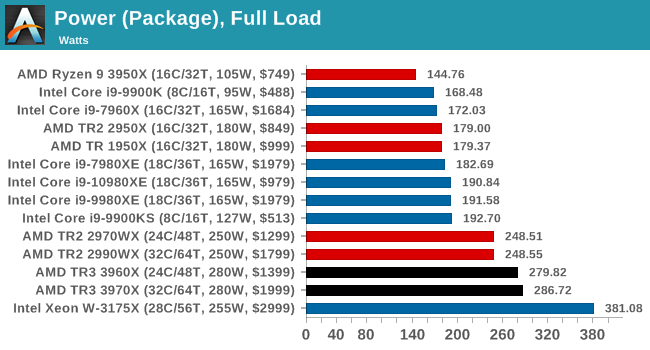 Only the unlocked 28-core from Intel peaks at a higher power, but funnily enough, that should only have a 255W TDP. So for four more cores, AMD’s peak power is still 100W below Intel’s. That’s the ‘power’ of the 7nm process node and some good quality chiplets.