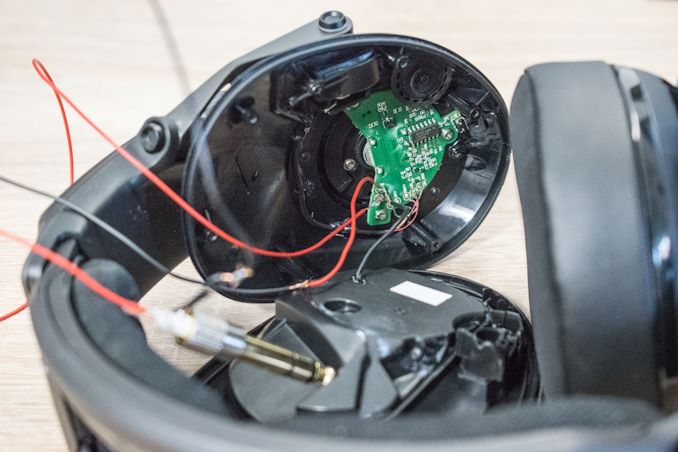 To investigate the audio quality issues more in depth and to verify that it’s not just some side-effect of my measurement rig, I went ahead and dismantled the headphones and soldered in measurement cables into the speaker’s inputs so we can actually also measure the electrical audio signal from the DAC.

I limited my measurement to one channel on the right speaker for practical reasons, as anyhow the key measurements and characteristics we saw are present on both channels. 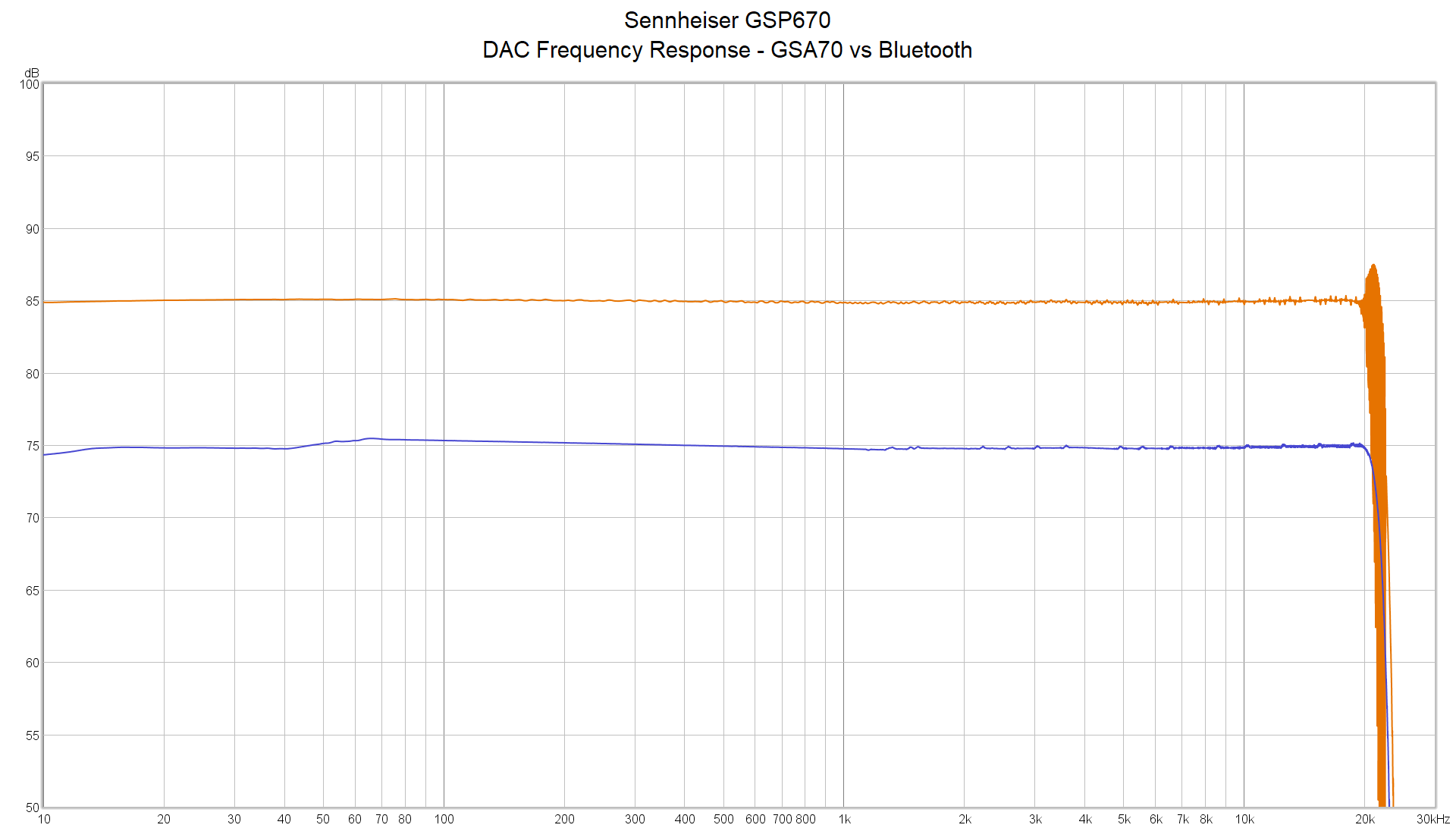 The frequency response of the signal coming out of the DAC and powering the speakers is pretty much flat for both transmission methods, however we do see some larger deviations on the GSA70 connections in the bass range, and of course we now confirm that the massive distortions on the Bluetooth connection past the 20KHz mark are part of the signal from the DAC.

When zooming in, we also see smaller artefacts and they’re quite different between the two connections. 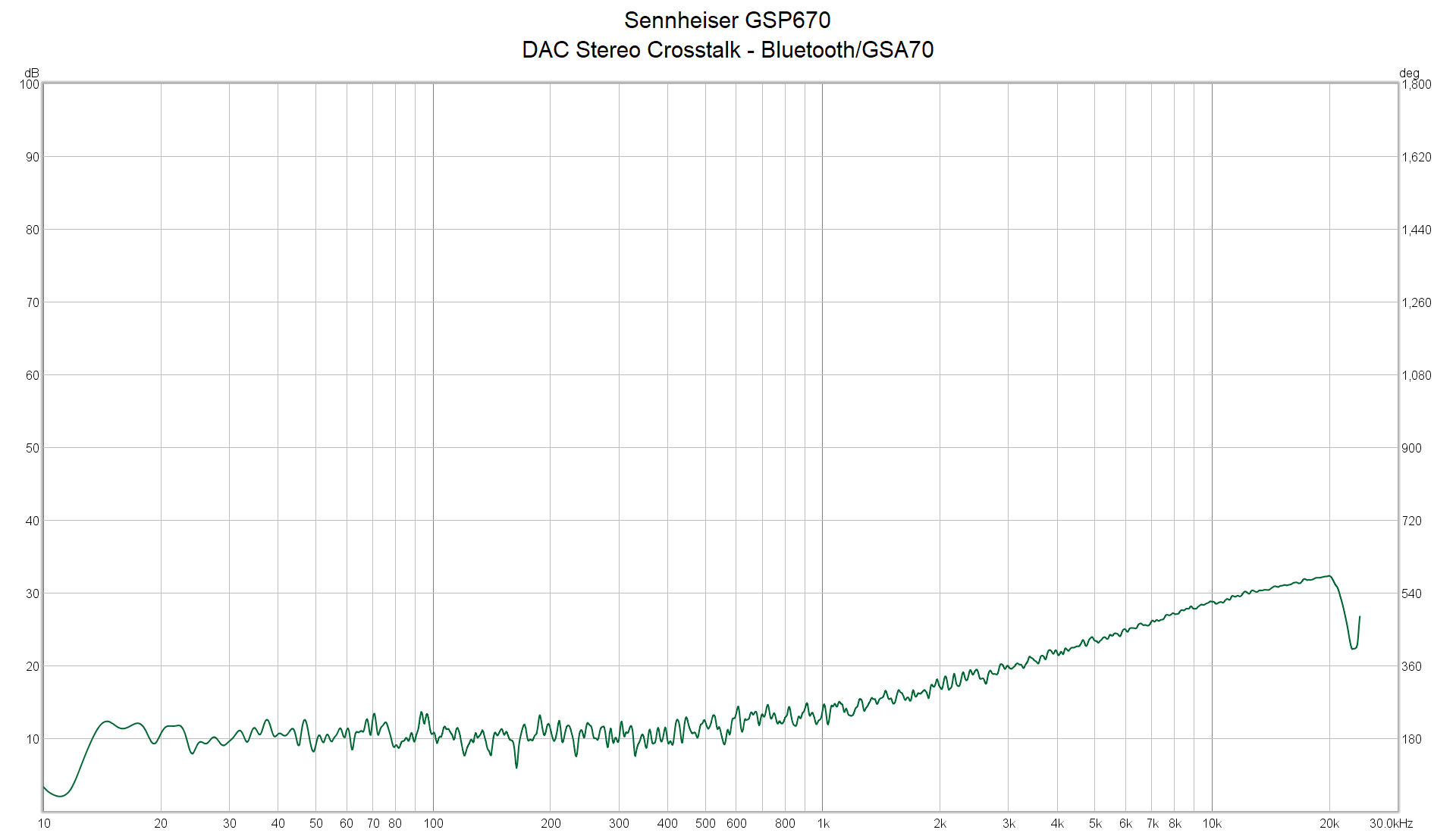 I took the opportunity to measure stereo cross-talk, and indeed we’re seeing a relatively standard FR response curve when measuring the R channel while playing back on the L channel. 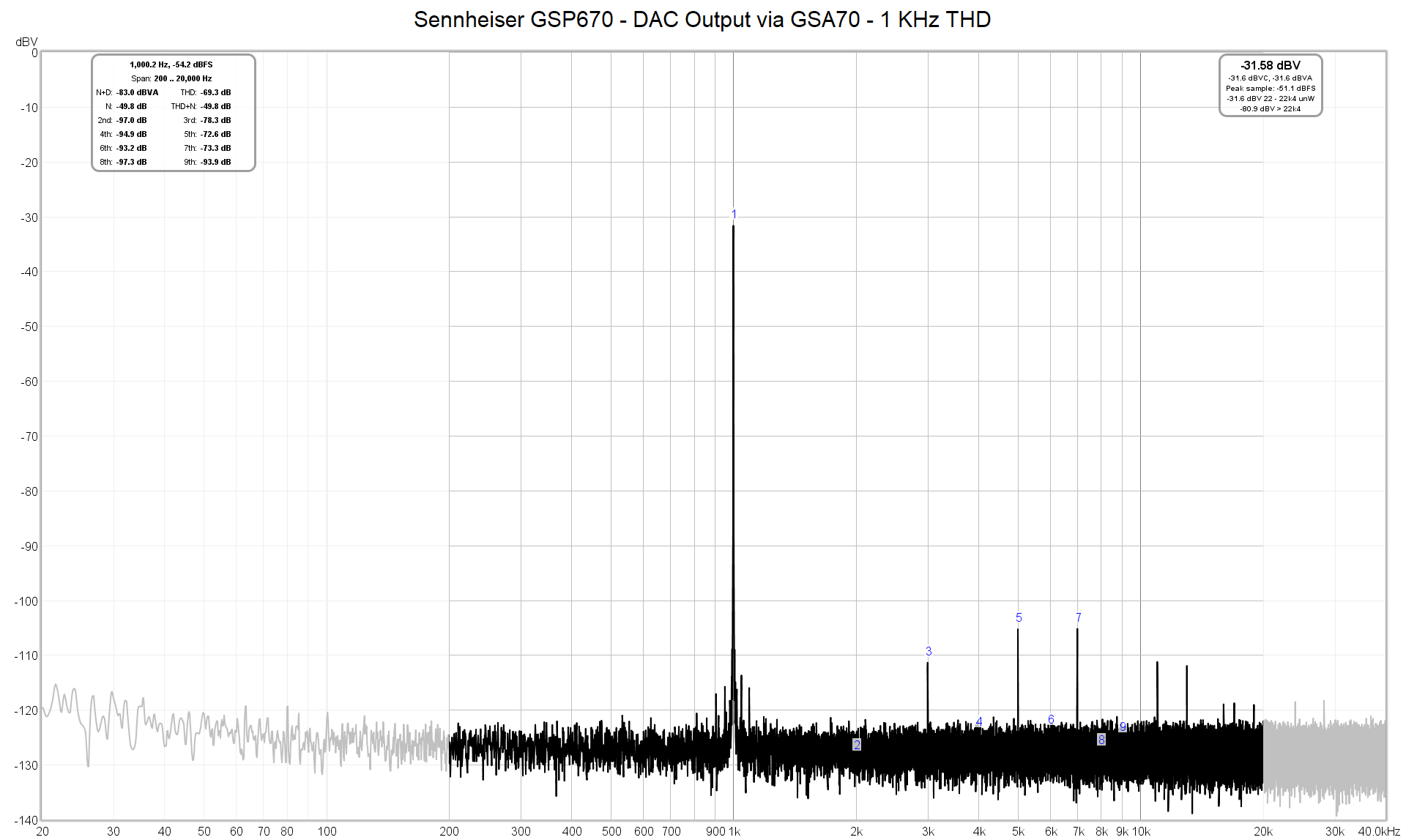 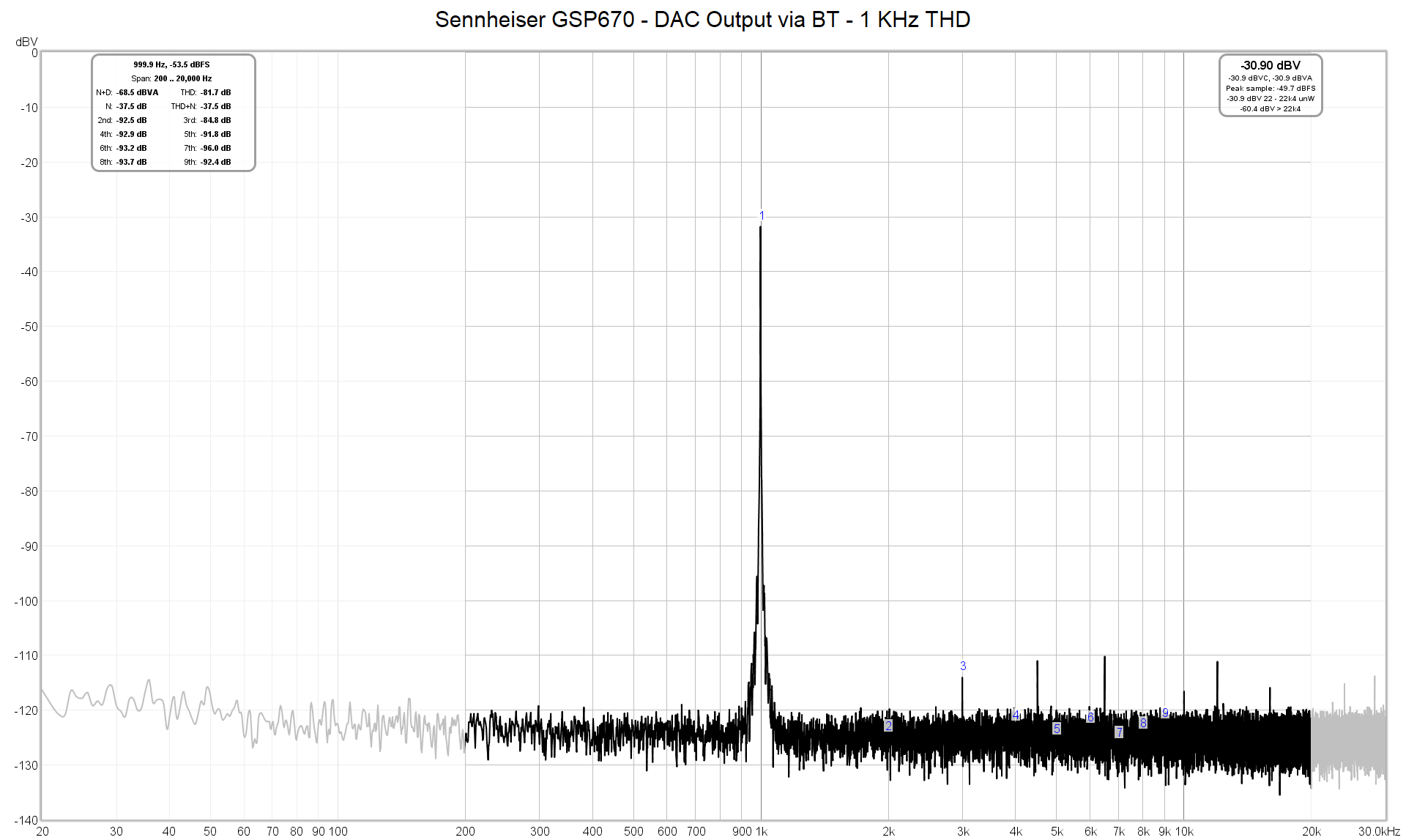 Please note that for the electrical measurements I attempted to adjust the output voltage (calibrated via external multimeter, dBV values are accurate) to get as close as possible to each other, to definitely rule out that distortion on the GSA70 isn’t simply because of its higher volume.

Again here we see the same oddity as on the speaker measurements that the Bluetooth connection is seemingly shifting down the higher harmonics by 500Hz – and again, that’s simply my interpretation of the behaviour when looking at the peaks. But even when taking this into account, overall distortion on the GSA70 is still higher. 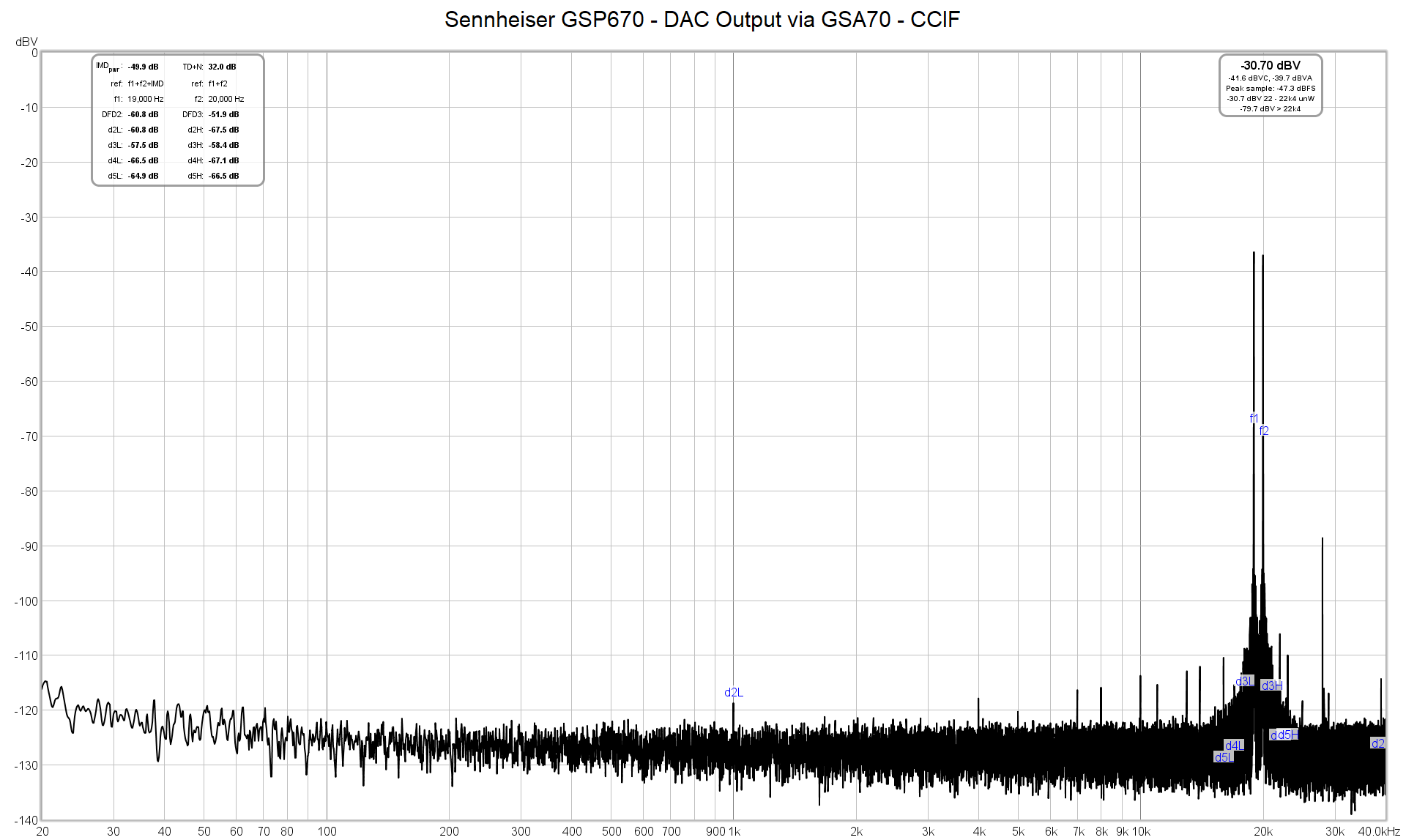 I had made all measurements while calibrating the output voltage to the 1KHz signal test, so again it’s interesting to see that for the Bluetooth measurement here again it went quite further down in amplitude for the higher frequency fundamentals.

There’s notable distortion above 20KHz and this was confirmed by what we saw in the FR curve. On the GSA70 this time around we again see a ton of distortion elements in the lower frequencies, showcasing some worse off results. 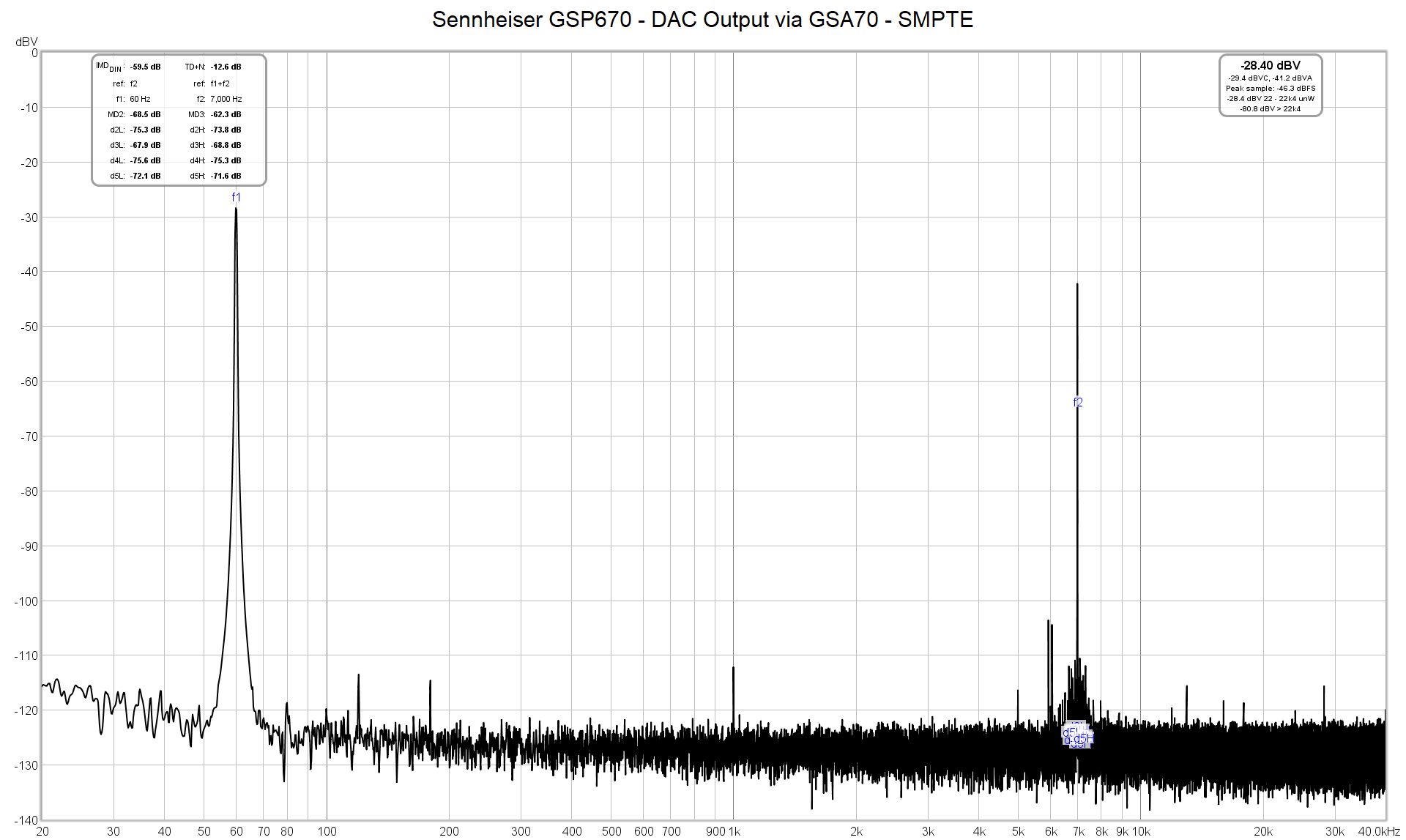 In the SMPTE test notice how the 60Hz peak doesn’t change all that much in amplitude compared between the two connections as opposed to the much lower 7KHz tone in the BT measurement. Distortions on BT oddly enough again are lower frequency, but also lower than on the GSA70. 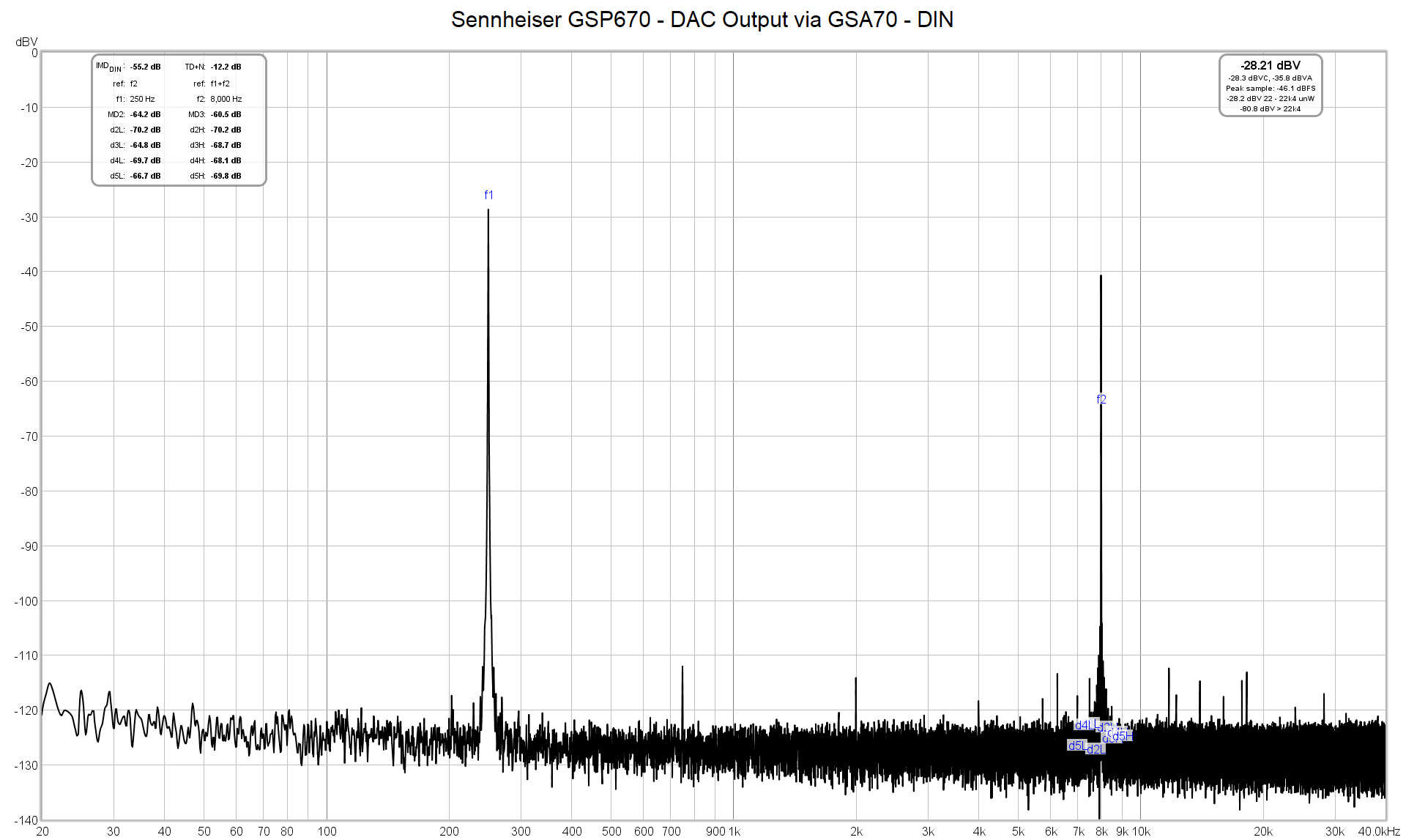 On the DIN test we again see a similar patterns – lower higher frequency volume on the BT test, but also lower distortions.

Overall, I’m not too sure what to make of the GSP670’s audio performance. On one hand, the actual speakers as well as drivers seem to be very high quality and it seems that in that regard they’re very much typical of Sennheisers within this price-range.

However, the core issue of the headphones is that they seemingly fail when it comes to the actual electrical signal output as well as the DAC quality of the CSR8670 ASoC that the company opted to use for powering these headphones.

My two main gripes are the headphone’s idle noise behaviour as well as the too high distortions on the GSA70 which are very much noticeable in every-day listening. Both these issues fundamentally are characteristics of a too weak DAC – the 16bit resolution of the unit just doesn’t cut it as it doesn’t have enough headroom to drive down the noise floor below audible levels.

The inter-modulation behaviour and differences between the GSA70 and Bluetooth are also hard to explain. Both behaved off the mark, but in the end the Bluetooth output did however give a much better sound experience.