EVGA currently sells a range of products: motherboards, graphics cards, power supplies, cases, and laptops. EVGA has been expanding to other markets for a number of years now, and at CES 2016 we saw the beginnings of a USB audio device due to a collaboration with a professional company called Audio Note. We were impressed at the time, but since then we've not heard much about the project, and had kind of assumed it had been abandoned. But at CES 2019 EVGA introduced the results of the collaboration: its first audio card. This card uses a PCIe to USB controller, making it an internal USB audio product.

EVGA’s Nu Audio card was designed by Audio Note, a UK-based company that develops custom audio solutions. The PCIe 2.0 x1 card implements a PCIe to USB controller to the hardware, and is based on the XMOS xCORE-200 DSP accompanied by Asahi Kasei Microdevices’ (AKM) AK4493 DAC, the AKM AK5572 ADC, and the Cirrus Logic CS5346 ADC. The board uses a silver and gold-plated multilayer PCB with isolated dual ground planes for analogue and digital circuits. Being aimed at users who want a cleaner sound but also better sound support out of their audio outputs, the Nu Audio card uses audio-grade capacitors and resistors that carry Audio Note, Nichicon, WIMA, and Panasonic brands. Besides, it features switchable OP amps as well as a dedicated Maxim amp for headphone volume control.

The Nu Audio card is equipped with two RCA line outs for left and right speakers that can output 384 KHz at 32-bit audio, one output for headphones featuring impedance between 16 and 600 Ohms, an S/PDIF out, a line in supporting 384 KHz at 32-bit audio, and a mic in supporting 192 KHz at 24-bit audio. In addition to traditional analogue and digital outputs, the card supports USB audio class 2.0 enabled by the ASMedia ASM1042 PCIe-to-USB bridge. Meanwhile, to ensure that the board gets enough power, it has a SATA power connector coupled with a multi-stage VRM.

Since EVGA usually targets enthusiasts, its audio card is not only outfitted with a cooling system for heating components, but it is covered by a shroud featuring 10-mode RGB lighting as well as four Audio Reactive Lighting options that match the board’s lighting and audio. The bundled software allows for full EQ tuning, as well as a dynamic response implementation. With the right software, the audio card can support full audiophile formats, such as DSD, and switch between them as required.

EVGA is now currently selling the card, at a price of $249. This is the first in a line of cards, we were told - depending on the feedback of the hardware, the collaboration with Audio Note might extend into a gaming focused design or a more professional audio input/output design. 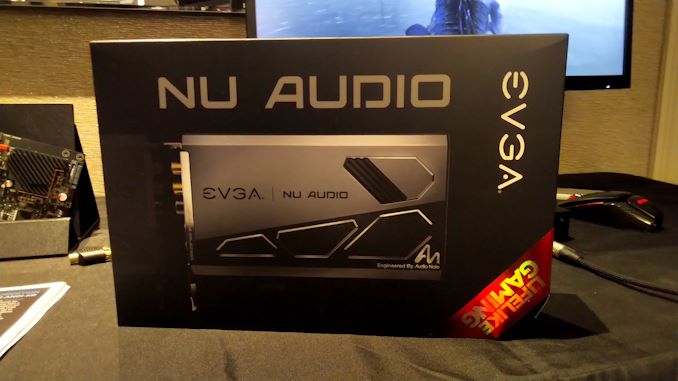