Overall, our testing is similar to the results found back in our Ryzen 7 memory scaling piece back in September of last year, though the added element of the Vega integrated graphics did make things interesting. The Ryzen APUs both feature Zen compute cores based on the exact same architecture as the other Ryzen first generation processors, including the same Infinity Fabric (IF) scalable interconnect. The IF speed is directly influenced by the main memory speed, so any increase in memory speed is a mutually beneficial element to both the memory and the IF, with the aim of increasing both the overall compute performance and the graphical side. Graphics is always a memory bandwidth hog, so anything that can be done to improve memory speed helps.

Overall, going for faster memory (or even overclocking it) has scored some obvious results. Gaming at 1080p on the integrated graphics has considerable gains, and using a GTX 1060 at 1080p as well saw most games get a sizeable boost.  The CPU benchmarks were a little hit and miss, depending on if memory was the bottleneck, meaning only WinRAR and DigiCortex saw big gains.

In our roundup analysis, we are taking two different sets of data. First is the top to bottom performance difference: how much of a gain is obtained from getting the best memory configuration we tested, DDR4-3466, compared to a 'stock' DDR4-2133. This is where the biggest numbers happen, and where the biggest monetary difference is expected.

The second set of data is perhaps more relevant: comparing our best memory configuration to what AMD has as its 'maximum supported frequency' for memory. Nominally this value is what AMD will guarantee in memory performance - users are allowed to go beyond this, but AMD doesn't guarantee that the memory controller will do so. For our APUs, that official value is DDR4-2933 for single sided memory and one memory stick per channel (1 DPC), or DDR4-2667 for double sided memory at 1DPC, DDR4-2667 for single-sided memory and 2DPC, and DDR4-2400 for double sided at 2DPC. In this case we take the frequent scenario, DDR4-2667. Technically AMD supports this at JEDEC sub-timings, which depending on what you read is listed as from CL15 to CL19; we believe it is actually CL19. However for our results, we are taking the 17-18-18 timings that were used.

For raw compute, the biggest gain came through DigiCortex which does rely heavily on memory, more than most of the other tests in our suite; this is no surprise that the increase from DDR4-2133 to DDR4-3466 equated to a 22% jump in performance on both the Ryzen 5 2400G and Ryzen 3 2200G. The increase in memory frequency also proved fruitful in our WinRAR compression tests which showed a consistent decrease in compression times through each of the different straps. Performance in the heavier computational benchmarks such as POV-Ray and 3DPM failed to show benefit in choosing faster memory over DDR4-2133 in those particular workloads. 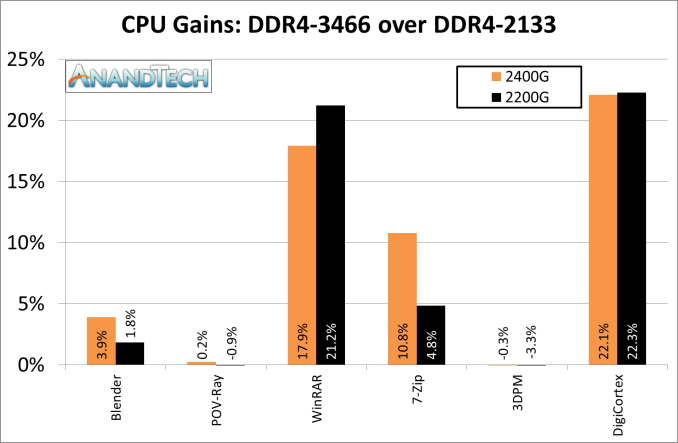 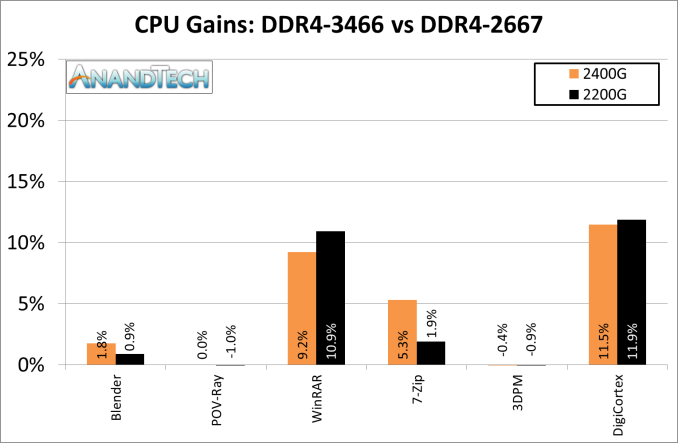 Looking specifically at the results going from DDR4-2667 to DDR4-3466, the increase from DDR4-2133 to DDR4-3466 is essentially halved, with absolutely no advantage in our testing in 3DPM and Pov-Ray. Even in Blender, the very small increase our results displayed with the Ryzen 5 2400G doesn’t justify the extra expense in cost, not by a long stretch. Performance in memory favored applications however remains the obvious choice to select faster memory frequency, where DDR4-3466 shaved 7-10 seconds off Blender for both APUs. The longer and more arduous tasks show a nice benefit of between 9% and 10% which in a scenario where you’re doing lots of compressions, this equates to around 6 minutes per hour saved.

The Ryzen APUs are primarily marketed towards gamers on a budget and this is where the majority of the benefits of memory frequency become apparent. Jumping from DDR4-2133 to DDR4-3466 made a consistent impact on performance across our chosen test games, with Total War: WARHAMMER 2 exhibiting the least benefit; however, there was still an increase in performance from top to bottom. The biggest gains achieved with both the Ryzen APUs came in Rise of The Tomb Raider which saw an increase of more than 30% in average frame rates, with the SMT’less Ryzen 3 2200G ($99) managing a still notable 23% jump in performance. 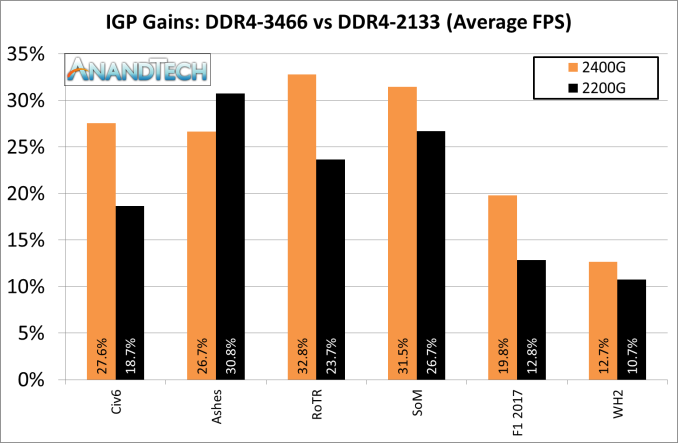 The gains were somewhat muted when we go above the recommended frequency for the APUs. The better games saw an 8-14% gain in average frame rates from DDR4-2667 to DDR4-3466, while F1 and WH2 saw 5% for each APU. 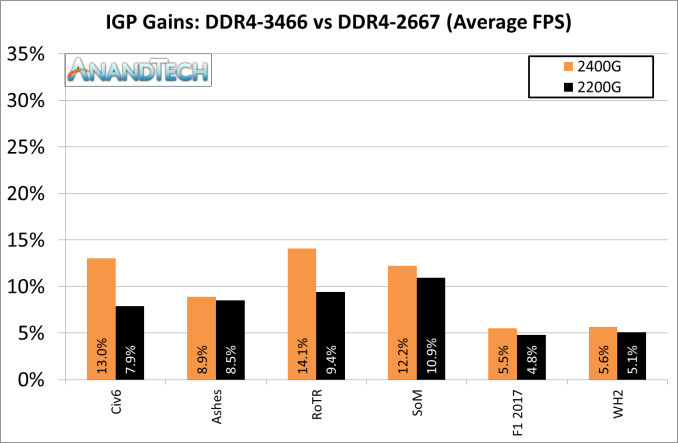 At this point there were limited returns for performance.

The 99th percentile performance while gaming on the Vega-based iGPU produced a phenomenal increase in performance from DDR4-2133 to DDR4-3466 in Rise of The Tomb Raider on the 2400G with a staggering 50% increase. What’s interesting is the lower spec 2200G only managed to attain an 18% increase which is primarily due to having three fewer Vega cores and a lower iGPU frequency. 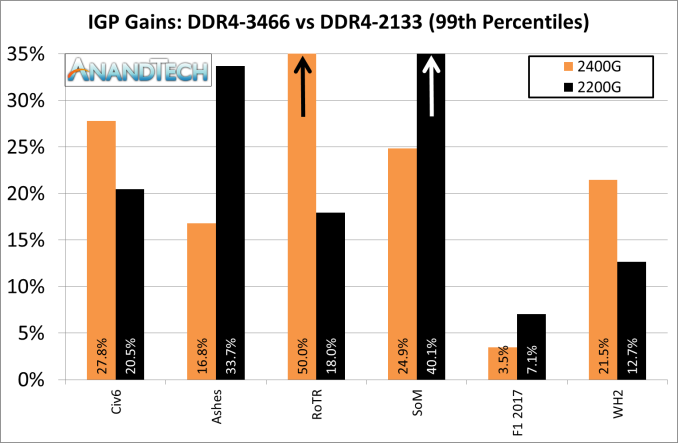 The rest of the games on test displayed consistent results with a couple of percentiles shooting up on the 2200G over the 2400G.

Going from the more middle of the road DDR4-2667 to DDR4-3466 did show a noticeable jump in performance on the whole in our 99th percentile frame rates. 2017 actually dropping in performance by 6% in F1 2017 on the Ryzen 5 2400G, but somehow gained 6% going up to DDR4-3466 on the Ryzen 3 2200G. While I did numerous re-tests, the numbers outputted didn’t lie and I would put it more so down to an anomaly in the 99th percentile results at DDR4-3466; even adding more voltage to the memory made no difference at DDR4-3466 in this case and the memory was 100% stable through stability testing. 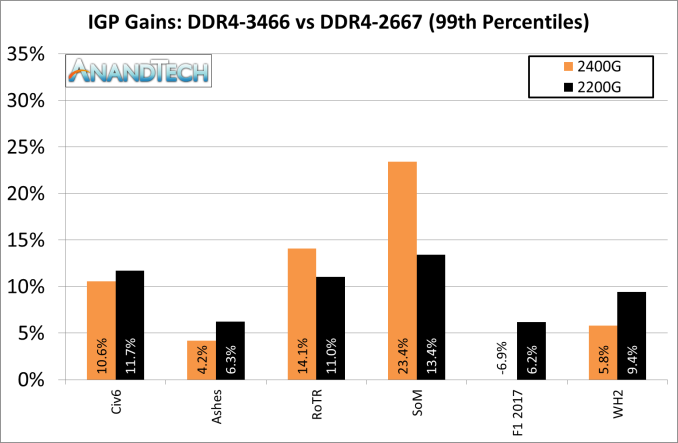 For percentile gains, there is still a good 10% gain or so depedning on the title in question, though it might be questionable if it is worth the cost.

Focusing on the results with a discrete graphics card, in our case an ASUS ROG GTX 1060 STRIX, the jump in memory frequency from the lowest tested to the highest proved that although there are extra average frames to be squeezed out in half of the titles we tested, it doesn’t exactly justify the extra cost with the inflated DDR4 pricing in the others. 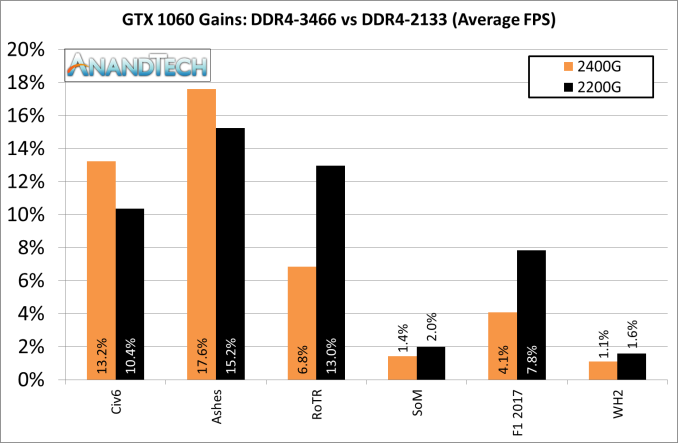 It primarily comes down to what games are played and whether they are optimized to make use of memory, or if the worst memory is simply the worst performance and the performance curve is simply another step above. The biggest gains came in Ashes of The Singularity which is a cornerstone title for DirectX 12 gameplay, whereas Civilization VI came in not too far behind with the Ryzen 5 2400G gaining 13%, with the Ryzen 3 2200G hitting a modest 10% increase in average frame rates. 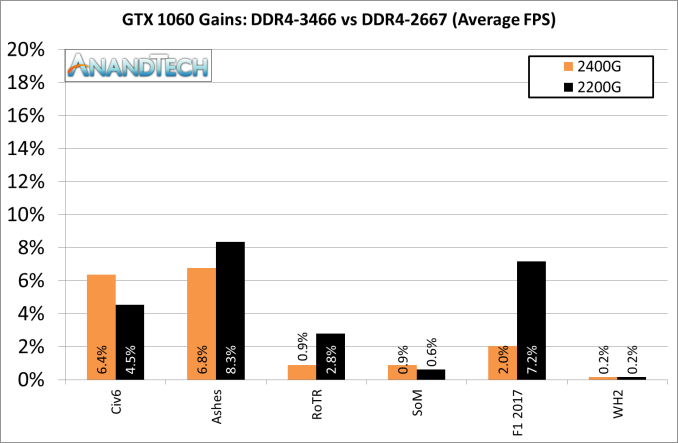 The gains from selecting DDR4-3466 over become less apparent over DDR4-2667 with the most noticeable improvements coming in Civilization VI and Ashes of The Singularity.

Percentile Performance when using the GTX 1060 gave Rise of the Tomb Raider a hefty jump from DDR4-2133 to DDR4-3466; other titles with a distinct increase includes Civilization VI and Ashes of The Singularity. As expected and consistently non-momentous is Total War: WARHAMMER 2 which shows that memory performance makes little difference to the Warscape engine that both WARHAMMER based Total War games are developed upon. 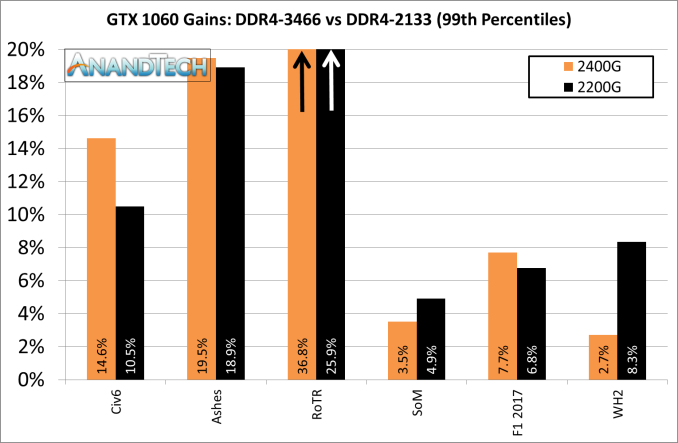 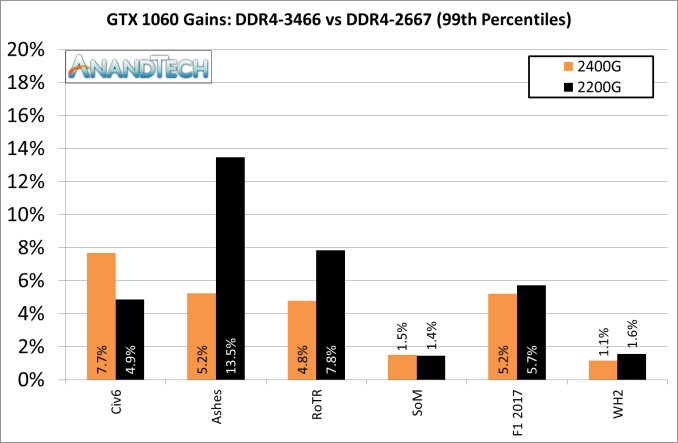 But when actually going above the maximum supported frequency, while there are some gains across the board, most of them are minor with only a few going above 5% and it is very title dependent. Ashes of the Singularity with the Ryzen 3 2200G looks better, and F1 2017’s results actually showed stability with a discrete GPU this time around, with a modest increase in performance. Shadow of Mordor and Warhammer 2 were relatively unaffected.

Our recent dive into Core Frequency Scaling with the Ryzen 5 2400G and Ryzen 3 2200G showed that in compute heavy tasks, an increase in the CPU core frequency yielded the best gains. In the case of memory frequency on the APUs, while memory frequency does have some effect on compute related performance, the bread and butter of the gains come through gaming performance, more specifically, gaming on the integrated graphics.

In our testing up to DDR4-3466, the clear message to take away from the testing is that gamers are ones most likely to gain anything from going for a faster kit of DDR4 memory, as well as users using memory heavy applications such as compression related tasks such as WinRAR. However, price for performance is always a critical point here, with memory kits rising in value almost 4x since mid-2016. 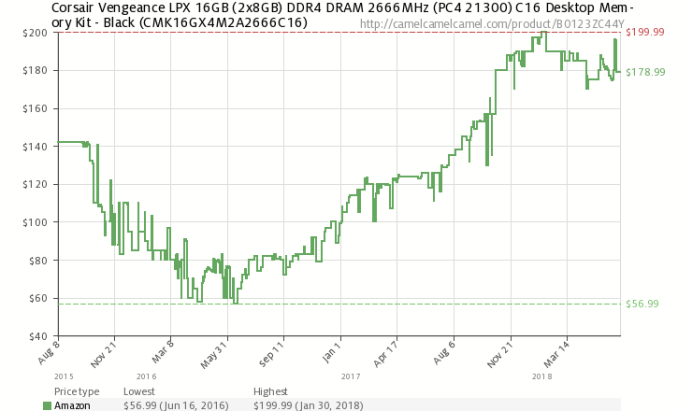 With the price of DDR4 memory still being somewhat unreliable and looking like continuing its current trend throughout 2018, picking the best memory for the task within the right budget seems more important than ever.

Pairing up one of the Ryzen 3 2200G or Ryzen 5 2400G APUs with say a kit of G. Skill Ripjaws V 16 GB (2 x 8 GB) DDR4-3000 memory which costs around $190 from Amazon US would offer better performance than a DDR4-2400 16 GB kit which still commands a hefty price after the hike of $150; however the financial hit primarily depends on your preferred memory brand of choice. 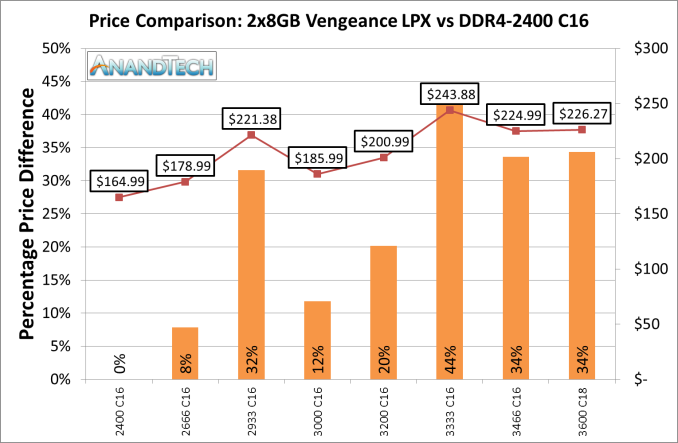 Touching specifically onto the pricing of DDR4, I selected a popular memory kit range from the general market, the Corsair Vengeance LPX 16 GB (2 x 8 GB) at CL16 in black and tallied up the variation in prices and percentiles. Aside from that odd DDR4-2933 price, it would seem that the kit to enter in should be around DDR4-3000 C16. For an extra 12%, users get most of the benefits from a bargain basement DDR4-2133 kit, without splurging another $20-40 on some potential gains. Users looking to splash out would be advised to look at the memory kits on offer, and see where the sweet spot for pricing is for their chosen brand.

While the above does show a clear and gradual price rise from around the end of 2016 in regards to DDR4 memory pricing, the market currently shows little sign of stabilizing. These markets sometimes go in circles, and news about DRAM manufacturers offices in China being raided, along with two new Chinese DRAM fabs opening soon, put a lot of uncertainty in the market.

The takeaway message has to be that the Vega graphics cores embedded into both of the current Ryzen APUs chips do benefit from the faster memory, with discrete graphics taking a nice and consistent improvement across the board too. The performance in compute related tasks generated little to no effect with faster memory frequency unless the benchmark was already memory limited (as shown by CPU overclocking having little to no effect).