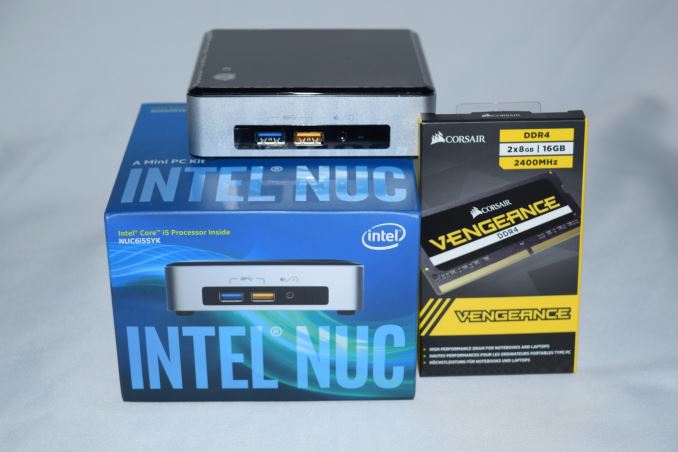 The evolution of computing platforms has left the traditional desktop PC market in a precarious state. However, the miniaturization trend has provided some bright spots. Compact PCs have been around in the mini-ITX form factor for a relatively long time now. The market segment received a massive boost with the introduction of the ultra-compact form factor (UCFF) machines. It all started with the first Intel NUC (Next Unit of Computing) based on a Sandy Bridge processor. Every generation since Sandy Bridge has seen multiple NUCs based on the corresponding U-series processors, and Skylake is no different.

It is not difficult to identify reasons for the popularity of UCFF PCs and Compute Sticks - performance per watt has seen considerable improvement, and much of the average consumer's traditional desktop work can be done with systems sporting a sub-20W TDP CPU. SSDs are becoming smaller and smaller, first with mSATA and now with M.2 form factors. High speed interfaces such as USB 3.0 have also become ubiquitous, removing the need for dedicating storage space inside the chassis for fast access to large amounts of data. The advent of mobile platforms have also made casual gaming quite popular - and power-hungry discrete GPUs are not needed for those. All these trends have enabled powerful palm-sized computers - the Next Unit of Computing.

Intel has been pushing the performance per watt aspect and GPU performance heavily in the last few generations, making each successive NUC generation more attractive than the one before. We have already looked at multiple Broadwell NUCs. The Skylake NUCs currently come in two varieities - one based on the Core i3-6100U and another based on the Core i5-6260U. The i5 version is marketed with the Iris tag, as it sports Intel Iris Graphics 540 with 64MB of eDRAM.

The NUCs have traditionally been barebones machines - the end-user could choose appropriate storage media for the OS, a mini-PCIe WLAN adapter, SODIMMs and an operating system. Starting with the Broadwell NUCs, Intel introduced some changes in the barebones approach. Only M.2 SSDs are supported (though, select models with the 'H' tag allowed for 2.5" drives). In particular, even though the Broadwell NUCs supported both SATA-based and PCIe-based M.2 SSDs, the PCIe links were only PCIe 2.0 x4. That changes in the Skylake NUCs with full support for PCIe 3.0 x4 M.2 SSDs. While the Broadwell NUCs came with the Intel AC7265 WLAN adapter soldered, the Skylake NUCs come with the Intel AC8260 adapter soldered to the motherboard.

The specifications of our Intel NUC6i5SYK review configuration are summarized in the table below. We used the same Samsung SM951 NVMe drive that Intel supplied with our review sample of the Broadwell-U Iris NUC. The Skylake NUCs are the first UCFF PCs to move to DDR4 for the SODIMMs. Corsair provided us with their 2x 8GB Vengeance 2400 MHz DDR4 SODIMM kit (the NUC only configured it for operation at 2133 MHz, though).

The Intel NUC6i5SYK kit obviously doesn't come with any pre-installed OS. Drivers are available online only. In addition to the main unit, the other components of the package include a 65 W (19V @ 3.43A) adapter, a US power plug, a VESA mount (along with the necessary screws), user manual and a quick-start guide. The kit also includes a promotion for McAfee LiveSafe, but, thanks to the barebones concept, there is no 'bundled bloatware'. 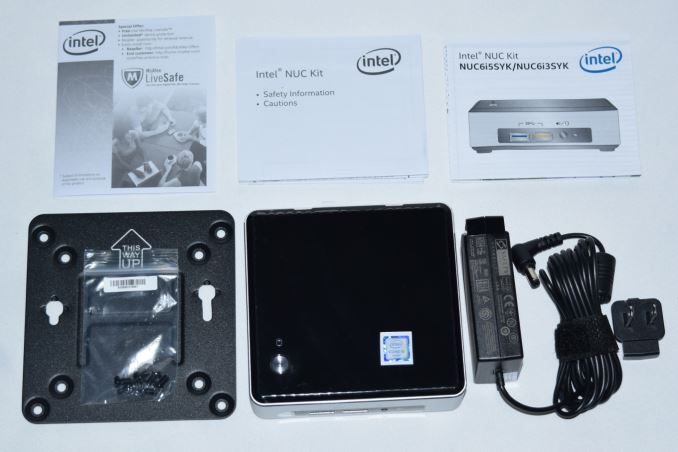 The gallery below takes us around the hardware in the unit.

In the interest of full disclosure, it must be stated that all the benchmark numbers and usage impressions presented in the next few pages are based on the second unit that Intel sent us. Long story short, our first review sample got bricked due to a botched BIOS update, and Intel sent us a pre-configured unit the second time around. However, all benchmarking was eventually done with our own choice of NVMe SSD and DDR4 SODIMMs.

On the first sample (using SODIMMs and a SSD different from what we eventually used), we were not able to install Windows 10, as the unit ended up BSOD-ing within a couple of minutes of starting the installation process. A search online indicated that we were not alone in experiencing such problems. The BIOS version on that sample (0028) was also quite dated. Fortunately, Intel had already seen such issues and indicated that it was due to the DDR4 SODIMM being based on 2133 MHz Hynix modules. The latest BIOS - 0036 - has a new setting in BIOS (Memory tab in Performance) for Round Trip Latency. Disabling this would apparently allow for these SODIMMs to work properly. Unfortunately for us, the BIOS update process ended up getting hung, and a power cycle after 20 minutes bricked the unit. Playing around with the BIOS jumper on the board couldn't recover the unit, and we had to move to the second unit for further benchmarking.

For the second unit, we made sure to use non-Hynix modules. Corsair's supplied SODIMM kit was using DRAM from Samsung, and the second sample that came in already had the latest BIOS (0036) on it. This time around, Windows installed fine. Everything was checking out OK, but, when we started running PCMark 8 workloads, the unit ended up freezing. Our assumption was that Windows update had installed the latest graphics drivers, but, it turned out that we had to manually update it from 4331 to 4352. Updating the drivers helped resolved the freezing issue. After both these showstopper issues were resolved, we were able to proceed with our evaluation process.

The Skylake NUCs differ from the previous NUCs even from the viewpoint of the chassis, but, before going into that, let us take a look at the Skylake-U platform that enables the updates. The PCH (Sunrise Point-LP) and the processor are integrated in the same package, even though the PCH is fabricated in 22nm, while the processor is in 14nm. The Skylake-U platform has plenty of updates (as shown in yellow in the slide reproduced below), but, relevant to the Skylake NUC is the availability of SDXC 3.0 support in the PCH. Skylake-U also obviously supports DDR4 (as the NUC6i5SYK only supports that), but that is not mentioned in the slide below. 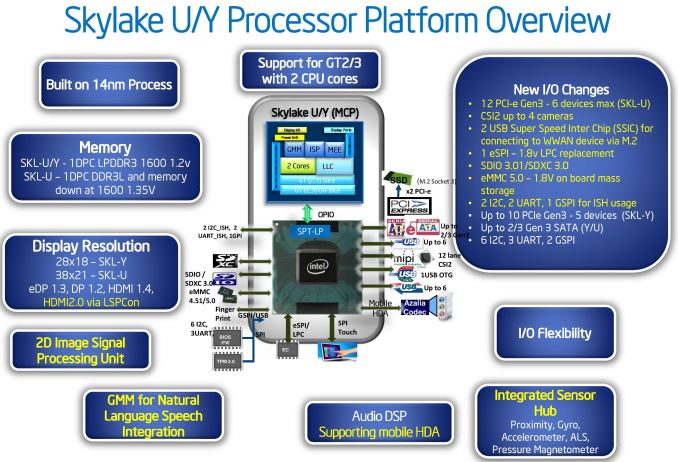 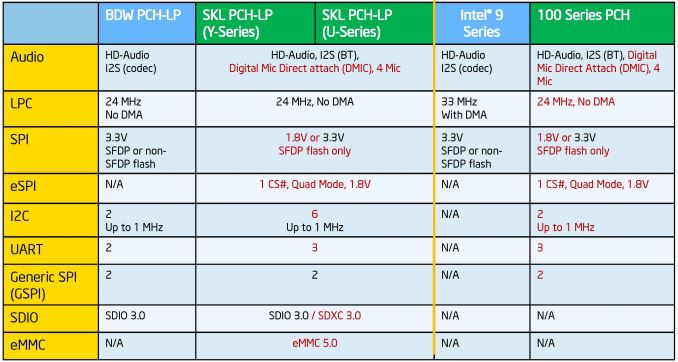 In terms of external design, we have a SDXC slot with support for UHS-I on one side. The HDMI port finally becomes full-sized. The consumer infrared sensor is retained in the front panel. Given that Intel is open to having I/O ports in the side panel, it might not be a bad idea to have a USB 2.0 port or two on one of the sides.

In the table below, we have an overview of the various systems that we are comparing the Intel NUC6i5SYK against. Note that they may not belong to the same market segment. The relevant configuration details of the machines are provided so that readers have an understanding of why some benchmark numbers are skewed for or against the Intel NUC6i5SYK when we come to those sections.