In terms of motherboard output, there seems a clear dichotomy between AMD based motherboards and Intel motherboards. Innovation starts on the higher selling Intel ATX products, whereas AMD is more focused on smaller form factors. With the Kaveri APUs moving to more integrated graphics power, this makes sense. However some of those high-end innovations do make it over to the AMD + ATX crowd, which is what GIGABYTE has done with the F2A88X-UP4. The F2A88X-UP4 is an AMD FM2+ motherboard with reinforced power delivery which we are reviewing today.

One of the first comments that came out of the FM2+ motherboard stack when the Kaveri APUs were launched was the temperature of the power delivery of the motherboard. This was mostly aimed at FM2+ motherboards that had been released before Kaveri APUs came to market.  Although those products were still within workable temperatures, the 28nm SHP process used by AMD behaved a little differently to Richland. As a result, some manufacturers came out with new products at the time of the launch of the Kaveri APU designed to deal with the heat generated by the power delivery better. GIGABYTE’s answer at the high end of their product stack was the F2A88X-UP4. As a result of the almost over-engineered aspects of the power delivery, I cannot fault the heatsink arrangement for the motherboard. We have an extended heatpipe arrangement from the main socket area down to the large chipset heatsink, and thermal temperature readings at stock settings gave 38.5ºC during extended CPU load with a 24ºC ambient. 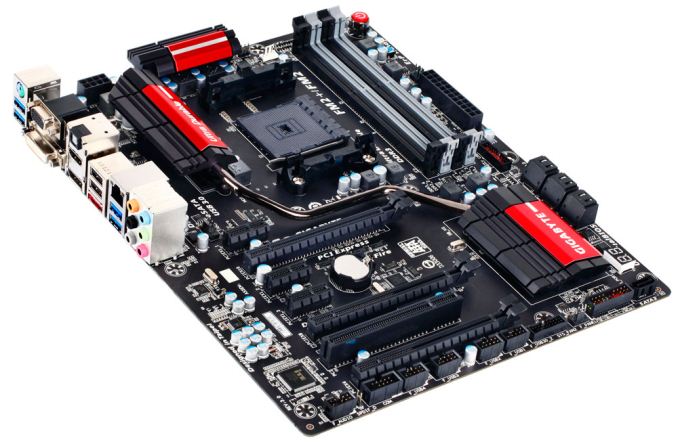 GIGABYTE uses dual BIOS technology for its AMD range, and on the F2A88X-UP4 we also get a total of eight USB 3.0 ports.  Two of these are onboard headers (giving four ports) and the other four ports are on the back panel. This is particularly useful for the series of cases coming onto the market that now have four USB 3.0 ports on the front, requiring two internal headers. However the back panel ports are by the VIA controller rather than the chipset, making it a little frustrating to install an OS via USB with both mouse and keyboard operational via the back panel alone.  Despite this being a $105 product, it is good to see power/reset buttons and a two-digit debug display. The audio uses the Realtek ALC892 codec, and for networking a Realtek NIC is present on the back panel.

The software situation for GIGABYTE on FM2+ and A88X is the same as on FM2 and A85X. Classic mode from the Intel line is the default graphical BIOS, with options for CPU, DRAM and voltages in separate menus. The software for Windows uses the older GIGABYTE EasyTune 6, which we had to request an updated version from GIGABYTE as there is an issue related to the overclocking of the integrated graphics and in order to work, our version had it disabled. It should also be noted that the F2A88X-UP4 older BIOSes are not forward compatible – when I received the motherboard it came with the F2 BIOS which did not support Kaveri APUs. The BIOS itself would not accept an updated BIOS which enabled Kaveri, so I had to install a Richland APU, install Windows, install the @BIOS software to flash the latest BIOS, flash then reinstall the OS with Kaveri to maintain review consistency. It would therefore make sense to check the retailer if the BIOS of the motherboard is updated to a Kaveri capable BIOS before purchasing.

In terms of benchmark scores, the GIGABYTE F2A88X-UP4 trades blows with our other FM2+ motherboard we have tested, but has fewer temperature related issues. Our previous review motherboard was the same price as the GIGABYTE, but in exchange for the stronger audio codec, the F2A88X-UP4 has a better power delivery.  The GIGABYTE software scenario is also a dichotomy, with the AMD software stack behind GIGABYTE’s Intel offerings.  Ideally a mesh of the two FM2+ motherboards we have tested would put FM2+ in the right direction.

From the 8-series launch, GIGABYTE’s styling on UD/UP series of motherboards has started to become individual with a single color paired with black. The UD7 range is brown and black, the UD5 range is gold and black, the UD4/UP4 ranges are red and black and the UD3 range is  blue and black. 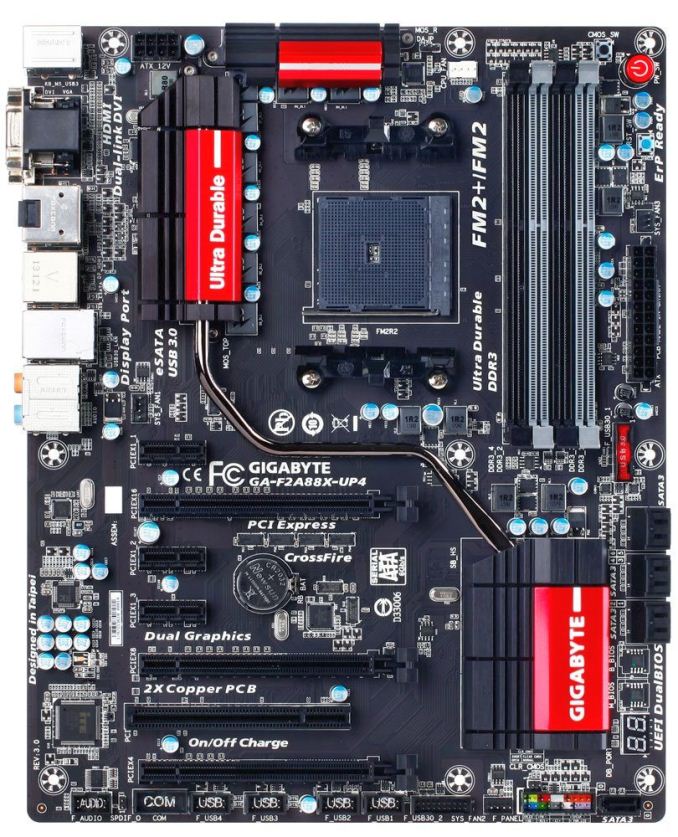 The initial standout feature on the F2A88X-UP4 is most likely the extended heatpipe arrangement in this color scheme. The heatpipe travels from the left-side heatsink down to the chipset heatsink, covering power delivery, the chipset and an extra controller. Underneath the power delivery heatsinks are the stylized 60A chokes we have seen on high end GIGABYTE motherboards in the past. These are often quoted to be tuned to the product, and paired with International Rectifier IR355x ICs, either 40A or 60A rated. The combination of the two contributes to GIGABYTE’s ‘Ultra Durable 5 Plus’ rating on this motherboard, along with eight USB 3.0 ports and other features.

Moving clockwise, the DRAM slots are color coordinated and are double side-latched to secure memory in. Normally I prefer single side-latched due to large GPUs in the first PCIe slot, however as this motherboard starts with a PCIe 2.0 x1 slot, this is not an issue here. In the top right corner of the motherboard we have a small black BIOS clear switch, a big red power button, and a small blue reset button. The two-digit debug which is usually with these buttons is actually at the bottom of the motherboard next to the chipset heatsink.

Moving below these buttons and the 24-pin ATX power connector is one of the USB 3.0 headers. Both of the USB 3.0 headers are powered by the chipset, however this first one is backed in red showing that these ports will charge when the machine is in lower power states but still plugged into the mains. Underneath are six of the SATA 6 Gbps ports from the chipset, the two soldered on BIOS chips for dual BIOS, and the two-digit debug display. A seventh SATA 6 Gbps port is right at the bottom of the motherboard. 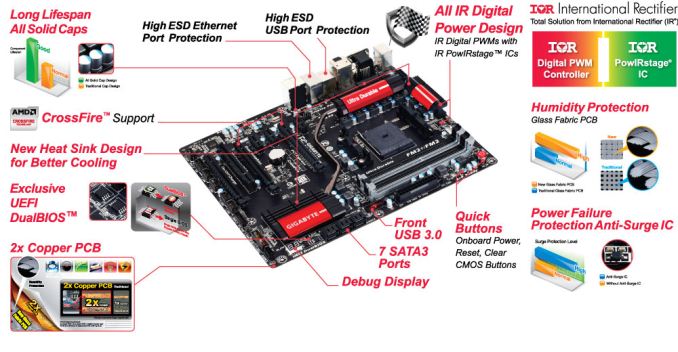 Schematic from GIGABYTE’s page on the F2A88X-UP4

Along the bottom of the motherboard are four USB 2.0 headers, another chipset powered USB 3.0 header, a COM header, the front panel headers and an aforementioned 4-pin fan header.

The PCIe layout is designed for dual large devices, such as GPUs, as well as a minor PCIe device. From the top is an x1 slot, x16, x1, x1, x8, PCI, x4. When a device is plugged into the x8 slot, the x16 slot drops to x8 speeds due to lane allocation. As this is an FM2+ motherboard, the system will not support SLI configurations. For CrossFire configurations users can use an x8/x8 layout with a third GPU in the PCIe 2.0 x4 slot at the bottom, however this is routed through the chipset and will not guarantee perfect scaling. As the motherboard does not have an additional power connector, a third GPU in this slot might not get enough power for gaming. We came across this issue in our five gaming tests where the PCIe 2.0 x4 slot reported x1 bandwidth.

The rear panel connectors are listed above, with the USB 3.0 ports being powered by a VIA controller. This means that during an OS installation they will be unusable for mouse/keyboard operation. I usually install an OS via a USB stick, which requires a USB 2.0 (or compatible USB 3.0) port, and this arrangement makes that process a little awkward. The Ethernet and audio jacks are both powered by Realtek controllers, a combination that usually awards the motherboard manufacturer with a small discount compared to buying the controllers separately.

The extended heatsink arrangement is a big plus for the F2A88X-UP4, as we only saw the heatsink reach 38.5ºC. Having eight USB 3.0 ports in total is good for newer cases that use dual USB 3.0 connectors for their front panel, however it means the speed of the USB 3.0 ports at the back is not optimal. I would have preferred a mix and match in this regard. The use of the Realtek ALC892 codec seems to be a standard GIGABYTE choice for this price bracket, although other manufacturers' products in this area have gone for the ALC898 or ALC1150. GIGABYTE has chosen to focus their budget on the power delivery instead.