Back when the 8800GT was launched, 512MB of video memory is all we needed. To have 2GB, 3GB or 4GB on a video card seemed like overkill. Fast forward several years and those latter capacities are now the norm for anyone spending $100+ on a discrete graphics card. So does an 8GB graphics card seem like overkill today?  When I look at 4K UHD panels slowly entering the market, and the prevalence for high end gamers to run multi-monitor setups, I would postulate that 8GB of video memory is only the start, especially as memory manufacturing and die shrinking continues. To that end, and perhaps to the delight of AMD-based compute, Sapphire showed off two R9 290X models at CeBIT this year to Kitguru, both with 8GB of GDDR5. 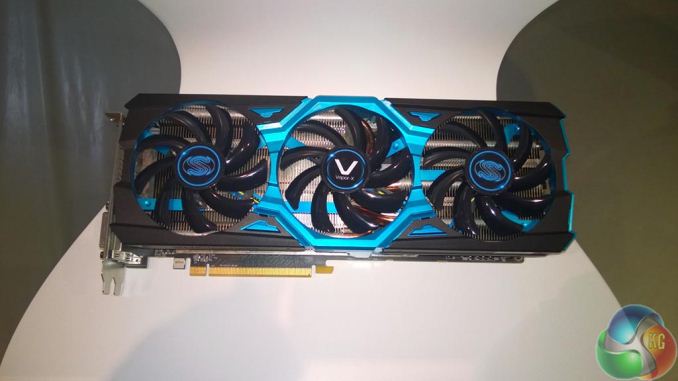 First up is the Vapor-X model, featuring a 2.5 slot cooler with three fans in a blue shroud. The second is the Toxic Edition, which to the eye looks identical apart from the yellow coloring. 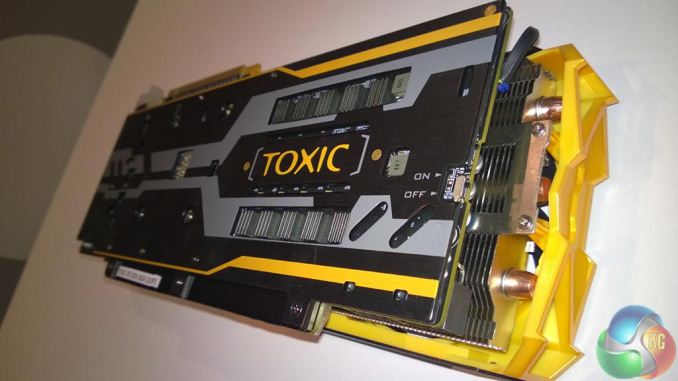 Video outputs seem to be a dual DVI, HDMI and DisplayPort. No word on GPU or memory frequencies; however given their branding I would expect the Toxic to be a higher clocked part. For reference, the R9 280X Toxic is at 1100 MHz core (1150 MHz boost), whereas the R9 280X Vapor-X is at 950 MHz core (1070 MHz boost).  Ryan reviewied the R9 280X Toxic at the end of last year - read his review here. These are also set to be limited edition models, pricing and release date as yet unknown but due to the higher memory cost these cards will pack a price premium.   The on/off button at the rear of both of these cards may be their dual VBIOS functionality - if users are in a UEFI environment, this will switch the BIOS to the UEFI mode for faster booting.

It is a shame that these are going to be limited edition cards, as it does offer that bridge between a high end consumer compute card with a lot of memory and the full-blown AMD FirePro branding. Even saying that, the number of FirePro cards with more than 8GB is rather limiting – an S10000 12GB was announced at the end of last year and further down the product stack there are a few 6 GB models.