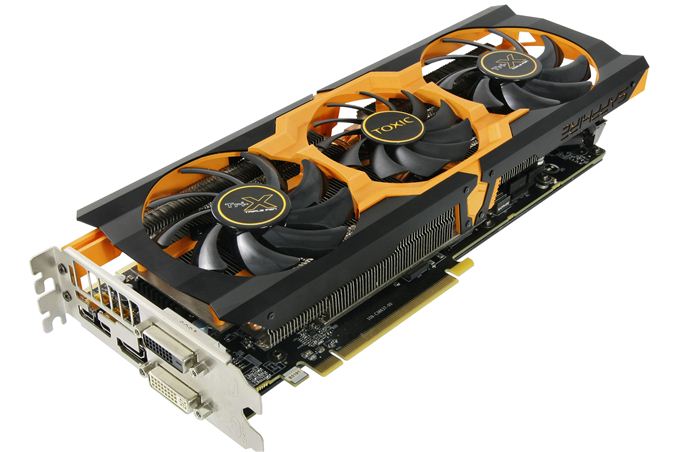 With AMD’s Radeon R9 280X being based on the company’s now venerable and battle-tested Tahiti GPU, AMD’s partners have wasted no time in releasing fully customized products for AMD’s new lineup. Whether it’s reusing a tried and true design from the 7970 and 7970 GHz Edtion, or coming out with a new design entirely, everyone is doing something to make their card unique. In fact you won’t even find a reference card for the 280X launch; everything is custom from day one.

Of course it’s not just boards and coolers that can be adjusted. With nearly 2 years knowledge on the performance characteristics and yield curves of the Tahiti GPU, partners aren’t wasting any time in releasing aggressively clocked designs in their first salvo. We’ve already seen Asus make their first move with their R9 280X DirectCU II TOP, and they won’t be alone. But of all the designs being released in the next week for the 280X, none that we’re aware of are quite as aggressive as what Sapphire will be going for with their 280X Toxic.

Clocked at 1100MHz for the base GPU clock and 1150MHz boost GPU clock, with the their 280X Toxic Sapphire is aiming to have the fastest 280X card on the market. This is 250MHz (29%!) faster than the stock 280X at base clockspeeds, and 150Mhz (15%) faster under full boost. This is a very high and very narrow range of clockspeeds that according to the various 280X card specs we have so far makes the 280X Toxic the highest clocked card on the market, and one that will always be performing very close to its peak clockspeeds thanks to that narrow boost range. To that end 1150MHz is by no means unheard of for a Tahiti overclock, but by our reckoning it is towards the tail end of what a good Tahiti GPU can do under a reasonable voltage and air cooling, so Sapphire dipping well into the tail end of the yield curve to bring this card together. In any case, complementing the GPU overclock is a smaller memory overclock of 400MHz (7%) to keep the GPU fed.

Meanwhile cooling Sapphire’s highly clocked beast is a new cooler design out of Sapphire that is not necessarily the largest of the dual-slot GPU coolers, but certainly among the longest at 12.25 inches. Dubbed the Tri-X cooler, Sapphire is using a 3 fan asymmetrical design that takes a pair of 90mm fans with an 80mm fan in the center to provide all of the airflow the card needs. In that respect this is fairly typical for a triple fan open air cooler, though making Sapphire one of only a couple of companies to use this design in any product in lieu of a dual fan design.

Located below and measuring just a bit shorter than the fan-shroud is the 280X Toxic’s heatsink, a two segment vertical fin design. Sapphire is using 5 copper heatpipes to move heat between the GPU and the heatsink, with two pipes going to the first segment located over the GPU while the other three go to the segment at the tail end of the card, with the largest of these heatpipes measuring 10mm in diameter and tying it for the largest heatpipes we’ve seen yet.

On the back side of the card we’ll find a backplate that Sapphire has attached to the card and runs the full length of the PCB. There aren’t any components on the back of the card that the backplate provides direct cooling for, but it does provide another heat outlet for the MOSFETs on the front of the card, with a strip of thermal material connecting the backplate to the location on the PCB where the MOSFETs are. The backplate also provides some protection for the chokes Sapphire has placed on the back of the card, as the backplate sticks out farther than the chokes. Meanwhile for those who like to show off or otherwise have their video card visible, on the back we’ll also find Sapphire’s LED temperature LEDs, a series of 6 LEDs that will light up in accordance with the GPU temperature.