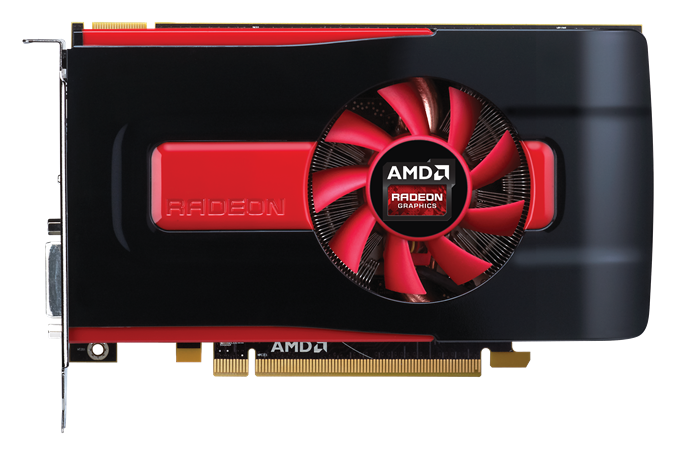 In an industry that has long grown accustomed to annual product updates, the video card industry is one where the flip of a calendar to a new year brings a lot of excitement, anticipation, speculation, and maybe even a bit of dread for consumers and manufacturers alike. It’s no secret then that with AMD launching most of their Radeon HD 7000 series parts in Q1 of 2012 that the company would be looking to refresh their product lineup this year. Indeed, they removed doubt before 2012 even came to a close when they laid out their 8000M plans for the first half of 2013, revealing their first 2013 GPU and giving us a mobile roadmap with clear spots for further GPUs. So we have known for months that new GPUs would be on their way; the questions being what would they be and when would they arrive?

The answer to that, as it turns out, is a lot more complex than anyone was expecting. It’s been something of an epic journey getting to AMD’s 2013 GPU launches, and not all for good reasons. A PR attempt to explain that the existing Radeon HD 7000 series parts would not be going away backfired in a big way, with AMD’s calling their existing product stack “stable through 2013” being incorrectly interpreted as their intention to not release any new products in 2013. This in turn lead to AMD going one step further to rectify the problem by publically laying out their 2013 plans in greater (but not complete) detail, which thankfully cleared a lot of confusion. Though not all confusion and doubt has been erased – after all, AMD has to save something for the GPU introductions – we learned that AMD would be launching new retail desktop 7000 series cards in the first half of this year, and that brings us to today.

Launching today is AMD’s second new GPU for 2013 and the first GPU to make it to the retail desktop market: Bonaire. Bonaire in turn will be powering AMD’s first new retail desktop card for 2013, the Radeon HD 7790. With the 7790 AMD intends to fill the sometimes wide chasm in price and performance between their existing 7770 (Cape Verde) and 7850 (Pitcairn) products, and as a result today we’ll see just how Bonaire and the 7790 fit into the big picture for AMD’s 2013 plans.

Diving right into things like always, Bonaire is designed to be an in-between GPU; something to go between the 10 Compute Unit Cape Verde GPU, and the 20 CU Pitcairn GPU. Pitcairn, as we might recall, is almost entirely twice the GPU that Cape Verde is. It has twice as many shaders, twice as many ROPs, twice as many geometry processors, and twice as wide a memory bus. Not surprisingly then, the performance gap between the two GPUs at similar clockspeeds approaches that two-fold difference, and even with binning and releasing products like the 7850 this leaves a fairly large gap in performance.

As AMD intends to carry the existing Southern Islands family forward into 2013, their strategy for the mid-to-low end of the desktop market has become one of filling in that gap. This is a move made particularly important for AMD due to the fact that NVIDIA’s GK106-powered GeForce GTX 650 Ti sits rather comfortably between AMD’s 7770 and 7850 in price and performance, robbing AMD of that market segment. Bonaire in turn will fill that gap, and the 7790 will be the flagship desktop Bonaire video card. 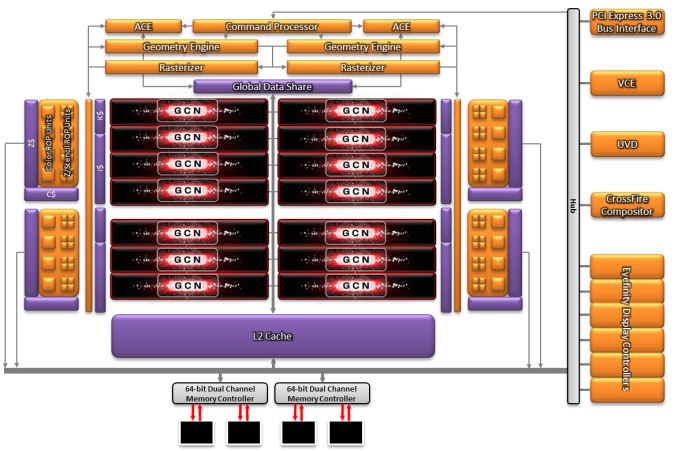 So what are we looking at for Bonaire and the 7790? As the 7790 will be a fully enabled Bonaire part, what we’ll be seeing with the 7790 today will be everything that Bonaire can offer. On the specification front we’re looking at 14 CUs, which breaks down to 896 stream processors paired with 56 texture units, giving Bonaire 40% more shading and texturing performance than Cape Verde. As a further change to the frontend, the number of geometry engines and command processors (ACEs) has been doubled compared to Cape Verde from 1 to 2 each, giving Bonaire the ability to process up to 2 primitives per clock instead of 1, bringing it up to parity with Pitcairn and Tahiti. Finally, the backend remains unchanged; like Cape Verde, Bonaire has 16 ROPs attached to a 128bit memory bus, giving it equal memory bandwidth and equal ROP throughput at equivalent clockspeeds.

Moving on to the 7790 in particular, the 7790 will be shipping at a familiar 1GHz, the same core clockspeed as the 7770. So all of those performance improvements due to increases in functional units translate straight through – compared to the 7770, the 7790 has 40% more theoretical compute/shading performance, 40% more texturing performance, 100% more geometry throughput, and no change in ROP throughput. Meanwhile in a move mirroring what AMD did with the 7970 GHz Edition last year, AMD has bumped up their memory clocks. 7790 will ship with a 6GHz memory clock thanks to a higher performing (i.e. not from Cape Verde) memory interface, which compared to the 7770’s very conservative 4.5GHz memory clock means that the 7790 will have 33% more memory bandwidth compared to 7770, despite the fact that the memory bus itself is no wider.

On the power front, unsurprisingly power consumption has gone up a bit. As a reminder, AMD does not quote TDPs, but rather “typical board power”, which is AMD’s estimate for what power consumption will be like under an average workload. 7770’s official TBP is 80W, while 7790’s is 85W. We’ll have our own breakdown on this in our look at power, temperature, and noise, but it’s fair to say that 7790 draws only a small amount of additional power over the 7770. Ultimately this can be attributed to the fact that while Bonaire is a larger chip, it’s not extremely so, with only the addition of the CUs and additional geometry/ACE pipeline separating the two. Mixed with gradual improvements over the last year on TSMC’s 28nm process, and better power management from AMD, and it’s possible to make these kinds of small improvements while not pushing load power too much higher.

On the note of Bonaire versus Cape Verde, let’s also talk a bit about transistor count and die sizes. Unsurprisingly, Bonaire sits between Cape Verde and Pitcairn in transistor count and die size. Altogether Bonaire comes in at 2.08B transistors, occupying a 160mm2 die. This is as compared to Cape Verde’s 1.5B transistors and 123mm2 die size, or Pitcairn’s 2.8B transistors and 212mm2 die size. For AMD their closest chip in terms of die size in recent history would be Juniper, the workhorse of the Evergreen family and the Radeon HD 5770, which came in at 166mm2.

Moving on, as is consistent with AMD’s previous announcements, the 7790 is being launched as just that: the 7790. AMD has told us that they intend to keep the HD 7000 brand in retail this year due to the success of the brand, and to that end our first Bonaire card is a 7700 series card. The namespace collision is unfortunate – sticking with the 7000 series means AMD is facing the pigeonhole principle and has to put new GPUs in existing sub-series – but ultimately this is something AMD shouldn’t have any real problems executing on. We’ll get into the microarchitecture of Bonaire on our next page, but for gamers and other consumers Bonaire may as well be another member of the Southern Islands GPU family, so it fits in nicely in the 7000 series despite being from a new wave of GPUs.

With that in mind, let’s talk about product positioning and pricing. The 7790 will launch at $149, roughly in between the 7770 and the 7850. AMD will be positioning it as an entry-level 1080p graphics card, and though it’s a 7700 series part its closest competition in AMD’s product stack is more likely to be the 7850, which it’s closer to on the basis of both price and performance.

Against the competition, the 7790’s closest competition will be the GeForce GTX 650 Ti. However with the price of that card regularly falling to $130 and lower, the 7790 is effectively carving out a small niche for itself where it will be a bit ahead of the GTX 650 Ti in both performance and in price. NVIDIA’s next card up is the GTX 660, at more than $200. 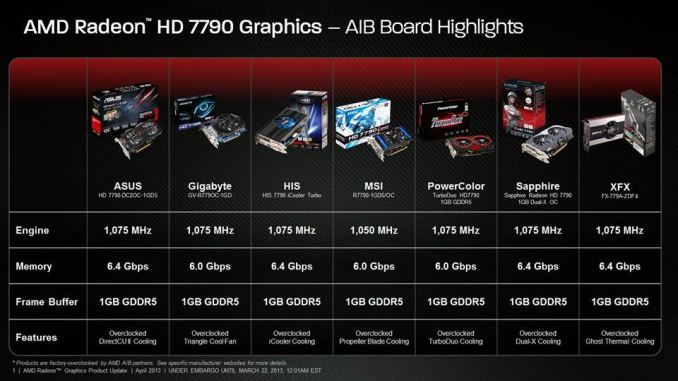 Finally, AMD is wasting no time in extending their Never Settle Reloaded bundle to the 7790. As the 7790 is a cheaper card it won’t come with as many games as the more expensive Radeon cards, but for 7790 buyers they will be receiving a voucher for Bioshock Infinite with their cards. MSRPs/values are usually a poor way to look at the significance of game bundles, but it goes without saying that it’s not too often that $150 cards come with brand-new AAA games.