Two weeks ago AMD officially unveiled the Radeon HD 7800 series. Composed of the Radeon HD 7870 GHz Edition and Radeon HD 7850, AMD broke from their earlier protocol with the 7700 and 7900 series and unveiled the cards ahead of their actual launch in order to beat CeBIT and GDC. The result was a pair of impressive – if expensive – cards that cemented AMD’s control of the high-end video card market. Unfortunately because of this early unveiling you couldn’t buy one at the time.

Those two weeks have now come and gone, and the 7800 series has finally been released for sale. Because AMD’s partners have largely passed on AMD’s reference design for the 7870 series we wanted to take a look at what the actual retail cards would be like; with almost everyone using a custom cooler and many partners using factory overclocks, there’s a great deal of variation between cards. To that end HIS and PowerColor have sent over their top 7870 cards, the HIS 7870 IceQ Turbo and the PowerColor PCS+ HD7870. How do these retail cards stack up compared to our reference 7870, and what kind of impact do their factory overclocks bring? Let’s find out.

Starting first with the PowerColor card, we have the PCS+ HD7870. The PCS+ HD7870 is PowerColor’s high end 7870, and the only semi-custom card the company is making. As indicated by the PCS+ moniker, this 7870 is a factory overclocked card using a custom cooling solution. PowerColor has clocked the card at 1100MHz core and 4.9GHz memory, which is a 100MHz (10%) core overclock and a far less significant 100MHz (2%) memory overclock over the reference 7870. In large part due to the fact that AMD’s Pitcairn GPU overclocks so well on stock voltage, PowerColor isn’t doing any kind of voltage adjustment here, so the PCS+ operates at the same 1.219v as a reference 7870. 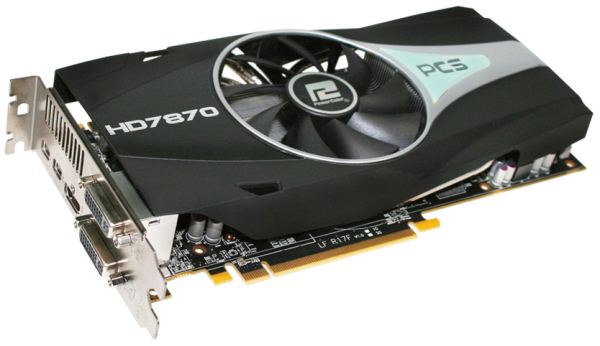 In terms of construction the PCS+ is a semi-custom card, meaning PowerColor is using their own cooler in conjunction with AMD’s PCB. PowerColor’s cooler of choice for the PCS+ HD7870 is a new design for the company, and is effectively a minor variation on the open air coolers we commonly see on sub-200W cards such as the 7870. For the PCS+ heat dissipation is provided by an aluminum heatsink that runs nearly the entire length of the card, which in turn is attached to the GPU through the use of an aluminum baseplate and 3 aluminum heatpipes that provide contact with the GPU.

Meanwhile airflow over the heatsink is provided by a 92mm fan near the center of the card, which is a bit bigger of a fan than the 80mm fans we typically see on open air coolers. The cooler itself is no larger than the card, which means the card’s length is the same as the 7870 PCB at 9.5”.

Looking elsewhere, along the top of the card we find a black metal stiffener, which in the absence of the reference 7870’s full shroud provides structural stability to the card. We still aren’t seeing stiffeners being used regularly enough on these kinds of open air cards, so we’re glad to see PowerColor is going about this the right way. Finally at the front of the card we can see that PowerColor is using the stacked DVI option that the AMD PCB provides, which brings the total number of ports to 5: 2 miniDP, 1 HDMI, 1 DL-DVI, and 1 SL-DVI. The use of the stacked DVI option means that the card only has a half-slot vent, so like most open air coolers most of the hot air the card produces is going to be recirculated inside of the case.

Rounding out the package is the typical video card fare. PowerColor packs in a driver CD and quick start guide, along with a CrossFire bridge, a DVI to VGA dongle, and a miniDP to DP dongle.

Finally, PowerColor has set the MSRP on the PCS+ HD7870 at $370, a $20 premium over regular 7870s and rather typical for a factory overclocked card. The included warranty is PowerColor’s standard 2 year warranty.

Our second card of the day is HIS’s 7870 IceQ Turbo. Like PowerColor’s card this is a semi-custom factory overclocked card, with HIS shipping the card at 1100MHz core and 4.8GHz memory, a 100MHz (10%) core overclock but without any kind of memory overclock. As with PowerColor’s card, the IceQ Turbo ships at 1.219v, the reference voltage for the 7870.

As with all other 7870 cards launching today, all of AMD’s partners including HIS are using AMD’s PCB, making the IceQ Turbo a semi-custom card combining the AMD PCB with a custom cooler. HIS of course is well known for their unusual coolers and the IceQ cooler is no exception. This is the same IceQ cooler that HIS uses on their existing 7950 IceQ products, and is itself an evolution of the IceQ cooler from their 6900 series cards. 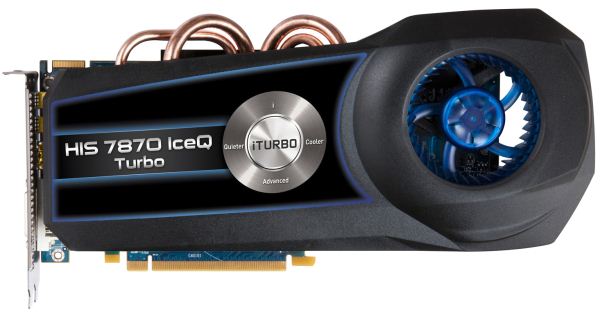 Like those coolers, the IceQ on the 7870 is what’s best described as an open air blower – a radial fan at the end of the card pushes air towards the front of the card, however the shroud isn’t sealed as with a typical blower. Instead the shroud is sealed as normal at the rear and open near the front of the card, allowing some hot air to recirculate while the rest of the air is pushed out. Furthermore the fan is raised as opposed to being flush with the PCB, allowing HIS to use a larger fan and also allowing them to pull in air from both above and below the fan. This in turn makes the card a de facto triple wide card, as the card becomes wider than two slots near the back of the card where the fan is located.

The airflow from this unique blower is in turn channeled over a more typical aluminum heatsink that runs along roughly half of the card. The heatsink in turn is connected to a copper baseplate through the use of 4 copper heatpipes. As the IceQ’s half-blower design doesn’t provide any airflow over the RAM, a secondary aluminum baseplate that is connected to 2 of the heatpipes runs around the GPU, under which the RAM is connected through the use of thermal pads, thereby providing cooling for the RAM. Airflow for the electronic components elsewhere on the card is provided by a combination of airflow going into the blower at the rear, and airflow coming out of the shroud at the front.

As the IceQ cooler is mounted like an open air cooler, the cooler does not provide any structural support for the card. In place of that is a stiffener running along the top of the card, similar to what we saw on the PowerColor card and a necessary component given the amount of flex the gap between the cooler and the PCB would allow. Buyers will want to take note that because the IceQ Turbo is using AMD’s reference PCB, the PCIe power sockets are still at the top rear of the card, so plugging and unplugging the card can be tricky due to a lack of finger space. On that note because this is the same IceQ cooler as on the 7950, it’s oversized relative to the 7870 and overhangs it some as a result. Besides making this a triple wide card, this cooler also makes the total length of the card around 11.25” long, so make sure you have plenty of space as this is a larger card than even the reference 7970. Finally, display connectivity is the same as with the reference 7870, with HIS offering 2 miniDP, 1 HDMI, and 1 DL-DVI port, and opting not to use the stacked DVI option so that a full size vent is present.

Wrapping up our look at the cooler, it’s bears a quick mention that HIS is also promoting the IceQ cooler as a superior cooler for CrossFire operation. The fact that it’s a triple wide cooler has a lot to do with this – give any card 3 slots of clearance versus 2 slots and it’ll do better – but HIS is convinced that the raised design of the fan (which essentially guarantees a certain amount of space for sucking in air) makes it especially potent for CrossFire. Being a triple wide card makes this a niche market – not many boards have PCIe x16 slots spaced exactly that far apart (ours included) – but on paper the potential is clearly there, particularly if for whatever reason you can’t use 4 slot spacing. 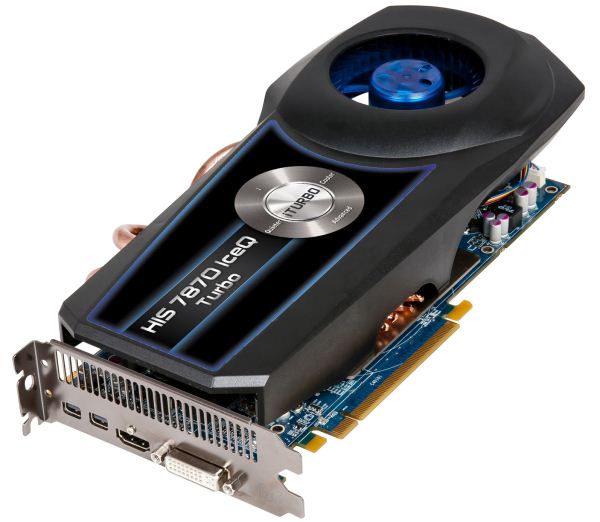 Rounding out the package, HIS includes a driver disc and quick start guide, a CrossFire bridge, a DVI to VGA dongle, and has been common with high-end HIS cards for some time now, their self-titled weight lifter. The weight lifter is a simple plastic jack that is designed to stick to the motherboard and provide support for the far end of the video card. While we’ve seen some troublingly heavy video cards in the past, the 7870 IceQ Turbo is not among them, and unless you’re chucking your computer like a pumpkin the PCIe slot and bracket should provide ample support even with the long cooler. So the weight lifter is largely a gimmick in this case.

HIS also includes the latest version of their iTurbo software, which is an above average overclocking suite. There’s nothing you haven’t seen here before – it appears to be built on the same platform as Sapphire’s Trixx – but it’s an easy to use overclocking utility that does the job; seasoned overclockers however may find the lack of logging an issue. Custom fan profiles are supported, and while overvolting is listed as supported, Sapphire’s software doesn’t actually know how to control the VRM circuitry on a 7870 yet. 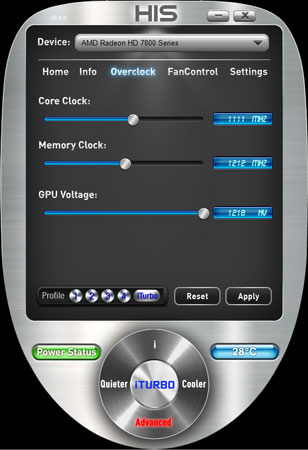 One interesting feature is that HIS provides an automatic overclocking function that’s also named iTurbo. Unfortunately it’s a straightforward 1% core and memory overclock, which is unlikely to introduce any stability problems but also has a nearly imperceptible impact on the card’s performance. You’d best be served by ignoring the iTurbo function and dialing in settings by hand.

Finally, HIS will be setting the MSRP on the 7870 IceQ Turbo at $389, $40 above regular 7870s and making it one of the most expensive 7870s on the market. Meanwhile the warranty on the card is HIS’s standard 2 year warranty.