Every time a new GPU launches, it finds its way into half a dozen or more cards from different manufacturers. These manufacturers do their best to differentiate these cards from one another, usually by means of different fans, form factors, outputs, prices, or even a built-in overclock. It can sometimes be difficult to keep these differences straight - price comparisons are usually pretty easy to make on sites like Amazon or Newegg, but information about dimensions and clock speed can be more difficult to come by. So, I'd like to try something a little different.

I'd like to gather all of the information on these cards that I can from press releases, manufacturer product pages, and retailer sites, put it all in one place in an easy-to-parse format, and then distill it to help all of you make better buying decisions. This shouldn't be confused with one of our in-depth hardware reviews, nor am I necessarily trying to recommend one card over another - while one person may want a larger cooler or a higher stock clock, another person may need the shortest card they can find for a cramped case. If you find this helpful (or if it's missing something important that would make it more helpful to you), please give me feedback and let me know what you'd like to see!

The GPU I'm looking at today is the newly-released (and recently reviewed) NVIDIA GeForce GTX 560 Ti with 448 Cores, a low-end enthusiast card that trades blows with AMD's Radeon HD 6950 in most of our benchmarks (though it consistently beats the 6950 in the "longest, silliest name" benchmark). At present, there are five of these cards available on Newegg: one each from MSI, Gigabyte, and Zotac, and two from EVGA. The table below lays out the important numbers for you.

Common to all of these cards is 1280MB of GDDR5 memory on a 320-bit bus, dual-slot coolers, and manuals with driver CDs (though I imagine most of you reading this will toss out the manual and get new drivers directly from NVIDIA, as well you should). Now that we have all of the data, let's analyze it. 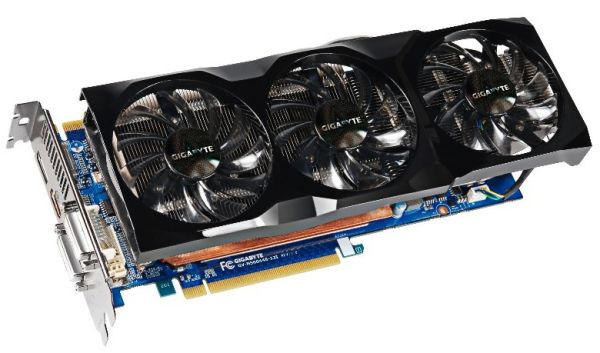 Gigabyte's card, the second most expensive of this bunch, is the only one to pack three fans, and as a result the card is just a couple of millimeters short of being the longest in our group (ASUS' massive cooler edges it out; more on that in a bit). This cooler, called the "Windforce 3X" in Gigabyte's press release, uses a vapor chamber to circulate heat. The three fans are said to be "ultra quiet" but no specific noise levels are given.

Despite this impressive cooling solution, Gigabyte adheres to NVIDIA's reference clock speeds for both the core and memory. I imagine that cooler could get enterprising overclockers some nice results, but Gigabyte won't be meeting you halfway.

The last item of note is that the Gigabyte card is the only one with a DVI-D port - the others all use two DVI-I ports. Along with its full-size HDMI and DisplayPort options, you should be able to plug just about any display into this thing. 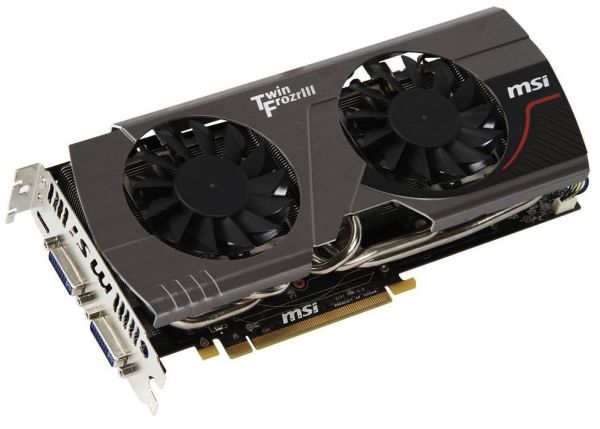 MSI's card, tied with Zotac's offering for third-most expensive, also comes with a fancy cooler, but is 40 mm shorter in length than the Gigabyte card. It's not the shortest card of the bunch, but it's not far off. MSI claims that the cooler, their well-reviewed Twin Frozr III (loving these names, by the way), is both 20 degrees Celsius cooler than the reference design, though "reference" in this case likely means NVIDIA's GTX 570 reference cooler since NVIDIA doesn't have a reference design for the GTX 560 Ti w/448 cores. MSI's specs list the card as being only 30dB loud at full speed - this is very impressive on paper (we recorded 43dB at idle and 47.1dB at load for the Zotac card's single-fan cooler), though keep in mind that this information comes from marketing materials and not hard data.

Unlike the Gigabyte card, this version runs at a very slight overclock - about 8% on the core and 2.6% on the memory. MSI has a product page for an non-overclocked edition that uses NVIDIA's stock clocks, but the OC version is the one that's up on Amazon, Newegg, and other e-tailers as of this writing.

With respect to outputs, this card is one of the most limited here - just two DVI-I ports and a Mini HDMI port (a Mini HDMI to HDMI dongle is included), which has been NVIDIA's common reference configuration for the GTX 500 series. It shouldn't be a problem for most, but if you use DisplayPort you'll want to invest in an adapter.

Correction: We had previously published that the MSI version of this card used an 880MHz core clock and 1002MHz (4008MHz effective) memory clock; the data and our analysis have been corrected.

If you read our GTX 560 Ti With 448 Cores review, this card will be familiar to you - this is the only one of the lot that we've actually had in our hands, and we came away fairly impressed by its performance, its array of outputs, and its cooler. Thanks to this single-fan cooler, it's tied with the EVGA FTW card for the shortest card in the group, but it only sports a modest 4% core overclock. It's also the only card of the lot  with a 2-year warranty instead of a 3-year warranty.

It ties with the MSI card for third-most expensive at $309.99, but it does appear to be the only card in the list that includes a game (Battlefield 3). Note that information on things like this can be hard to come by - the only place where the inclusion of Battlefield 3 is apparent is in our review and in the product photos on Newegg, two resources unavailable for the rest of these cards (for most of the others, Newegg has only pictures of the card and the box). If you don't already have Battlefield 3 and you want it, this card's value becomes much more competitive. 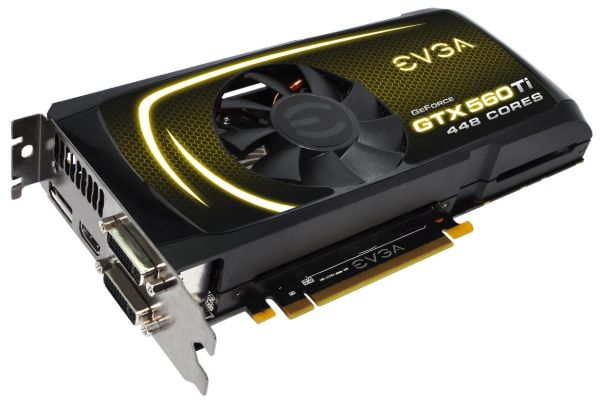 If price is your primary concern, this may be the card for you - of these five, the FTW-series card is the only one selling at NVIDIA's MSRP of $289. Its single-fan cooler ties it with the Zotac for smallest card here. The difference is that the EVGA card appears to use a partially shrouded cooler that only exhausts air out the front and rear, as opposed to the Zotac's open and perforated cooler.

This card's core and memory clocks are just a bit higher than Zotac's, and the same as MSI's: an 8% overclock on the core and a 2.6% overclock on the memory. It's not much, but it's probably worth a few FPS. Output selection is also good - two DVI-I ports, full-size HDMI and a DisplayPort make this a solid-looking card, and if you don't need Battlefield 3 or a fancy cooler you may as well save yourself the $20 (or $25 or $40, as the case may be). 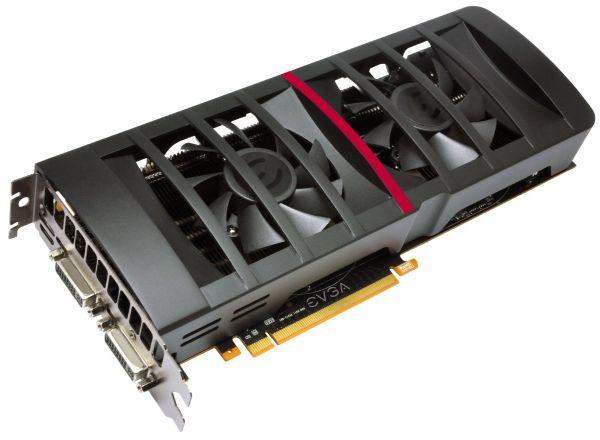 The EVGA Classified card's 8-pin power plug makes it a bit of an oddball - but we suspect EVGA is using a GTX 580 PCB here instead of a GTX 570 PCB as they did on the FTW. The core and memory speeds are the same as in the FTW-series card, so as with the other Classified cards this is really geared towards end-user overclocking rather than a factory overclock.

At any rate, the Classified-series card includes a large two-fan cooler that makes it the third longest in our lineup, though it's less wide than the Gigabyte cooler by a fair amount. For the $10 price difference (this is the third cheapest card here), overclockers may prefer this to the FTW model for its cooling power and PCB, and to the Gigabyte and MSI cards for its slightly lower price, though overclocking speeds are of course never guaranteed.

Compared to the FTW model, DisplayPort users should note that this card regresses a bit in terms of available output - two DVI-I ports and a Mini HDMI port are all that's available, though like the MSI card EVGA is kind enough to include a Mini HDMI to HDMI adapter. 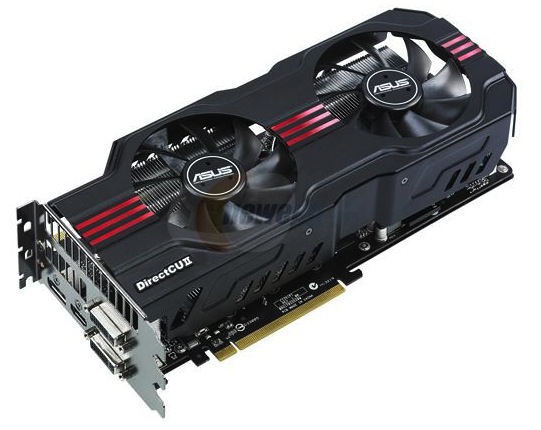 If you thought the Gigabyte card's cooler was big, check out this battleship - the DirectCU II (another great name) is the only card in this lineup with a three-slot cooler, which means the ASUS card is both slightly longer than the Gigabyte card and significantly wider than anything else here. An extended SLI cable is included to accommodate this extra width if you'd like to use more than one of these. ASUS doesn't talk about this dual-fan cooler's noise levels - it does say that the cooler offers "20% cooler performance" and "600% airflow," but it's not exactly clear what the baseline is supposed to be.

Otherwise, this card offers the same output ports as most of the other cards (2xDVI-I, DisplayPort, and HDMI) and runs at stock clock speeds. It's the most expensive card here (at $329.99, taking us to $40 above MSRP), likely because of this large cooler.