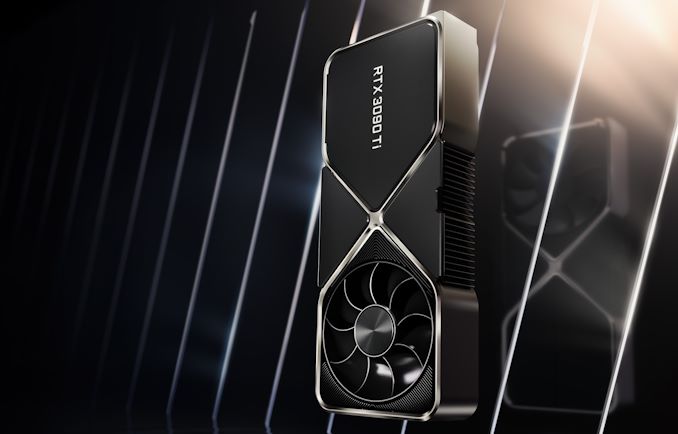 Back in January during their CES 2022 keynote, NVIDIA teased the GeForce RTX 3090 Ti, an even more powerful version of NVIDIA’s flagship card for the high-end gaming and content creation markets. At the time, NVIDIA told us to expect more information later in January, only for January (and February) to come and go without further mention of the card. But now, in the waning days of March, the GeForce RTX 3090 Ti’s day has come, as NVIDIA is launching their new flagship video card today.

So what is the RTX 3090 Ti? In short, it’s every last bit of performance that NVIDIA can muster out of their Ampere architecture – the swan song for an architecture that has carried NVIDIA through the last 18 months. Whereas the original RTX 3090 left a bit of performance on the table for yield or performance reasons, such as a couple of SMs or keeping TDPs to just 350 Watts, RTX 3090 Ti leaves all of that behind. It’s all the Ampere that Ampere can be, with a fully-enabled GA102 GPU, better GDDR6X memory, and few (if any) limits on performance.

But Ampere unconstrained is going to cost you. While the original RTX 3090 launched at an already high $1499, RTX 3090 Ti ratchets that up further to $1999. And ongoing market distortions (i.e. the chip crunch) will likely compound that further, judging from RTX 3090 prices. But regardless, the RTX 3090 Ti isn’t priced to be competitive; it’s priced to be elite. NVIDIA never did produce a true Titan card for this generation, so the RTX 3090 Ti is set to be the next best thing.

This launch also reflects a more recent tendency from NVIDIA to release one last, speed-bumped card towards the latter part of an architecture’s lifecycle as memory technologies improve. The GTX 1080 received a low-key variant with 11Gbps GDDR5X, and now the RTX 3090 Ti is taking a similar tack with its 21Gbps GDDR6X. Neither of these bumps immensely changed the performance calculus for their respective cards, but as video cards are nothing if not perpetually bandwidth starved, the extra bandwidth is one more way to unlock just a bit more performance from these cards.

Diving into the specs, the RTX 3090 Ti is NVIDIA’s forth and seemingly final desktop GA102-based card, and the first card to ship with a fully-enabled GA102. There are no disabled SMs here or cut-down memory busses. All 28 billion transistors are finally in play.

With that said, the net change over the RTX 3090 is 2 SMs – NVIDIA is going from 82 of 84 SMs enabled to all 84 up and running. So the number of additional SMs is not particularly significant from a performance perspective, amounting to a roughly 2.5% increase in SM hardware. Rather, it’s a good illustration of how NVIDIA is employing every technique they can to wring out every last bit of performance from the card, and how they’re comfortable enough with GA102 yields to finally base a product around the fully-enabled chip. 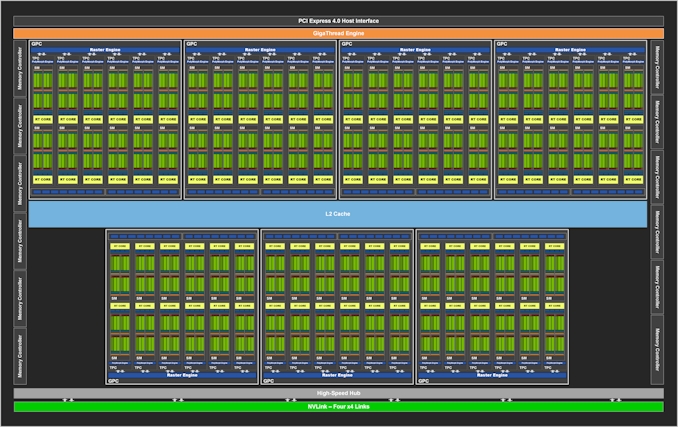 The bigger factor influencing GPU performance is arguably clockspeeds. NVIDIA has raised the base clockspeed to 1.56GHz, and meanwhile the boost clock rating – the average clockspeed of the card in gaming workloads – is now 1.86GHz. That’s a roughly 160Mhz (9%) improvement over the RT 3090’s boost clock, and it applies to all aspects of the chip equally, from the CUDA cores to the ROPs. So everything is getting faster throughout.

In order to keep the even hungrier beast fed, NVIDIA has also stepped up their game with respect to memory technology, and marking one of the few true technological improvements between the original RTX 3090 and the new RTX 3090 Ti. For their new flagship card, NVIDIA is using second generation, 16Gbit GDDR6X memory chips, which have only recently become available. These higher capacity chips can run faster, and they allow NVIDIA to outfit all 24GB of memory using just 12 chips along the front of the card, instead of having to use the 24 chip clamshell configuration that was employed by the original RTX 3090.

The reduction in memory chip counts not only improves power consumption, but it means NVIDIA and partners no longer have to worry about cooling toasty GDDR6X chips on the back of their cards, which was one of the original RTX 3090’s design drawbacks. Instead, everything is on the same side as the GPU, and can be cooled by the card’s massive vapor chamber and heatsink setup.

NVIDIA is also using this opportunity to crank up the memory clockspeeds, going from 19.5Gbps on the RTX 3090 to a flat 21Gbps on the new card. To be sure, this isn’t a massive clockspeed bump, but the extra 8% in memory bandwidth helps to ensure the similarly faster GPU is kept fed, at least to the same degree as the original RTX 3090. However, it does mean that NVIDIA has invested most of their power savings from halving the GDDR6X chip count on higher memory clockspeeds, so there is little overall change in GDDR6X power consumption.

And more so than anything else about the RTX 3090 Ti, “power” is the operative word for the new card. The original RTX 3090, despite its then chart-topping 350W TDP, is still prone to throttling to stay at TDP. In fact, this goes for most Ampere cards; NVIDIA’s GA10x GPUs can generally exceed 2GHz, but they require a whole lot of power to get there. And no card chugs power more than the RTX 3090.

So for their ultimate variant of the card, NVIDIA has updated the RTX 3090 Ti to support a TDP of 450 Watts, a full 100 Watts (29%) higher than the original card. By significantly raising the power limits of the card, the RTX 3090 Ti is designed to be able to run the GA102 GPU at its highest turbo clockspeeds more often – though even then, it’s telling that the game clock is only 1.86GHz. This, above all else, underscores how NVIDIA is looking to wring out nearly every last bit of performance out of GA102; power consumption limits have very nearly been thrown out the window. And yet even then, there are going to be add-in-board partner designs for the RTX 3090 Ti that call for almost 500W. 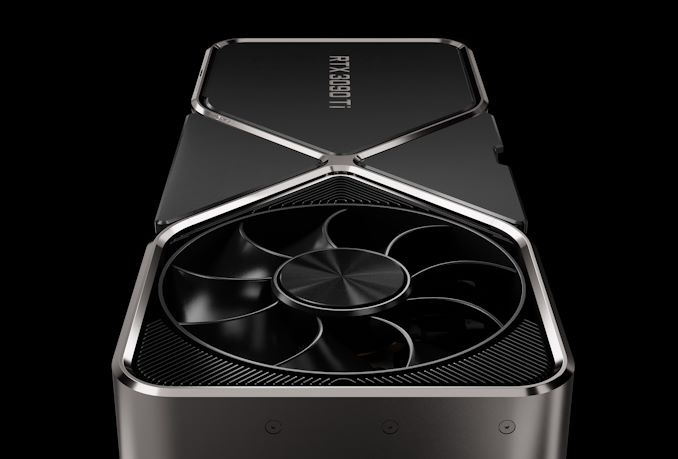 The fact that NVIDIA is going to be shipping a 450W video card is certainly an interesting choice, and one I find a bit worrying. This is almost certainly not going to be the last card to ship with such a high TDP, so this is very much a sign of things to come. And while we’ve long grown accustomed to flagship cards that push things to ridiculous levels, I am very concerned about what this may mean for more mainstream video cards down the line. Video card TDPs have been going up across the board for the last several years, and a 450W flagship card is a sign that it won’t be stopping any time soon. But that’s a discussion for another day.

In order to support this higher TDP, in turn, NVIDIA has updated both their power delivery and cooling systems. On the power delivery front, the RTX 3090 Ti will be the first card to use the new 12VHPWR connector from the just-launched ATX 3.0 power supply specification. The 12VHPWR connector is designed to deliver up to 600W over 16 pins, paving the way for some very high-powered video cards and other accelerators. The 12VHPWR connector replaces the similar 12-pin connector NVIDIA has been using on the other RTX 30 series cards, serving the same function. Though it should be noted that while NVIDIA is using the physical connector, they aren’t making full use of it; RTX 3090 Ti will not be using the variable power delivery aspects, and instead will be operating in 450W mode at all times. 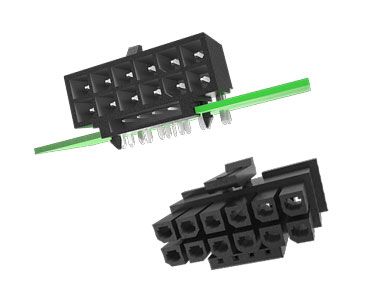 As for cooling a 450W video card, NVIDIA will once more be setting the tempo here with their Founders Edition (reference) card. NVIDIA is once again using their 3-slot cooler from the original RTX 3090, though according to the company they have made unspecified tweaks to their their vapor chamber cooler to improve the cooler’s performance. Still, any improvements in cooling efficiency are almost certainly going to be overshadowed by the card’s greatly increased TDP, so at the end of the day the solution is going to involve moving a whole lot of air to constantly dissipate 450W of heat.

Throughout the entire lifetime of the current RTX 3090, NVIDIA’s flagship GeForce video card has always sat on an odd spot between being a gaming card and being a content creation or compute card. While NVIDIA has a separate line of cards specifically for professional visualization (the A-series cards, aka the former Quadro family), the fastest GeForce (or GeForce-adjacent card) has always served to fill the gap between GeForce and Quadro, for users who need a top-tier card with lots of memory, but not necessarily the extra bells and whistles that come from a ProViz card. In recent years that gap has been covered by the Titan cards, and this generation it’s been the RTX 3090.

Consequently, NVIDIA’s published performance estimates for the new card are chiefly aimed around content creation. Gaming performance is expected to be 9% ahead of the original RTX 3090 and 52% faster than the Turing-based Titan RTX, while rendering performance is anywhere between 42%-102% faster than that same Titan RTX. So along with content creation being a higher priority for NVIDIA, the company is also clearly trying to entice current creators on RTX Titan/2080 Ti to upgrade to the fastest Ampere card. 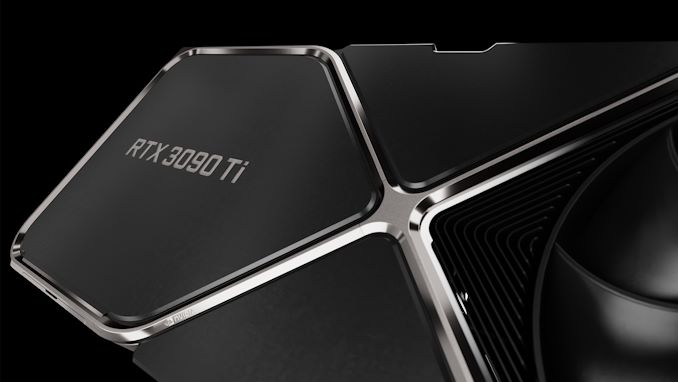 As for the card supply, both NVIDIA and its partners will be supplying cards. NVIDIA is once again producing a “limited edition” Founders Edition version of this card, which in the US will be sold exclusively through Best Buy. And, since the RTX 3090 Ti requires a new power connector and more power overall, NVIDIA’s FE card will come with a 3x8pin adapter, up from the 2x8-pin adapter included with the regular RTX 3090.

Meanwhile the board partners will be doing their own things, as is usually the case with well-established GPUs. The power requirements are going to be similarly high – and the coolers similarly beefy. According to NVIDIA, all of the usual suspects will have cards, and we’ve already seen designed from EVGA, Colorful, and Asus. This includes listings for $1999 base-model cards, but as the GPU market continues to be weird, it’s anyone’s guess how many of those are available and how long they’ll last, even at these prices.

Otherwise, sizing up NVIDIA and AMD’s product stacks, the RTX 3090 Ti all but stands alone in terms of price and positioning. Backstopping it will be the original RTX 3090, which according to NVIDIA will remain in full production (and will need to fall in price to accommodate the new card). And below that will be the RTX 3080 Ti, followed by AMD’s top Radeon part, the Radeon RX 6900 XT.