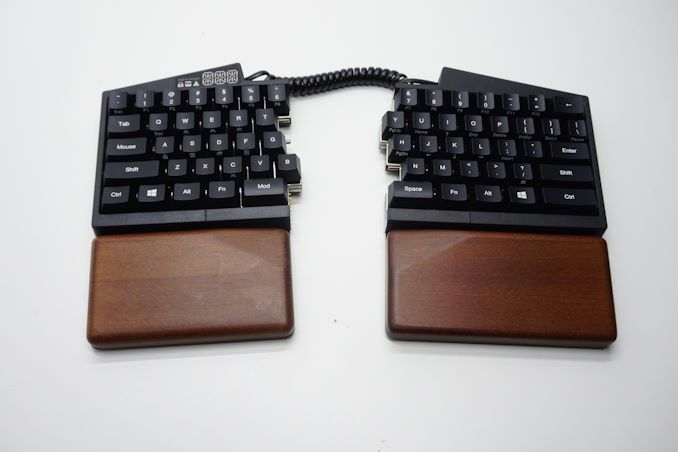 The explosive growth of the mechanical keyboard market over the past several years has led to an overly saturated market, with hundreds of products covering every desire and niche. Competition is certainly a good thing from a consumer’s point of view, but there is relatively little room to differentiate on features when it comes to keyboards, forcing most companies to focus their development and design efforts almost entirely on aesthetics.

Today we are taking a look at a product that (thankfully) breaks away from the norm: the Ultimate Hacking Keyboard. The company, Ultimate Gadget Laboratories, is currently exclusively focused on its development and marketing. It is a 60% mechanical keyboard designed with productivity in mind, implementing unique features and is made in Hungary – but also comes with an exorbitant price tag.

Diving right into matters, we received the Ultimate Hacking Keyboard inside an aesthetically simple cardboard box, with little artwork printed on it, yet very well-designed and practical. The keyboard and its bundle are neatly packed inside. 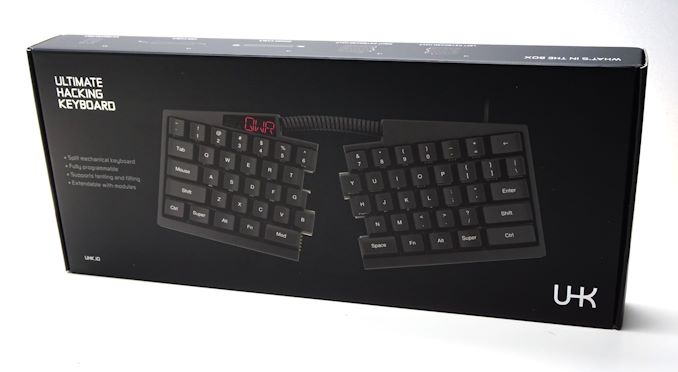 Inside the box, we found a basic user’s manual, one plastic keycap puller, a bag of rubber o-rings, and the keyboard’s USB cable. The o-rings are optional and can be purchased alongside the keyboard. They are meant to reduce the keystroke noise coming from the keycap bottoming down on the body of the switch but they will also reduce the effective key travel. 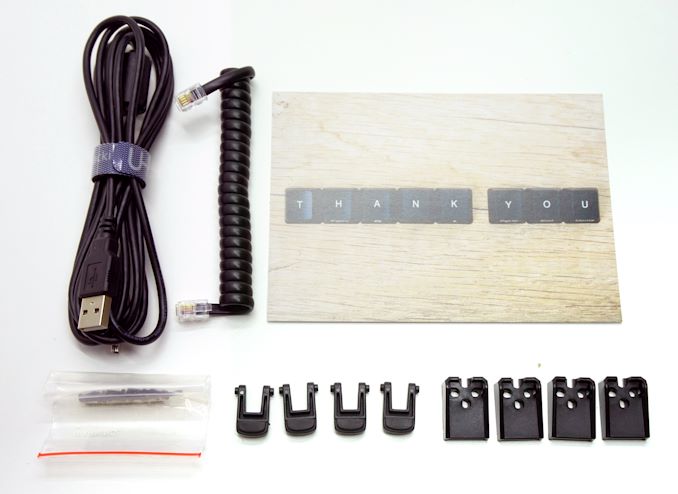 The 60% layout means that the keyboard is missing more than just its Numpad, as tenkeyless designs do. There are no arrow/control keys or a function key row at all. The standard function keys (F1-F12), control keys (Home, End, etc.), arrow keys, and more can be accessed by holding down the Fn key. It will be easy for an expert who has been using such a layout for a while to perform these functions but it will definitely be confusing for amateurs and users who switch between more than one keyboard every day. 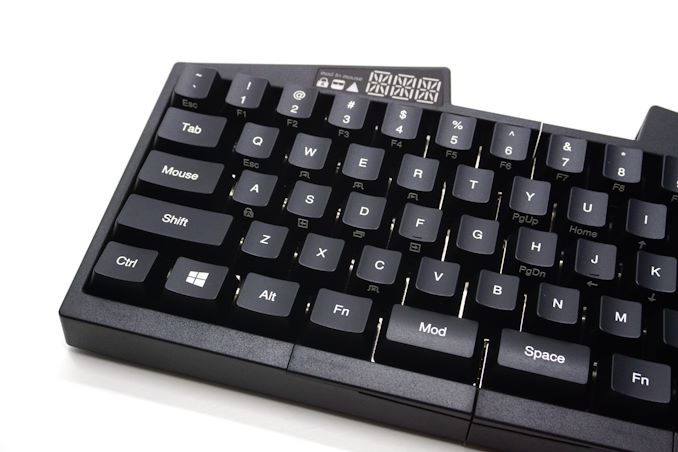 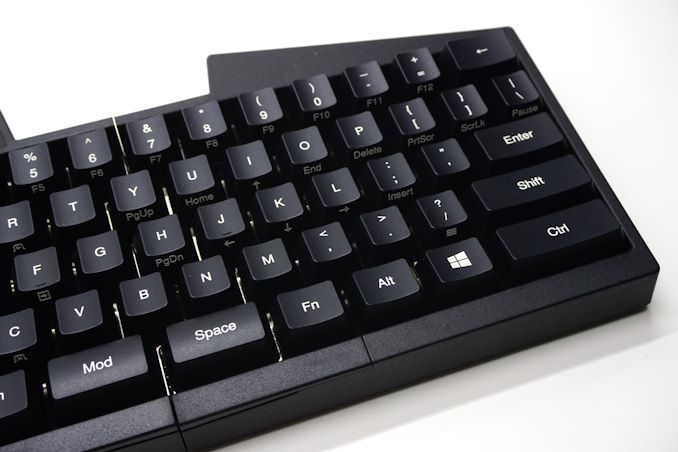 The keycaps of the Ultimate Hacking Keyboard are simple ABS plastic, with the company offering more durable PBT keycaps as an extra. The main keys have their symbols printed right at the center of the keycap, while keys with extra characters have their primary and secondary characters printed towards the bottom and the top of the keycap respectively. Most keys also have a third character/function printed to their front side, which indicates the default function of the key while the Fn key is being held down.

The Ultimate Hacking Keyboard also has two more keys meant for keystroke combinations – the Mod and Mouse keys. The Mod key is to the left of the Space Bar and the Mouse key is where the Caps Lock key is by default. This means that every layout of the keyboard can simultaneously have four different layers – the default layer, the Fn layer, the Mod layer, and the Mouse layer. Using the software, users can also choose for the layers to be active only while the appropriate key is being held pressed, or for a key to permanently toggle the layout to that layer. A seasoned expert can program more functions into a single profile than a regular person can possibly remember.

The 60% layout of the Ultimate hacking keyboard does not follow any established ISO/ANSI standards. The bottom row will appear to be entirely chaotic for most users, with the Space Bar key being smaller than the Ctrl key. There are two buttons below the Space Bar and Mod keys, hidden within the design of the keyboard’s frame. A sizable three-character display can be found at the top left part of the keyboard, next to the subtle indicator LEDs. 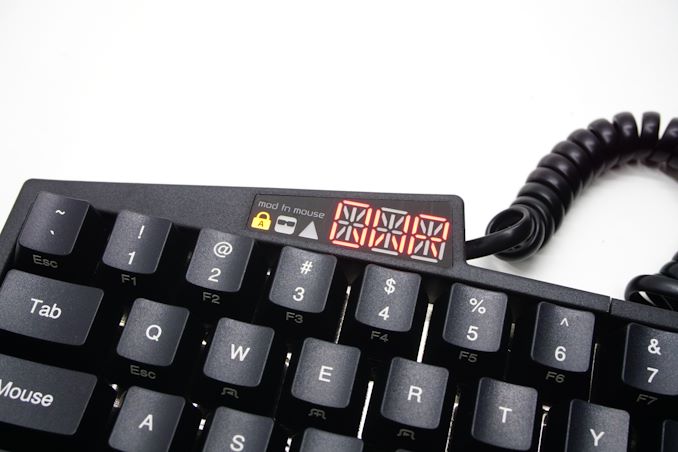 Perhaps the basic feature of the Ultimate Hacking Keyboard is that it can be split in two. The stock cable provided allows for the two halves to be placed up to 30 cm apart, with the company providing instructions on how to make your own cable as well. The keyboard is designed so as to take expansion modules (trackball, touchpad, extra keys, etc.) but none of these modules were available to us at the time of this review.

The company provided us with a set of wrist rests for the Ultimate Hacking Keyboard, which are made of real wood. They are not very soft but certainly feel very classy. These also add the options of tenting and negatively tilting to the keyboard, which can only be positively tilted without the wrist rests attached. 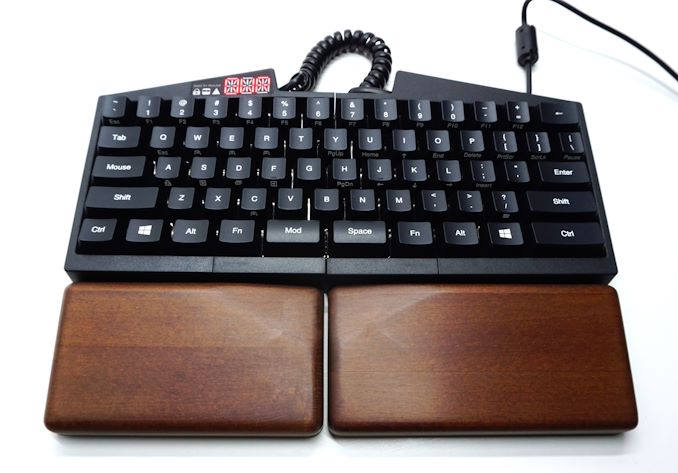 Removing the keycaps of the Ultimate Hacking Keyboard reveals mechanical switches made by Kailh, a huge surprise for a keyboard of this price range. They do offer the keyboard with original Cherry MX switches but only the Green and White variants are available, at no extra cost. Choosing any of the “standard” switches, Red, Blue, Brown, or Black, Kailh switches are the only available option. It is possible that the manufacturer cannot source original Cherry MX switches for some reason and is forced to go with Kailh switches instead. 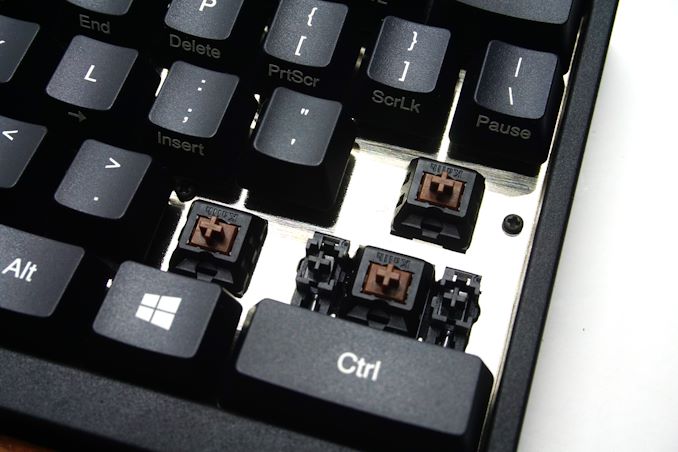 Removing the plastic frame of the keyboard reveals two PCBs with Kailh mechanical switches attached and shiny steel plates providing mechanical support. It is a shame that the keyboard has no backlighting, as we suspect that the polished metal would make it look great at low intensity levels. The assembly job is excellent but the metal is not too sturdy on its own, relying on the thick plastic frame for mechanical strength. 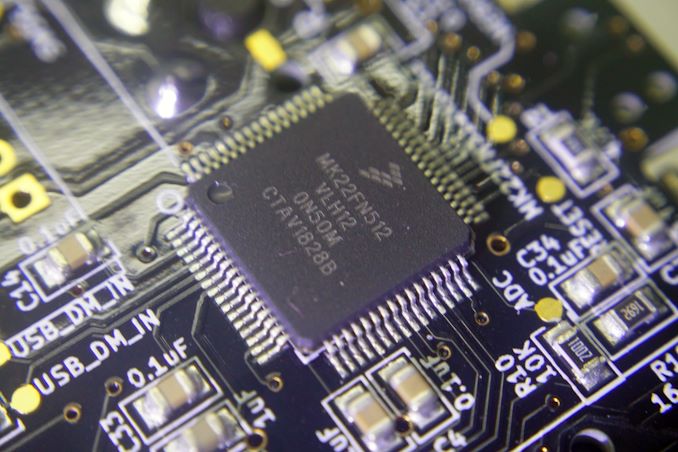